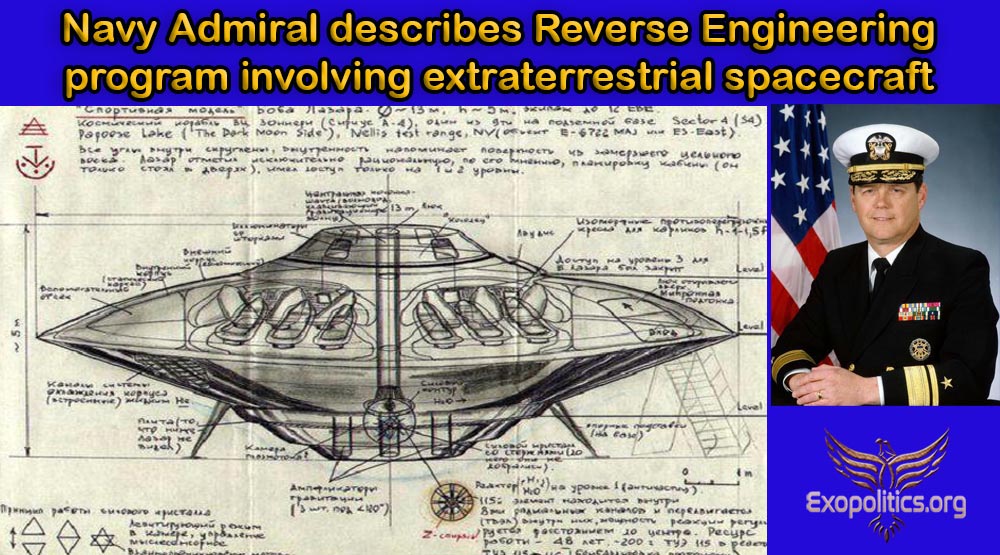 Written by Dr Michael Salla on June 17, 2019. Posted in Featured, science and technology

[Cont. from Part 1] In the transcript/summary of a 2002 conversation between Vice Admiral Thomas Wilson and Dr. Eric Davis it was revealed that a crashed extraterrestrial vehicle was being reverse engineered by a major aerospace company. Wilson first learned about the classified UFO program through a National Reconnaissance Office (NRO) document shared with him at a confidential April 10, 1997 meeting with Dr. Steven Greer, Dr. Edgar Mitchell, and Navy Commander Willard Miller.

The recently released transcript describes what Admiral Wilson [TW] told Dr. Davis [EWD] about Wilson’s efforts up to June 1997 to learn the truth about the classified UFO program, and the associated reverse engineering effort revealed to him in the April meeting.

EWD: Okay then, what happened in April-June ’97?

TW: After parting with Miller (week later, he thinks) – I made calls, knocked on a few doors, talked to people – went on for 45 days (thereabouts) on and off

Wilson was here referring to different categories of Special Access Programs (SAPs), where the most important – unacknowledged/carve-outs/waived – were hidden behind conventional SAPs.

The method of hiding the most highly classified programs behind less classified ones was verified in one of the NSA documents leaked by Edward Snowden called Sentry Eagle. It graphically depicted how Exceptionally Compartmented Information (ECI – an Intelligence Community classification similar to an Unacknowledged SAP used by the Pentagon) would be hidden behind a Non-ECI Program (similar classification status to a conventional SAP) Wilson went on to describe the aerospace company that ran the classified reverse engineering effort, without naming it:

EWD: Who was the project contractor or USG agency that runs the program?

TW: An aerospace technology contractor – one of the top ones in US

TW: Yes, the best one of them.

The reference to the “best one of them” firmly points to Lockheed Martin’s Skunkworks division which has a long track record of successfully working on cutting edge aerospace programs. For example, Skunkworks former Director, Ben Rich, was fond of ending lectures by declaring: “We now have the technology to take ET home”. Wilson then explained what happened when he discovered which company was running the classified UFO program and contacted it to gain access:

EWD: What happened with you found contractor?

TW: I made several calls (end of May ’97), first to Paul, Mike & Perry to confirm I had right contractor and program manager to talk to.

TW: (End of May ’97) Made three calls to the program manager – one of them conference call with security director and corporate attorney.

Confusion on their part at to why I was looking for them and what I wanted from them or wanted to know about.

Very testy tone from all of them. [Transcript/Summary, pp. 8-9]

Wilson next explains how he was denied access to the classified UFO program by the three corporate officials (program manager, security director, and attorney):

TW: They needed to discuss this (his demand) so hung up. Got called 2 days later and they said they don’t want to talk on phone and arranged for face-to-face meeting at their facility.

TW: Yes, ten days later (mid-June or so). Flew out there

EWD: 3 guys with whom you had telecon?

Wilson describes how the “watch committee” told him about a prior incident years ago where the present security system was set up after an agreement was reached with the Pentagon’s Special Access Programs Oversight Committee (SAPOC), which was overhauled in 1994, very likely due to the incident Wilson was told about. The agreement gave the corporate contractor running certain categories of SAPs the authority to restrict access to UFO related programs from Pentagon officials regardless of their rank and position:

–      Special criteria were established in agreement

The “watch committee” told Admiral Wilson that despite him being Deputy Director of the DIA and Vice Director of Intelligence for the Joint Chiefs of Staff, that he was not on the “bigot list” – those with a “need to know” access – who could be briefed about the UFO program:

TW: They said my tickets were all confirmed and valid, but I was not on the bigot list

TW: Argued more – they wouldn’t accept my arguments that they fell under my statutory oversight and regulatory authority as Deputy Director DIA – under purview for my right to have need to know (oversight, audit, justification issues, etc., etc.)

The transcription goes on to cover Wilson and Davis’ conversation about names on the bigot list, and who in the Pentagon and White House was allowed access:

EWD: Who was on it? Recognize names?

TW: That is core secret.

Willing to say that most were program employees – names and titles (job titles) – civilians – didn’t recognize any military personnel – could be there.

EDW: Any in Clinton or Bush Sr. Administrations?

TW: No! But handful of names were Pentagon individuals I recognized – few from OUSDAT, one from another department, another at the NSC who is Pentagon SES employee. [Transcript/Summary, p. 12]

Stunningly, Wilson learned that no members of the Legislative (Congress) or Executive (White House) branches of government were briefed about the corporate UFO program. Only a few Pentagon officials were given access. This corroborates what Greer and others have been claiming for decades over the unconstitutional nature of the secrecy system developed for the UFO issue.

Next, the transcript elaborates on how Wilson tried to gain access by identifying the type of program that was underway attempting to link it to his official field of responsibility as Deputy Director DIA:

– [TW] Program Manager said they were

Finally, Wilson was told that the UFO program was a reverse engineering program of a recovered extraterrestrial vehicle, exactly what Greer, Mitchell, and Miller, had told him at the April 10, 1997 meeting. Importantly, Wilson expressed his surprise thinking that the UFO term was merely a cover for acquired foreign aerospace technology built by the USSR or China:

TW: There were a reverse engineering program –

Wilson next described that he was told the corporation had encountered great difficulty in its reverse engineering efforts:

The refusal to grant access was the critical moment that Wilson realized that the corporation was being supported by a powerful group linked to the Pentagon to hide the corporation’s reverse engineering of an extraterrestrial spacecraft, as an Unacknowledged/waived SAP, hidden within the labyrinth of conventional SAPs conducted by the Pentagon and its corporate contractors.

The refusal was ultimately why Wilson believed that a UFO cabal/ MJ-12 was in charge of UFO related projects, and even senior officials at the DIA and the Joint Chiefs of Staff were out of the loop. This is what he told Commander Miller back in June 1997, who in turn relayed Wilson’s conclusions to Steven Greer and Edgar Mitchell who respectively revealed more details over the next two decades.