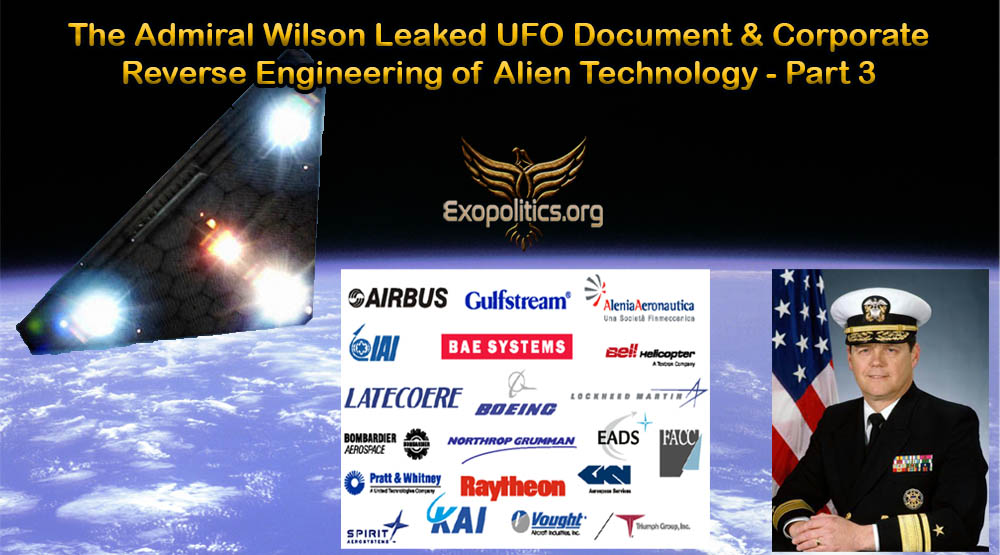 Written by Dr Michael Salla on June 18, 2019. Posted in Featured, science and technology

There are several important conclusions from Admiral Thomas Wilson’s failed efforts to learn about and gain access to a classified UFO program that involved a clandestine corporate effort to reverse engineering a retrieved extraterrestrial spacecraft as described in the leaked 15 page document received by Canadian UFO research Grant Cameron in November 2018, and uploaded to the internet on April 19, 2019.

First, Wilson’s failure to gain access to the classified UFO program described in parts one & two of this series confirms one of Dr. Steven Greer’s major contentions that senior military officials are out of the loop when it comes to UFOs, despite the obvious national security implications they carry. The “bigot list” mentioned by Wilson in his conversation with Dr. Eric Davis about who was granted “need to know” access to the program, was dominated by corporate employees, with only a few Pentagon officials being briefed, and no one from the Executive and Legislative branches of government.

This is very surprising given the clear national security implications about UFOs due to the advanced technologies they possess, and the possibility that these could be or had been weaponized by foreign nations. A few years later this was the rationale for the creation of the Advanced Aerospace Threat Identification Program (AATIP) in 2007 with Congressional funding of $22 milliion. Significantly, some of the principal figures involved in the Wilson UFO briefing, e.g., Dr. Eric Davis, were also involved in the AATIP program.

A second conclusion is that corporations have been given an inordinate amount of power when it comes to deciding who gains access to the category of unacknowledged/waived SAPs that involved the study of retrieved extraterrestrial technologies. The corporate “watch committee” described in part two, bluntly turned down Wilson’s request for access.

What really surprised Admiral Wilson, however, was that the Pentagon’s Senior Review Group running the Special Access Program Oversight Committee (SAPOC) also turned his request for access down, despite him being DIA Deputy Director, and Vice Director for Intelligence (V-J2) for the Joint Chiefs of Staff. All this is very telling about the power of corporations when it comes to who is really in charge of the research and development of extraterrestrial related technologies.

Another conclusion is that Wilson’s testimony provides powerful support for the existence of a UFO cabal/control group running extraterrestrial related projects in a way that escapes conventional government and military oversight. Leaked documents going back to September 1947 have referred to this control group as Operation Majestic 12/MAJIC 12/MJ-12.

Admiral Wilson’s experiences is telling us that the UFO control group is very real and exercises great power through its ability to restrict “need to know” access to whom it chooses regardless of an official’s constitutionally backed duties and positions. While it has long been known that US presidents and members of Congress were routinely cut out of the loop of such UFO related projects, it is was not known that this was occurring to senior Pentagon officials until the 1997 Wilson briefing.

Fourth, who leaked the 15 page document to UFO researcher Grant Cameron in November 2018? Was it one or more “white hats” wanting the disclosure process to move forward by leaking one of the most important UFO documents ever to publicly emerge as contended by UFO historian Richard Dolan describing it as the “UFO leak of the century”? Alternatively, was the leaking part of a limited hangout promoting Tom DeLonge’s To The Stars Academy through the involvement of figures such as Dr. Eric Davis as contended by Kerry Cassidy from Project Camelot?

Dolan addressed these questions in a blog post (insert video) published on June 15. He pointed out that Cameron’s source for the document is an Australian space/UFO enthusiast, James Rigney. In a Q and A with Dolan, Rigby wrote:

It is unlikely that these documents would ever have found their way to anyone within the UFO community were in not that for the fact that for number of years I was very active in the ‘Space’ community, belonging to an organization in Australia and making frequent trips to the US to attend conferences and other events. Along the way I was fortunate to make acquaintance in the US with several people in the US who knew of my interest in, knowledge of, and credible approach to the UFO/UAP phenomena, as well as my passive and occasional involvement in the UFO community.

The events that lead me to obtaining the documents were strangely the result of this strange and unlikely intersection between the usually incompatible Space & UFO fields….

Over a period of a couple of years, I gained [the] trust of these people to a point where I was invited to look over some documents, copy what I wanted, and get them into the right hands if I thought that was appropriate. Certainly there was no intrigue or ‘smoking gun’ type discussions at the time.

Digby was here confirming that the document’s original source was an individual connected to the US Space community who provided the document to him a few years ago. There is growing speculation that the leaked 15 page document came from the files of the deceased Apollo astronaut Edgar Mitchell. If so, who gave the document to Mitchell? The most likely source is Dr. Davis given his direct role in recording/summarizing the meeting with Admiral Wilson, but as mentioned in part 1, Davis had no comment on the 15 page document when I contacted him by email.

Tracking the ultimate source for the leaked document is very relevant given present circumstances surrounding topics concerning space and UFOs. The fact that the 15 page document was publicly uploaded on April 19 is significant given recent public interest over Navy pilots reporting UFO incidents, and the creation of a Space Force, as a new branch of the US military, which takes me to my last conclusion.

Finally, the three corporate officials in the “watch committee” that denied access to the classified program, claimed that the reverse engineering of the extraterrestrial vehicle was very slow, and little progress had been made over the years. Were they telling the truth or providing a cover story for successfully reverse engineered extraterrestrial technologies, which had been covertly deployed in a corporate run secret space program that was kept away from the prying eyes of the DIA and Joint Chiefs of Staff? In the US Air Force Secret Space Program, I describe how differently sized and shaped antigravity vehicles were successfully reverse engineered by corporate contractors, including Lockheed Martin’s Skunkworks division, and began to be deployed in the 1970s and 1980s by the USAF. This suggests that there are many Unacknowledged SAPs that involve the research, development, and deployment of antigravity spacecraft by different military services and corporate contractors.

There is no indication in the leaked 15-page document over whether Admiral Wilson was aware of secret space programs runs by the USAF and the US Navy. He merely expressed his surprise that the UFO program that Steven Greer and Edgar Mitchell pointed out to him, which he was unaware of, involved a retrieved extraterrestrial spacecraft.

It’s quite possible that Wilson was aware of military-run space programs but simply had not been briefed about the specific reverse engineering program that was being run by the corporate contractor for unknown purposes, one of which involved a corporate run secret space program.

It’s perhaps not coincidental that the leaked transcript and summary of Admiral Wilson and Dr. Davis 2002 conversation emerges as Space Force is about to be formally launched. The US Congress is poised to pass legislation authorizing the creation of Space Force as a separate branch of the US military under the authority of the Department of the US Air Force.

The emergence of Space Force will ultimately address many of the questions and issues raised by Admiral Wilson’s investigation of the corporate reverse engineering program back in 1997, and the secret construction of antigravity spacecraft by multiple corporate contractors for the US military or other unknown customers.

Space Force will also provide a powerful institutional foundation for disclosing many secrets concerning antigravity technology, alien life, the reverse engineering of extraterrestrial technologies, and secret space programs. The leak of the Wilson Davis conversation comes at a propitious time for the disclosure process to move forward, and Space Force is the most likely institutional catalyst for all to be revealed.