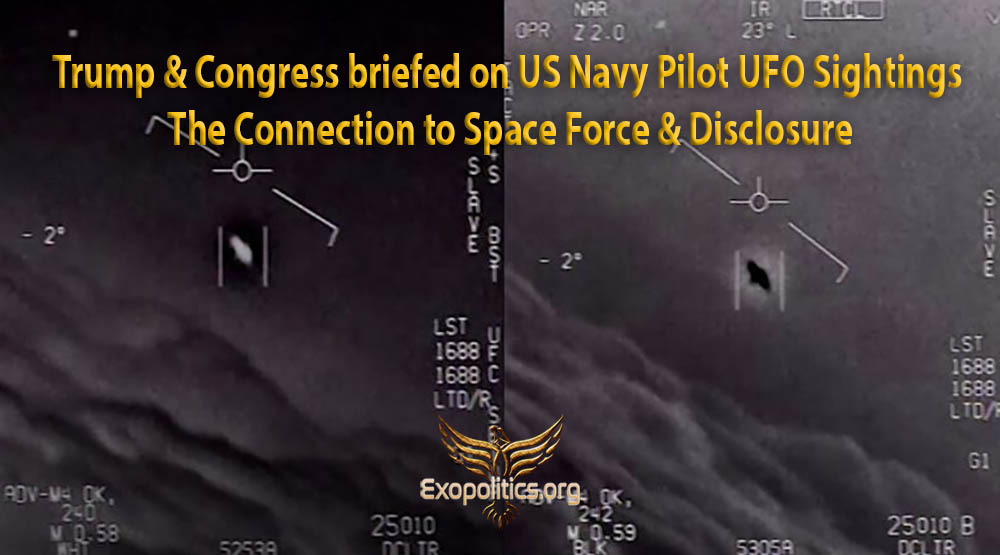 President Trump and members of the US Congress have recently received briefings about US Navy pilot sightings of UFOs. When combined with the Pentagon acknowledging that it had created a classified program to study the UFOs from 2007 to 2012 with Congressional funding, the briefings are leading to increasing speculation on whether we are on the verge of official disclosure on UFOs and their true origin.

Furthermore, the briefings are occurring at the same time as legislation for the creation of a Space Force is making steady progress through Congress. This raises the intriguing question of whether Trump and members of Congress have been told Space Force is necessary to deal with UFOs being sighted by the Navy pilots which are being viewed by the Pentagon as a potential threat.

In an interview with ABC TV host, George Stephanopoulos, President Donald Trump admitted that he received a briefing about UFO sightings by US Navy pilots that occurred in 2004 and 2015. In a June 15 story titled: “Trump briefed on Navy UFO sightings,” Politico’s Matthew Choi wrote about what Trump told Stephanopoulos:

“I want them to think whatever they think,” Trump said of the Navy pilots. “I did have one very brief meeting on it. But people are saying they’re seeing UFOs. Do I believe it? Not particularly.”

Trump was here acknowledging that he doesn’t believe in UFOs, which has the connotation of being an extraterrestrial piloted spacecraft. Reading between the lines here, Trump is hinting that what the Navy pilots saw were not UFOs but something else that he and the Pentagon knew the answer to.

When asked the question of whether he knew of an extraterrestrial connection to the sightings, he told Stephanopoulos:

“I think our great pilots would know. And some of them see things a little bit different from the past. … We’re watching, and you’ll be the first to know.”

Trump appeared to be deflecting from what he really knew about the alien connection, but one thing he emphasized was that his administration is paying attention to what the Navy pilots have been reporting. Again, reading between the lines, Trump is saying that his administration is actively seeking answers to the UFO phenomenon, and when he finds out, he will relay this to Stephanopoulos and the general public.

A few days later on June 19, Politico ran a story where it discussed three US Senators that had also received classified briefings on the UFO sightings by Navy pilots. In “Senators briefed on Navy UFO sightings”, Bryan Bender wrote:

Three more U.S. senators received a classified Pentagon briefing on Wednesday about a series of reported encounters by the Navy with unidentified aircraft, according to congressional and military officials — part of a growing number of requests from members of key oversight committees.

One of them was Sen. Mark Warner (D-Va.), the vice chairman of the Senate Intelligence Committee, whose office confirmed the briefing to POLITICO.

“If naval pilots are running into unexplained interference in the air, that’s a safety concern Senator Warner believes we need to get to the bottom of,” his spokesperson, Rachel Cohen, said in a statement.

Justifying their interest in the Navy pilot sightings as a “safety concern” is a convenient way for members of Congress to take an active interest in UFO reports, which have been officially dismissed and ridiculed for decades. This official policy goes back to 1953 when a CIA sponsored panel of scientists gave a damming report on UFO sightings that recommended a public education program to dismiss and ridicule UFO (aka flying saucer) sightings on national security grounds.

Ever since then UFO sightings have been reported by the mainstream press in a way that often mocks and ridicules the subject matter. What is very unusual today is that serving Navy pilots are given permission to talk about their sightings, and the press is giving their accounts serious attention in articles without any ridicule factor.

This is amply demonstrated in the many mainstream news stories that appeared after the New York Times and Politico ran simultaneous articles about the Navy pilot UFO sightings back on December 16, 2017. Both newspapers discussed the pilots’ UFO sightings, leaked videos of the UFOs recorded by their planes instruments, and the connection of the sightings to the establishment of the Advanced Aerospace Threat Identification Program (AATIP) back in 2007 with Congressional funding of $22 million.

All this coincides with the formation of Space Force as a sixth branch of the US military, which is currently being debated by both houses of Congress. In the last few weeks, two Congressional defense committees have approved the passage of bills authorizing the creation of Space Force. It will take another month or two for both the House of Representatives and Senate to pass their respective bills, and to then resolve differences in language and priorities between the two versions for their inclusion into the National Defense Authorization Act for 2020.

One thing is becoming very clear, Space Force enjoys genuine bipartisan support in Congress, and this appears to be a result of the current media and Congressional interest in UFOs generated by Navy pilot reports and Pentagon disclosures about its AATIP program. Was Senator Warner, a Democrat, told by his Pentagon briefers that the UFOs sighted by the pilots were an unknown threat, and this is why Space Force is necessary?

A few weeks earlier, Senator Ted Cruz spoke about Space Force being necessary to deal with space pirates. He was not talking about extraterrestrial visitors, but rogue elements from different countries or corporations that could challenge US supremacy in space.

It’s not coincidental that members of Congress are being briefed about Navy pilot reports of UFOs that led to the Pentagon setting up its AATIP program in 2007. They are being told that UFOs are an unknown threat, at the same time as the Trump Administration and the Pentagon are pushing for the establishment of Space Force. It’s widely expected that Space Force will be officially created and set up under the Department of Air Force in 2020, mirroring the relationship between the Department of the Navy and the US Marine Corps. After its official launch, the stage will be set for the Air Force to unveil the classified space technologies it has been covertly developing for decades in a secret space program, which is described in detail in my newly released book, US Air Force Secret Space Program: Extraterrestrial Alliances and Space Force.

Official disclosure is likely to unfold in different stages. The first will be that many UFO sightings involve classified technologies developed by the USAF, along with similar aerospace technologies developed by Russia and China. Disclosure of an Air Force secret space program will be an optimal way of surprising the US public with news about the different sized and shaped antigravity vehicles that have been deployed for several decades now.

The second stage of disclosure likely involves future announcements involving the capture and reverse engineering of non-terrestrial technologies that date back to the 1940s, as also described in the US Air Force Secret Space Program.

A sure sign of what lies ahead is a leaked document about Vice Admiral Tom Wilson, former Director of the Defense Intelligence Agency, being denied access back in 1997 to a classified corporate program involving the reverse engineering of non-human made advanced technologies.

The leaked document identifies several scientists and former military officials who could be summoned before Congress to testify about their knowledge of such a reverse engineering program. Indeed the Pentagon official in charge of the AATIP program from 2007 to 2017, Luis Elizondo, gave an interview on Tucker Carlson on May 31 admitting that some UFO technologies had been retrieved and were being studied by the US government.

Elizondo: I do. Yes.

Carlson: Do you think the US government has debris from a UFO in its possession right now?

Elizondo: Unfortunately Tucker I really have to be careful of my NDA [Non-Disclosure Agreement], I really can’t go into a lot of more detail than that …

This would set in place a means by which the Pentagon and the Trump Administration could reveal how retrieved non-terrestrial technologies were used for the USAF for the research and development of advanced aerospace technologies using antigravity, torsion field and other exotic propulsion systems.

Finally, after Space Force has been created and its arsenal of antigravity spacecraft inherited from the USAF is publicly revealed, the truth about some of the extraterrestrials currently visiting our world can be announced. Extraterrestrial disclosure can be done in a way that does not undermine public confidence over the US and other national governments being able to defend their populations against any possible hostile extraterrestrial actions.

The widespread media attention given to US Navy pilot reports, the association of the UFOs with the AATIP program, and Congressional passage of legislation establishing Space Force are all sure signs of major disclosures that lie ahead.