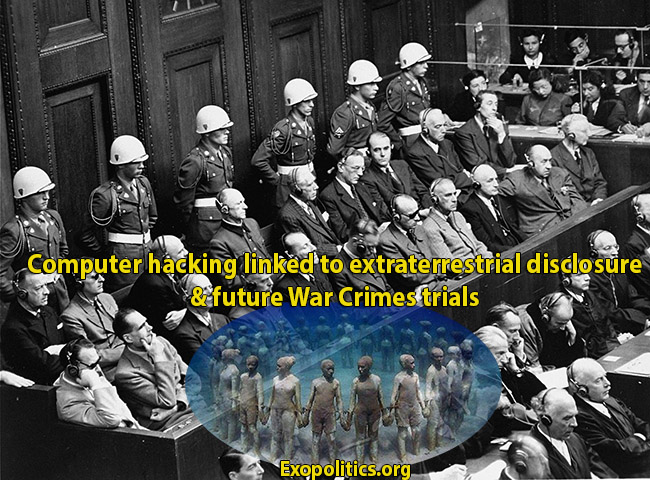 The mystery of who hacked into U.S. Federal government personnel files is over according to a whistleblower who claims to have worked on classified space programs. The hacking was done to gather data for future war crime trials once the truth about secret space programs and extraterrestrial life is disclosed to the world.

On June 4, it was announced that up to four million US Federal government employees had their personnel files hacked by an unknown source. Days later, it was announced that the hacking had been more extensive involving up to 14 million personnel files going back to the 1980s.  The hacking incidents involved extensive information about the backgrounds of individuals gained in security reviews for classification clearances.

The hacking incidents involved the Office of Personnel Management (OPM) which contains the security files of individuals that have applied for security clearances either to work for the U.S. federal government, the U.S. military, and even included personnel from corporations fulfilling government/military contracts:

In an announcement, OPM said that investigators concluded this week with “a high degree of confidence” that the agency’s systems containing information related to the background investigations of “current, former and prospective” federal employees, and others for whom a background check was conducted, were breached.

The Washington Post gave a description of the type of information gained in the hacking incident:

Corey Goode responded to a question about the hacking incident in a report he gave about three meetings he attended from June 5-9 involving disclosure of secret space programs:

In your report of the June 5 meeting you say that the “Earth Based Alliance” has accumulated a lot of personal data of individuals for future war crimes trials through hacking of “Western Government Personnel Databases.” Can you elaborate on who comprises the Earth Based Alliance, and whether the June 4 announcement that 4 million federal workers files were hacked in Dec 2014 is part of this Earth Alliance operation?

This information came from a series of hacks and inside operations. It was stated that most of the information was fresh intelligence that had just been obtained. It was that same day after the meetings that I heard about some massive hacking breaches in the U.S. during the time frame you mentioned. I’m certain that was a part of the data they had obtained but I also have the feeling there was much more that they had gotten a hold of more recently from both the U.S. and the E.U.

In earlier public releases, Goode has described how there have been extensive crimes committed by those participating in a “galactic slave trade.” In response to a question about who was behind the extensive human trafficking conducted in the secret space programs, he said:

This is some pretty horrific and controversial information. It starts out with in some cases with your run of the mill organized crime groups who are into the sex and slave trade which is very much alive in the 20th and 21st centuries. Many of these crime groups or gangs have specialists who work from lists of desired people to be obtained (many others are victims of opportunity). These specialists often are kind elderly looking people or professional people (including Medical, Law Enforcement and Education to name a few) that no one would consider a threat, come in contact with a lot of people and are generally trusted. These people operate in just about any country you can think of. Often people are grabbed who live on the streets, in third world countries (that they can though their power around in) or from inattentive parents. This level of human trafficking brings in many hundreds of thousands of people per year into the slave trade. These people do not know or care what happens to the people they obtain and hand off to handlers in exchange for money.

Goode says that there have been a number of defectors from a secret space program called the Interplanetary Corporate Conglomerate (ICC) that has been directly linked to the galactic human slave trade and the use of slave labor at its secret bases on Mars and elsewhere in the solar system, These defectors have been revealing what they know about this abuse and will testify at upcoming war crimes trials. It’s important to emphasize here that the files of senior personnel working in the ICC are likely part of the database of information gained through the hacking incident announcement on June 4.

Goode describes how information obtained by hacking into the personnel files of government workers is part of the future War Crimes trials that will be conducted as a result of the testimonies of defectors:

This was an unusual meeting because of the types of people that were present. There was a presentation of the information provided to the Alliance Council by the Defectors and what they would testify to. The “Earth Based Alliance” then presented a large amount of information that they had just obtained through hacking and espionage from western governments (U.S. and E.U.). Once this presentation was over and the “Earth Based Alliance” and the “Defectors/Witnesses” were escorted to their next part in their activities.

Most speculation centered on China as the culprit for the hacking incidents seeking information that will help it conduct future espionage against the US. Not so if Goode is correct. The real culprit is a “Secret Space Program Alliance Council” seeking data on personnel that will be used in future war crimes trials against those who committed crimes against humanity in secret space programs involving extraterrestrial life.

According to Goode we won’t have to wait long. He has revealed that the extent of disclosure is at this very moment being worked out behind the scenes by a wide array of secret space program alliances and extraterrestrial visitors. An offer was made for a “limited disclosure” to begin in November with only one high level official coming forward to take responsibility. The offer was declined, and plans proceed with a “full disclosure event” where all is revealed through information dumps and more whistleblower testimonies. If the June 4 hacking announcement is any guide, a future disclosure of secret space programs and extraterrestrial life will be quickly followed by Nuremberg-like trials for all government and corporate personnel linked to war crimes.