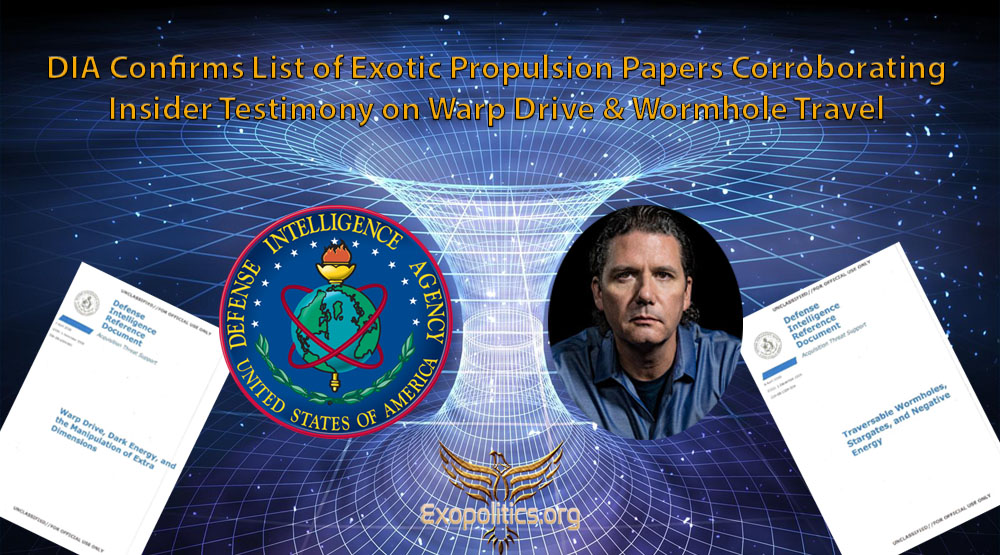 Written by Dr Michael Salla on January 22, 2019. Posted in Featured, science and technology

On January 16, 2019, the Defense Intelligence Agency (DIA) responded to a Freedom of Information Act (FOIA) request and confirmed that a list of 38 papers examining exotic propulsion technologies is genuine. The FOIA request was made from the anti-secrecy group the Federation of American Scientists (FAS), which filed it on August 15, 2018 and later issued a website update describing the documents received from the DIA.

in a January 17 announcement, Steven Aftergood, who wrote the original FOIA request to the DIA, described what the DIA had provided:

From 2007 to 2012, the DIA spent $22 million on the activity, formally known as the Advanced Aerospace Threat Identification Program… Yesterday, the DIA released a list of 38 research titles funded by the program, many of which are highly conjectural and well beyond the boundaries of current science, engineering — or military intelligence. One such title, “Traversable Wormholes, Stargates, and Negative Energy,” was prepared by Dr. Eric Davis, who has also written on “psychic teleportation.”

Aftergood’s original letter to the DIA had asked for information concerning “a copy of the list that was recently transmitted to Congress of all DIA products produced under the Advanced Aerospace Threat and Identification Program [AATIP] contract”.

The DIA released a document with five pages, which included a January 9, 2018 letter by the DIA to Senators John McCain and Jack Read, the Chair and Ranking Member of the Senate Armed Services Committee. In the letter the DIA provided a list of 38 reports in response to the requests of the respective staffs of Armed Service Committee leaders. The DIA letter stated:

There are 38 reports associated with DIA’s involvement on the program documented in the list. All are UNCLASSIFIED/ FOR OFFICIAL USE ONLY except for attachment 37 which is a SECRET/NOFORN version of attachment 38 State of the Art and Evolution of High Energy Laser Weapons.

The list of 38 reports was publicly leaked on July 25, 2018 by TV journalist George Knapp and his investigative unit, the I-Team, in a story covering Dr. Hal Puthoff’s description of studies funded by the AATIP titled “Exclusive: I-Team obtains some key documents related to Pentagon UFO study”:

In June, physicist Hal Puthoff made the first public presentation about the UFO study. He was the chief scientist for BAASS (Bigelow Aerospace Advanced Space Studies), the Las Vegas company which won a Pentagon contract to study UFOs and related mysteries.

In his presentation, Puthoff listed the subjects explored in dozens of scientific studies initiated by BAASS: Star Trek worthy topics — warp drive, invisibility, metamaterials but the titles and authors have not been released — until now. The list made public for the first time includes subjects such as worm holes, antigravity and how to track hypersonic vehicles, and more….Puthoff said his group has studied unknown materials recovered from crash sites.

So far three of the papers on the 38 documents list have been leaked to the public. The first two were leaked by Corey Goode who was given the papers by a Washington DC insider, apparently within the DIA, who said they would help him open up the public to the truth of his secret space program testimony.

Goode described being given a number of documents, two of which were from the list of 38 that the DIA officially disclosed. Goode was told: “This series of unclassified DIA documents are said to be used to slowly “read in” certain people in the DOD/DIA to Special Access Programs.” In his numerous interviews and articles, Goode has frequently referred to some of the advanced technologies described in the DIA papers, wormholes, warp drive, etc. The two papers leaked by Goode were therefore important corroboration for some of the exotic propulsion technologies he claimed had been actually developed by major defense contractors, and were in widespread use in secret space programs.

In an earlier article, I described how Dr. Eric Davis had confirmed the two papers leaked by Goode were authored by him. He was thoroughly puzzled over how they had been leaked into the public arena. The point Davis made was that only a genuine Washington DC insider could have had access to the documents and released them. Essentially, Davis was confirming that Goode’s DIA/Washington DC insider was authentic.

In addition, UFO activist Mike Waskosky has provided the first detailed account of Goode’s role in being the first to release the two DIA papers, and the response of different UFO researchers to this development given widespread disbelief among them over Goode’s credibility as a witness.

The DIA’s FOIA response now makes it official. The two papers first leaked by Goode are among the list of 38 that had been commissioned by the AATIP program in 2007, under its former name of Advanced Aerospace Weapon System Applications Program.  The DIA’s FOIA release has therefore provided important corroboration for a key aspect of Corey Goode’s testimony; that he was chosen as a conduit for information about secret space programs to be first revealed to the general public.

Goode’s possession and release of the first two of the 38 advanced propulsion studies goes a long way to establishing his bona fides as an insider with accurate information about multiple secret space programs.

As a DIA FOIA officer lamented in responding to Aftergood, the DIA anticipated further FOIA requests for all 38 Defense Intelligence Reference Documents. Not only will this add a further layer of corroboration for Goode’s DIA/Washington insider source, it will provide greater insight into the Warp Drive, traversable wormhole and other kinds of exotic technologies that he claims are being currently used in multiple secret space programs.