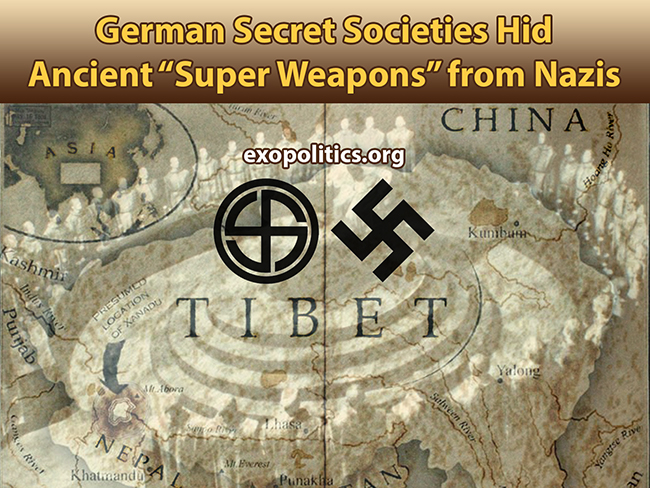 Adolf Hitler’s control over Nazi Germany was strictly limited when it came to developing super weapons from highly advanced technologies found by secret societies, which explored the world to locate and develop technologies that could easily have changed the course of the Second World War.

In the latest episode of Cosmic Disclosure, secret space program whistleblower, Corey Goode, describes more of what he read on “smart glass pads” containing classified information he was given access to during his 20 year service. He discloses extensive world-wide expeditions conducted by German secret societies to find advanced technologies built either by ancient human civilizations or by extraterrestrial visitors.

Goode claims that knowledge of these advanced technologies was concentrated in the Himalayan regions of India, China and Tibet. German secret societies, and later the Nazi SS, sent expeditions to these regions where they found ancient scrolls and books, and relocated these back to Germany along with some of the local monks and scribes who could interpret them.

These expeditions began immediately after the First World War, and peaked in the 1930’s when Hitler’s Nazi Party came to power, according to Goode. He describes the Thule, Vril and “Black Sun” as the main German secret societies involved in these expeditions.

While there is extensive literature about the role of the Thule Society in Hitler’s rise to power, there is less known about the Vril and “Black Sun” (German Schwarze Sonne) societies. The Thule Society was created on August 17, 1918, and the Vril Society formed soon after as an off-shoot. The latter was formed by female mediums who used their psychic skills for communication with ancient subterranean or extraterrestrial civilizations.

This leads to a fascinating conclusion. Himmler believed that the SS Black Sun society had successfully infiltrated the German secret societies, and would share  the secrets of the latter’s advanced space and technology programs underway in Antarctica and South America. This led to Himmler’s and Hitler’s firm belief that superweapons would eventually be developed and released in time to win the war. Instead, a decision had probably been made by the Thule, Vril and other secret societies to sacrifice Hitler’s Nazi regime, and the Black Sun did not pass on the technologies.

In the book, Insiders Reveal Secret Space Programs and Extraterrestrial Alliances, evidence is presented that the first antigravity space craft were built by the Vril Society with the support of wealthy Thule Society members, and later official Nazi support. Evidence is presented that Vril flying saucer prototypes were actually found in Germany and relocated to the U.S.

Contrary to conventional historical scholarship that Hitler was Nazi Germany’s absolute ruler, Goode paints a very different picture based on what he read on “smart glass pads”. Real power was concentrated in the hands of the German secret societies who decided what technologies would be released for the Nazi war effort.

As the Second World War unfolded with increasing Nazi defeats, Goode claims that the German secret societies were not interested in helping Hitler reverse the tide of the war:

I think that there were [some] technologies acquired and integrated into their breakaway secret space program that they were developing. But they were developing this for their own [purposes] when it came down to it, they didn’t care about [Germany winning] World War II, the motherland, [or] using this technology to defeat the United States and the enemies they were engaged in war with.

While Nazi Germany did pursue advanced weapons programs based on what Himmler’s SS had discovered, the most advanced technologies were kept from Hitler and taken to remote locations in South America and Antarctica.

In these remote locations, well away from the widespread destruction occurring in Europe, the German secret societies were free to develop a parallel technology program to that being desperately pursued by the Nazi SS. The secret societies built highly advanced space craft and weapons technologies, and kept these well away from Hitler’s knowledge or control.

From 1939, when the first Antarctica base was officially established by Nazi Germany, secret societies repatriated the most talented scientists to build a breakaway German faction. Goode describes three bases built at locations that had earlier been used by an ancient subterranean civilization that were helping the German secret societies. The building program continued throughout the war, and accelerated with the looming defeat of Nazi Germany.

When Admiral Byrd reached Antarctica in January 1947, he encountered the breakaway German secret societies, whose technologies were far more advanced than those possessed by Himmler’s SS, which had just been defeated. The U.S. Navy suffered a stunning defeat at the hands of the breakaway German faction.

There is solid historical evidence supporting Goode’s incredible claims. It is known that the Nazi SS had a research group called the Ahnenerbe (German for “inherited from the forefathers”) that did indeed conduct expeditions to Tibet, Peru and elsewhere in search of ancient knowledge and technologies. The Nazi SS Ahnenerbe could well have been the research umbrella for the German secret societies described by Goode. German Expedition to Tibet was a scientific expedition from May 1938 to August 1939, led by German zoologist and SS officer Ernst Schäfer.

Also, it is known that the Thule Society was the sponsor of the German Worker’s Party that was the predecessor to the Nazi Party. Thule Society beliefs about the development of morally, intellectually and physically superior human beings (German Ubermensch) were incorporated as key principles in the development of Nazi ideology. Thule elites chose Hitler to lead the nascent Nazi Party because they believed they could easily control him.

Conventional historians tell us that Hitler turned on his former sponsors, and took absolute power and banned secret societies. Instead, according to Goode, Hitler was never more than a puppet of the German secret societies who decided what information and advanced technologies they would release to him as he pursued his militaristic policies.

The most recent episode of Cosmic Disclosure adds more details about the advanced technologies found and developed by German secret societies that were earlier disclosed by Goode in a previous episode and an email interview. More historical evidence supporting Goode’s incredible claims can be found in Insiders Reveal Secret Space Programs and Extraterrestrial Alliances.

Goode’s disclosures lead to an astonishing conclusion. German secret societies exploited Hitler’s Nazi regime by persuading it to provide resources for building the technological infrastructure for a breakaway German space program in Antarctica and South America.

The German secret societies promised to share advanced technologies that would allow Hitler to conquer Europe. Instead, they deceived Hitler, and allowed the collapse of Nazi Germany.

Perhaps most disturbingly, Goode claims that the German secret societies ultimately joined forces with U.S. based secret societies, and proceeded to infiltrate the U.S. military industrial complex. The result has been the development of many advanced spacecraft under the control of German secret societies and their U.S. allies, which Goode refers to as the “Dark Fleet” – a secret space program based on Nazi principles drawn from the Thule Society.

In the last few years, according to Goode, other secret space programs have united to thwart and expose the historical activities of the Dark Fleet and its allies. As more disclosures take place, humanity will find itself informed about and eventually freed from long standing manipulation by secret societies using advanced technologies to limit human potential.