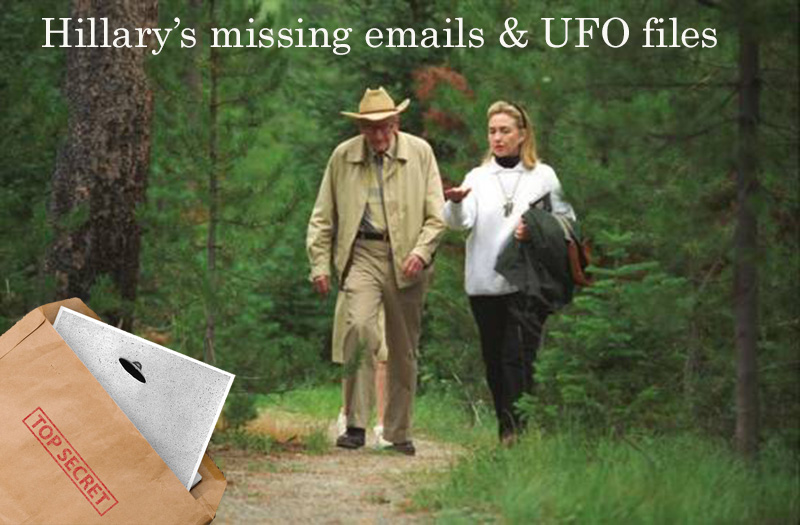 Written by Dr Michael Salla on March 12, 2015. Posted in exonews Hillary Clinton’s admission at a March 10 Press Conference that she used her private email account for official State Department business has created a firestorm of criticism. Republican critics are asking whether the missing emails have anything to do with the Benghazi incident involving the deaths of State Department personnel. Much of the mainstream media is speculating about the content of 31,830 ‘personal’ emails she claims to have destroyed since they did not involve State Department business. What is not being asked is whether the missing emails involved references to classified UFO files which Hillary had attempted, during the Clinton administration, to gain access to.

Back in August 1995 Hillary was given an informal briefing by billionaire philanthropist Laurence Rockefeller, on the best available UFO evidence. An August 4, 1995, memo by President Clinton’s Science Advisor, Dr Jack Gibbons, confirmed that the Clintons would be vacationing with Rockefeller at his Teton Ranch in Wyoming that summer, and they would discuss UFOs:

You will probably see Mr Rockefeller on your vacation in the Tetons. He will want to talk with you about his interest in extrasensory perception, paranormal phenomenon, and UFOs.

He knows that we are trying to be helpful in responding to his concerns about UFO’s and human potential … but I’ve made no secret about my conviction that we must not be too diverted from more earthly imperatives.

Grant Cameron, the Canadian UFO researcher responsible for requesting the release of the Clinton UFO files through FOIA, confirmed that Hillary Clinton was the Clinton administration’s point person for UFO discussions. He wrote: “Hillary time and again spoke of UFOs, UFO sightings, and the concept of the “alien invasion,” in her speeches, and in her statements to the press.”

It’s important to point out that one of the figures involved in the unsuccessful Clinton administration effort to gain access to classified UFO was John Podesta, who ultimately became Bill Clinton’s Chief of Staff. Podesta subsequently became co-chair of the Presidential transition team for the Obama administration in 2008/2009 – a position where he played a key role in the selection of White House staff.

More recently, John Podesta admitted that he was involved in a secretive attempt by the Obama White House in 2014 to gain access to classified UFO files from unknown government agencies. On his final day as Counselor to President Obama on Energy and the Environment, Podesta said:

… my biggest failure of 2014: Once again not securing the #disclosure of the UFO files.

Podesta’s admission raises three important issues. First. in 2014, a new White House effort to secure disclosure of classified UFO files had been attempted but ultimately failed. Second, there had been earlier unsuccessful efforts by Podesta to secure the release of such files spanning the years of the Clinton, Bush and Obama administrations. Finally, there is an unknown government and/or corporate entity with the power to deny sitting Presidents and their staffs access to classified UFO files.

On the topic of Hillary’s 38,830 missing emails, we know that Hillary has had a keen interest in classified UFO files, and was the key figure in the Clinton administration’s efforts to have them either declassified or made available to senior White House staff. We also know that the Obama administration was involved in one or more secretive efforts to have classified UFO files released.

As Obama’s first Secretary of State, an important question that arises is whether Clinton was involved in any way in a secretive effort to have classified UFO files made available to senior White House officials. Unfortunately, the mainstream media is not asking Hillary whether any of her missing emails involved references to classified UFO files and Obama administration efforts to gain access to them. Perhaps in the next two years as Hillary campaigns for President, along with Podesta  who moved from the Obama White House to assist her, she will be more forthcoming about her secretive efforts to gain access to classified UFO files.