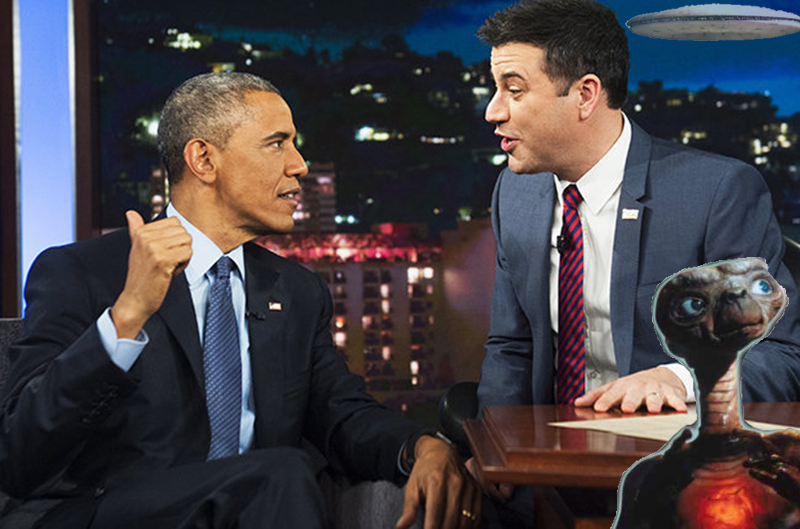 On last night’s Jimmy Kimmel Live, President Barack Obama made a strange UFO admission. He said space aliens control the USA, and they are responsible for government secrecy about UFOs. According to the LA Times and New York Magazine, Obama’s admission was nothing more than a joke made in a late night comedy show highlighting his dry sense of humor. But was it? A recent disclosure about UFO secrecy by John Podesta, Obama’s former White House Counselor for Climate Change and Energy Policy, suggests that Obama was serious about a situation he had no control over.

Here is what Obama said in response to Kimmel according to the LA Times:

[Kimmel] wanted to know whether Obama had tried to get to the bottom of the “UFO files” about the mysterious desert region known as Area 51.

“The aliens won’t let it happen,” Obama joked. “You’d reveal all their secrets. They exercise strict control over us.”

But President Clinton once said he’d checked on the matter and found nothing, Kimmel protested. “That’s what we’re instructed to say,” Obama responded.

Obama’s comments come only one month after Podesta claimed that his biggest failure for 2014 was: “Once again not securing the #disclosure of the UFO files.”

Podesta apparently received an informal briefing by UFO disclosure advocate Dr Steven Greer in Jan 2009 on alternative energy sources used by visiting extraterrestrial visitors. If true, it appears that when Podesta was appointed to be Obama’s senior adviser on energy policy in 2014, he attempted to pry loose classified information on the energy and propulsion systems of UFO craft.

Podesta’s frank admission of failure was interpreted as evidence that there exist  powerful government and/or corporate forces enforcing UFO secrecy. Obama’s comments raises another possibility. Space aliens themselves, at least some of them, play a key role in maintaining UFO secrecy.

The possibility that space aliens may be on Earth and are influencing the public policy of major nations such as the USA is not so strange given what other major world leaders have had to say on the topic.

For example, Russian Prime Minister Dmitry Medvedev said on Dec 7, 2012 that Russian Presidents are secretly briefed on extraterrestrials living among us and a top secret agency set up to monitor alien activities. Medvedev’s statement strongly implied that space aliens living among us exercise some kind of influence over human affairs.

According to Paul Hellyer, a former Canadian Defense Minister, the U.S. has reached agreements with extraterrestrials that secretly live on U.S. military facilities at Nellis Air Force Base. Hellyer claims to have confirmed his UFO alien information with senior military officials in the U.S. Air Force. Hellyer’s claims were cited in a story by the Fars News Agency that the U.S. is controlled by Tall White aliens. The story was covered by the Washington Post and other major media.

Obama’s strange alien control claim may have been done partly in jest on a late night comedy show. Yet that does not dismiss the possibility that underneath his dry humor was a disturbing truth. U.S. Presidents are powerless to tell the truth about UFOs and alien life – unless they do so in a way that maintains plausible deniability, like appearing on Jimmy Kimmel Live.