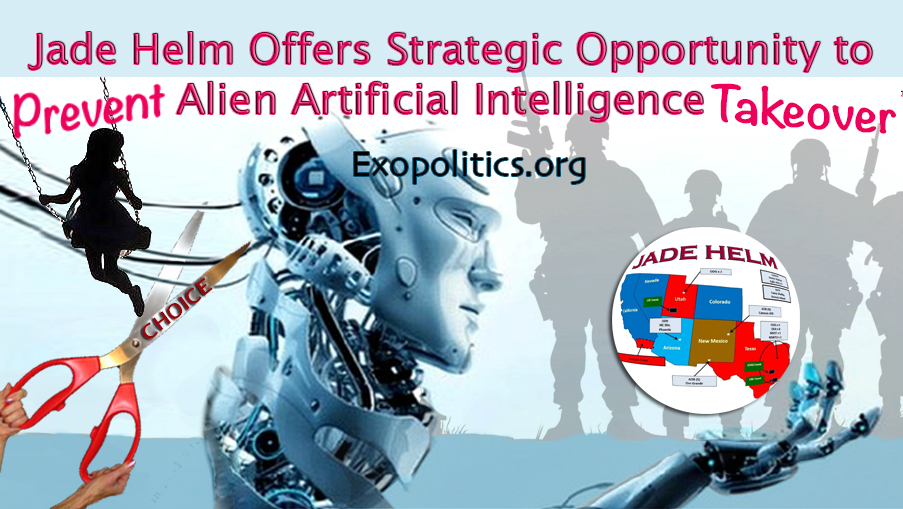 Written by Dr Michael Salla on July 4, 2015. Posted in science and technology The Jade Helm 15 military exercise scheduled to begin on July 15 has created much media controversy over whether it is some kind of military takeover or not. Some claim it is a nefarious military plan for disarming the patriot movement in an elite driven agenda to ultimately implement eugenics. Others say such fears are overblown and Jade Helm is similar to the many other U.S. military exercises that take place every year. There have been clashes, sackings and friendships destroyed depending on which side of the debate one supports. A newly released analysis of the Jade Helm exercise reveals both sides of the debate are right, but for the wrong reasons. The real existential threat Jade Helm poses, offers a strategic opportunity for the two factions of the debate to unite to prevent a future takeover of humanity by a threat that may have an alien origin.

It has been revealed that the Jade Helm military exercise uses Artificial Intelligence (AI) quantum computer technology to remove the human element from top-level control over battlefield decision making. According to a network/software engineer using the abbreviation, “DJ” Jade Helm is a test to see how successful AI is in anticipating civilian responses to military efforts to assert hegemony over a domestic battlefield scenario where civilians are in open revolt. If successful, Jade Helm will enable elite policy makers to eventually replace human generals and admirals with AI quantum computers programmed to master the ‘human domain’ which is defined as the “’physical, cultural and social environments’ that exist within a conflict.”

“JADE” is an AI quantum computing technology that produces holographic battlefield simulations that has the ability to use vast amounts of data being collected on the human domain to generate human terrain systems in geographic population centric locations to identify and eliminate targets, insurgents, rebels or whatever labels that can be flagged as targets on a Global Information Grid in Network Centric Warfare environments. In short, JADE HELM is not battles directed by Generals and Military Commanders, but by a computer. It is a cognitive software based Network Centric Warfare System at the HELM.

DJ’s analysis is a cause for great concern as expressed by a number of prominent scientists and inventors who have pointed out the existential threat posed by Artificial Intelligence. Elon Musk, Stephen Hawking and others point out that AI by its very nature will usurp human decision makers and eventually take over humanity. This could easily lead to humanity being eradicated. This is a scenario that DJ endorses in her analysis of A.I. and the existential threat it poses to humanity.

To reach her conclusion, DJ analyzed a number of industry and military papers describing various aspects of quantum computing and its application to battlefield scenarios. She has shared a number of research links for the public to independently confirm her findings.

Adding a deeper level of complexity to the analysis of Jade Helm 15 and the danger posed by AI are the claims of a whistleblower who says he has served with secret space programs that have security procedures in place to deal with AI as an existential threat.

According to Corey Goode (aka GoodETxSG), who also has a background in information technology, the space programs he has served with have identified an Alien “AI signal” as an existential threat. Goode describes elaborate security protocols that have been put in place to detect and eliminate the “AI signal” that not only has the ability to infiltrate advanced technology, but also biological systems.

The best way to avoid the dangers of AI is to educate yourself on the potentials they have to cause a loss of sovereignty. Becoming too dependent on technology is something else that will make you more of a target to be controlled by AI influence or even be infected by an “AI Signal” that can live in the bioelectric field of your body. This signal can then have an effect on the way you think and behave. This is something that is screened for even currently when operators and guests arrive at SSP [Secret Space Program] Facilities and is something that other ET Groups take seriously as well.

Goode says extraterrestrial civilizations have much experience in observing how AI has taken over countless other worlds, and led to the eradication of the indigenous population that created the AI. Essentially Goode is claiming that the storyline of the 2004 science fiction series Battlestar Galactica, is more science than fiction:

Those who are AI Prophets are already working on a timeline to create a society completely dependent on technology that at one point will hand its sovereignty over to this “AI God” because it will be believed that this AI is the only thing that can rule the world from a neutral perspective and bring world peace for the first time. These AI Prophets have been shown the information of the thousands of other civilizations that have fallen for this trickster god model and were all destroyed. DJ’s recent analyses of Jade Helm and role of AI is compelling as it presents a system/computer engineer’s analysis of the role quantum computers are playing not only for the military exercise, but for top-level human decision making to “master the human domain.” The final result could well be the take over and eradication of humanity as predicted by Musk, Hawking and others.

Not only does Jade Helm 15 open the door to AI taking over decision making in battlefield situations and mastering the human domain; but, if we include Goode’s disclosures, it will allow an alien AI signal to infiltrate human elites responsible for building quantum computing systems. There is evidence that the AI signal described by Goode has already infiltrated and taken over elite human groups proposing the development of artificial intelligence in more and more aspects of the “human domain.” Mark Zuckerberg, for example, recently said that he believes that AI is “”better than humans at our primary senses,” suggesting that AI is better than humans in processing and making decisions about the sensory data from our natural environment. J.D. says that the recent Bilderberg Group meeting in June had topics and information technology companies represented that suggested this elite global group was intent on promoting A.I. over the upcoming year to find new ways to “master the human domain.”

In a detailed explanation of Jade Helm and how it’s a roll out for an AI quantum computer battlefield simulation, J.D. provides a solution. She believes that in order for Jade Helm to succeed, it requires a realistic reaction to the battlefield scenario it is anticipating which is a public revolt to a hypothetical military takeover. In order for AI to successfully “master the human domain” in a future civil rebellion, it has to gain sufficient data to anticipate the human response to conditions that provoke a rebellion. J.D. claims that a massive psychological warfare operation is behind the roll out of the Jade Helm 15 exercise to stimulate public anger, fear and anxiety over it.

Protesting and taking civil action against Jade Helm is not the most strategic response according to J.D. In a May 16 video presentation, she claims that the best strategy is to “stop the data collection.” That’s why those arguing it’s best to ignore Jade Helm are half right. Not because there’s not something sinister behind the military exercise, but because the AI quantum computers being tested require a realist public response in terms of anger, fear and anxiety. This is precisely the data the AI computers need in order to learn how to eventually “master the human domain.” If Goode is correct, this has happened countless times on other worlds.

In conclusion, the more people mobilize in large scale public actions against the Jade Helm 15 exercise, the more likely the quantum computers succeed in their goal. A more strategic response is needed where individuals take action by denying AI quantum computers the data they need to learn how to “master the human domain.” Rather than take to the streets to protest Jade Helm 15, invite friends over for a barbeque, and take a look at the new Battlestar Galactica.