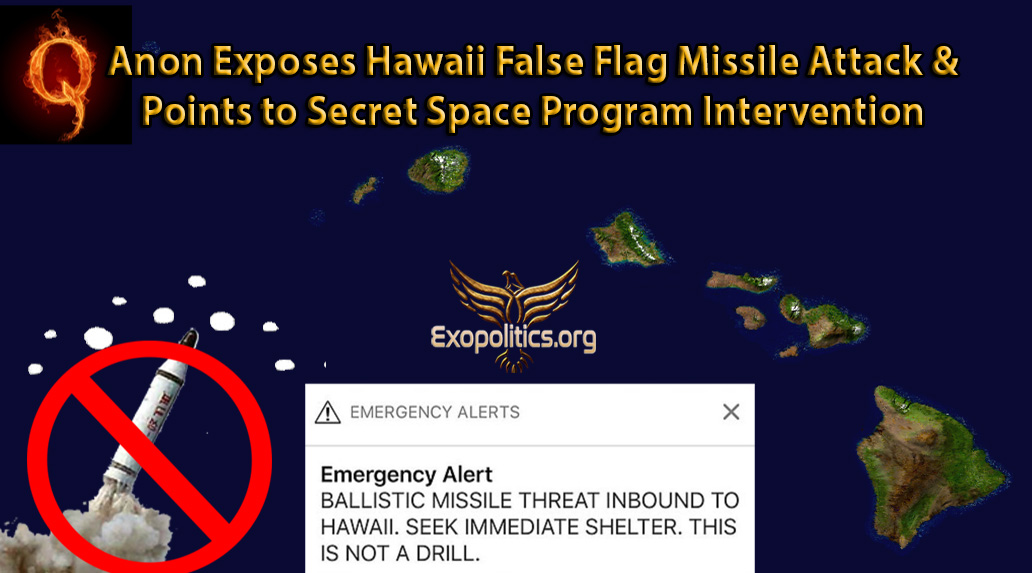 Today, QAnon returned to the topic of the January 13, 2018 ballistic missile alert for Hawaii being a false flag attack that was intended to bring about a major catastrophe for the Hawaiian islands. In once again raising the issue, QAnon emphasizes that supporters need to understand how the Deep State uses false flag events to promote its agenda, and how advanced technologies are being used by White Hats in the U.S. military to neutralize these threats.

Chief among these highly classified advanced technologies is a secret USAF space program that QAnon is alluding to as instrumental in stopping the Hawaii false flag attack. In short, QAnon wants supporters to learn that a USAF run secret space program intervened to prevent a nuclear catastrophe that had been attempted by the Deep State.

QAnon first pointed to the Hawaii missile alert as a false flag event in a February 11 post. I covered QAnon’s revelation in a detailed article released on February 13. In other articles, I pointed out the role of a secret CIA naval battlegroup in the false flag attack and the mounting evidence that such an attack involved a nuclear armed ballistic missile that was intended to hit Hawaii, most likely Honolulu.

Recently they [USAF secret space program] intervened in something that occurred in the planet. Most people don’t know that the CIA has a secret fleet that strangely enough they call the dark fleet. And it’s comprised of a nuclear submarine, a nuclear aircraft carrier, some prison ships, hospital ships, … destroyers, an entire fleet. And its kind of a rogue fleet.

And recently, I was told that, in a briefing, we haven’t fully confirmed all the details yet but these were retired general and colonel types speculating that the nuclear sub had gone into a shallow area close to North Korea and had fired an ICBM at Honolulu.

And of course, we all remember … it was all over the news … the fake missile alert.

But if you look deep in the news, you see some interesting UFOs reported close to Hawaii during that time period, weird corona in the sky. And also, someone reported an explosion in the sky, possibly a meteor…

So what I’m told that they believe happened, was that this rogue submarine fired a missile. The MIC [Military Industrial Complex aka USAF] Secret Space Program, took it out and intervened. And that’s what the explosion was that they heard over the ocean.

Goode’s information helps us better understand the involvement of secret space programs in global affairs, and their relevance in the ongoing civil war between the Trump Administration/U.S. Military Intelligence [QAnon] against the Deep State.

In this regard, Goode said:

Well, what’s interesting is this Military Industrial Complex [USAF] Program had been a major tool of the Cabal [Deep State] for a long time. But now, that’s kind of been wrestled away from them as the DoD types have come back more toward the direction of the Alliance. So it’s more of an Alliance representation in this program now, although … it is split a little bit.

In the August 30 post [#2003], QAnon refers to their earlier February post, where the Hawaii false flag attack is highlighted in a red box. Significantly, on August 30, [post #1993] QAnon added the following comments about why referring to the Hawaii incident again was important:

We believe in FULL TRANSPARENCY.

Hence the reason why we are here.

Hence the reason why THE PEOPLE are being updated.

Emphasis on (SOME) things.

The WORLD is connected. (SOME) things would irreparably harm our ability to advance.

QAnon clearly wants the rapidly growing Q movement to fully appreciate the significance of the January 13 Hawaii incident as a major false flag attack with a significance that needs to be fully understood. By referring to “FULL TRANSPARENCY”, “why THE PEOPLE are being updated”, and “Emphasis on (SOME) things” such as the Hawaii missile alert, QAnon is directing supporters to learn about who was behind the false flag attack and who stopped it.

It is becoming clearer that QAnon wants supporters to go down the rabbit hole of classified advanced technology programs, and how these programs are relevant in the shadow civil war between the Trump Administration/Military Intelligence and the Deep State.

QAnon is signaling that the defection of classified programs such as the USAF Secret Space Program from the Deep State augurs well for what lies ahead, and there is much cause for optimism that “full transparency” will be achieved so that the planet may change forever as these technologies are fully exposed.