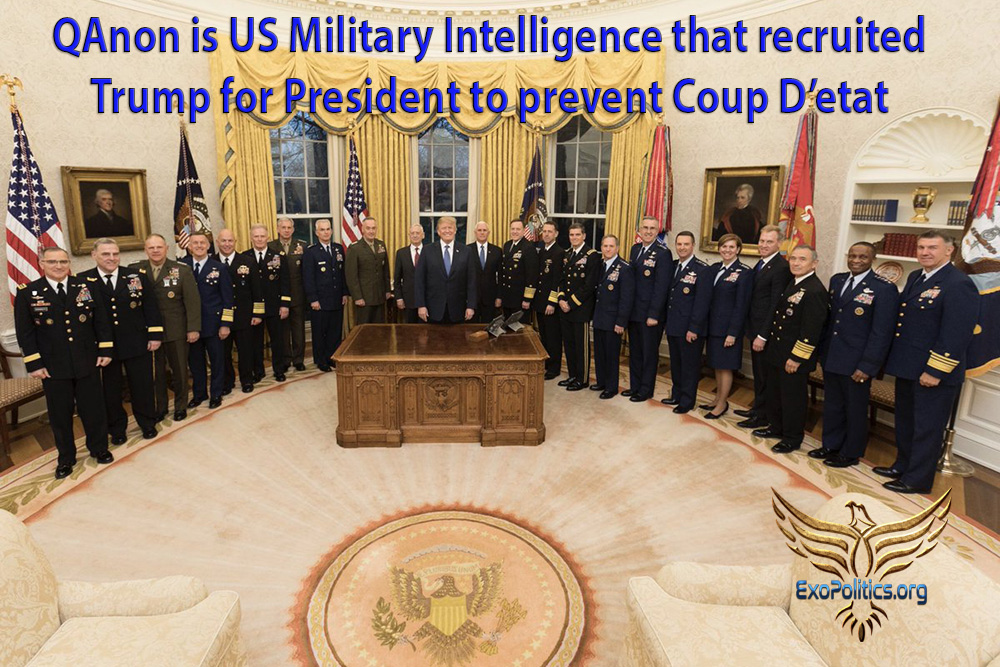 Written by Dr Michael Salla on April 12, 2018. Posted in Featured, US Politics

According to veteran investigative reporter and best selling author, Dr. Jerome Corsi, he was approached three years ago by a group of generals and told that Donald Trump had been recruited by U.S. military intelligence to run in the 2016 Presidential elections, and subsequently help remove corrupt Deep State officials from positions of power. Corsi claims that QAnon represents the same group of senior military intelligence officials who are exposing the Deep State corruption and officials involved in a history of treasonous actions against the U.S. Republic.

This is what Corsi said at a meeting on April 11, which also featured the founder of InfoWars.com, Alex Jones:

About three years ago a group of Generals came to me, and it was explained to me that they were ready to conduct a coup d’etat. They were ready to move Barack Obama from office with military force. And then a few weeks later I got another call and said they were reconsidering.

You know why they were reconsidering? [audience calls out answers] Because they talked to Donald Trump, and Trump had agreed he would run, and they agreed that if he would run, they would conduct their coup d’etat as a legitimate process, rooting out the traitors within government.  And that pact between the military and Donald Trump has held, as we have been interpreting and watching, and Alex has been following QAnon.

QAnon is military intelligence and close to Trump, and the intelligence we’ve getting, that we’ve explained on Infowars, really is a lot of the inside script.

It’s important to note that Corsi’s speech happened only a day after a tweet by President Trump featuring him with 20 senior U.S. military officials who dined with him the previous night: Only hours after Trump’s tweet, QAnon posted a message commenting about the photo’s significance: In the photo, the man next to Vice President Pence and Trump is Admiral Michael Rogers, the head of the National Security Agency. It was Rogers who travelled to Trump Tower on November 17, 2016, a week after the Presidential election, without the knowledge of his superiors in the Obama administration.

The next day, the Washington Post ran a story saying that senior Defense and Intelligence officials in the Obama administration were aghast at Roger’s action:

In a move apparently unprecedented for a military officer, Rogers, without notifying superiors, traveled to New York to meet with Trump on Thursday at Trump Tower. That caused consternation at senior levels of the administration, according to the officials, who spoke on the condition of anonymity to discuss internal personnel matters.

The Washington Post went on to report that a recommendation had been previously made to President Obama to remove Rogers in October 2016 by James Clapper (Director of National Intelligence) and Ashton Carter (Secretary of Defense). This coincided with a FISA court approving a request made by President Obama for his administration to spy on Trump’s campaign.

Given recent disclosures about FISA court orders approving the Obama administration spying on Trump, the timing suggests that Rogers had travelled to New York to warn Trump that the intelligence community were spying on him under the authority of a FISA court order. This is how one analyst explained the sequence of events:

NSA Director Admiral Mike Rogers didn’t want to participate in the spying scheme (Clapper, Brennan, Etc.), which was the baseline for President Obama’s post presidency efforts to undermine Donald Trump and keep Trump from digging into the Obama labyrinth underlying his remaining loyalists.  After the October spying operation went into effect, Rogers unknown loyalty was a risk to the Obama objective.  10 Days after the election Rogers travels to President-Elect Trump without notifying those who were involved in the intel scheme.

It would be fair to conclude that QAnon is acting with the approval or support of Admiral Rogers, and that intelligence data is being anonymously leaked to expose the extent of Deep State corruption.

Another interesting aspect of the photo tweeted by Trump showing him, Pence and Secretary of Defense, James Mattis, flanked by 20 uniformed military officers, is that 9 were on his right, and 11 on his left. Was this symbolism for the 911 event that is regarded by Corsi, Jones and many in the US Patriot community as a false flag event, orchestrated by corrupt Deep State officials that had manipulated both the Bush (43) and Obama administrations?

It’s worth examining Corsi’s claim that a group of generals were prepared to launch a military coup given the level of Deep State corruption and control prior to Trump choosing to run. Could this have been possible?

According to a November 2, 2017 post by QAnon, if Hillary Clinton had won the election or results were overturned in her favor, a military coup would indeed have occurred given her level of corruption:

As mentioned in my previous article, the Clintons’ corruption began with Bill’s term as Governor of the State of Arkansas, where he supported CIA drug running operations out of Mena, Arkansas. As investigative reporter Roger Morris discovered, there were many documents showing how the Clintons financially benefited, and even photos showing Bill using cocaine. This made it easy for the Deep State to manipulate Bill Clinton throughout his Presidency.

As Bill’s Presidency was coming to an end, Hillary’s rise to high political office was made possible, according to QAnon, by the CIA assassinating John F. Kennedy’s Jr., who was a threat to her plan to run for New York’s open US Senate seat in the November 2000 election.

If Clinton had indeed been helped in this sinister way by the Deep State, it is easy to understand how important she was to their future plans, and how deeply compromised she was.

These are only some of the “corrupt and dirty” events mentioned by QAnon, which the Clintons were deeply involved in, all of which facilitated Deep State power.

As to Corsi’s claim that military intelligence had recruited Trump to run and thereby prevent a Clinton victory through a rigged election, here is what QAnon had to say on the topic back on October 31, 2017: Corsi did not elaborate on the three generals that approached him in 2015, but it would be a fair to guess that Lt. General Michael Flynn was involved. As a former head of the Defense Intelligence Agency, Flynn would have been aware of the deep corruption underscoring the Clintons and the dirty tricks played by the CIA in support of the Deep State.

Flynn famously led chants of “lock her up” at the 2016 Republican convention when discussing Hillary Clinton.

Flynn’s appointment as Trump’s National Security Advisor, and quick departure less than a month later, appears to have been a major setback for the Military Intelligence community secretly backing the Trump administration. On October 28, 2017, QAnon first began releasing information on message boards. Presumably, this was done to enlist public support in exposing and taking action against corrupt public officials impeding Trump’s policies and the Military Intelligence community’s plans.

The level of information on Deep State control and corruption released by QAnon in over 1100 posts to date is astounding in its scope and impact.   A number of false flag events have been revealed, the most significant being a January 13, 2018 nuclear ballistic missile attack against Hawaii, which was intended to start a major regional war.

The knowledge that these revelations are coming from senior military intelligence officials working closely with the Trump Administration to overcome the corrupting power and influence of the Deep State is highly significant.

One can only guess what will happen if the military intelligence community succeeds in its plans to overcome the corruption and dirty tricks of the Deep State. While I don’t personally support many of Trump’s policies that have a right wing, pro-business, conservative agenda that guts many necessary welfare programs, I nevertheless recognize many positive benefits from dismantling the Deep State.

Exposing and removing corrupt Deep State officials will open the door to many life changing technologies that have been suppressed for decades, to finally be released to the public. It appears that this is what Trump was referring to during his Inauguration speech on January 20, 2017:

These technologies are so advanced that a Star Trek-like future is well within the reach of all of us. This merits keeping, at the very least, an open mind about the Trump administration, what Corsi was told about a possible coup d’etat and the 2016 election, and what QAnon is revealing to us.