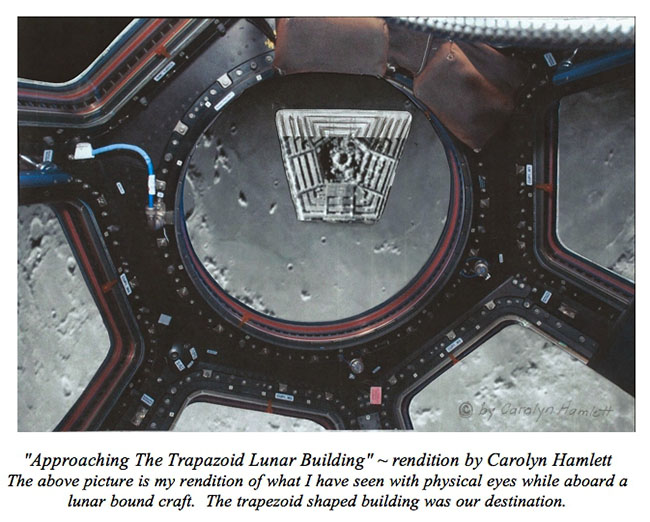 Written by Dr Michael Salla on May 23, 2015. Posted in exonews, Space Programs Secret space program whistleblower, Corey Goode revealed an astonishing fact about a secret base on the far side of the moon in his response to email questions published on May 20. He described the moon base as belonging to one of five secret space programs that he has earlier disclosed in email responses and public internet forums as the “Dark Fleet” which exploits humans in various ways. Since his email response a witness has emerged who claims to have traveled to the base in question and only partly recalls what happened inside. A second witness, identified in this article, has also traveled to a secret moon base, very likely the same Dark Fleet base, but fully recalls what happened.

I begin with the relevant Q and A with Corey published on May 20:

Q20. What can you tell us about the other shared human moon base used by the dark fleet?

It is a Heavily Guarded and Secret Base that is at about the 10 o’clock position, on the Back Side of the Moon. The portion that is visible is a “Trapezoid Shape”. It is only accessible to the Dark Fleet and some ICC Personnel as well as the Draco Allied Forces. Some amateur astronomers have caught video of swarms of craft leaving from this base location on a couple of occasions. It is presumed to go far beneath the surface of the Moon just as the LOC does.

A member of the public forum The One Truth alerted Corey to the claims of Carolyn Hamlett, who says that she witnessed a moon base that she was taken to. She recalled the shape of the base as being trapezoid and recreated it. Here is what she wrote about the recreation (see above).

The above picture is my creation from my memory.  I put the picture together to illustrate what I have seen with physical eyes while aboard a lunar bound craft with other humans.  The trapezoid shaped building was our destination. My first thought when I saw this structure was of its unique and significant shape, that of a de-capped pyramid and how much in architecture it reminded me of the Pentagon as seen in aerial photographs. Therefore, I chose a portion of an aerial photograph of the Pentagon to best illustrate the architecture of the actual building I saw on the moon. The rendition I have created is very much like the view I had as the craft I was in was making its approach.  However, the actual building on the lunar surface does not have an inner court yard.

Corey was surprised to see the recreation and wrote:

This is amazing! This is extremely similar to how the “Dark Fleet” base actually looks.

In an earlier post on the same forum, he said that very few had seen the base before, and little was known about what was occurring inside:

There is almost ZERO information on the lay out and details of that base. It is some information that would be very useful.

In an interview, Carolyn recalls being inside the spacecraft approaching the moon base she described in the above picture. She says that her memory then cut out in the craft, and she next recalled being inside the moonbase and witnessed a council type meeting with up to 30 global leaders from around the world led by a prominent female. She says that the base had been built in collaboration with Gray ETs who could not be trusted, and were manipulating the humans at the base by misleading them into believing they were in control. Carolyn does not fully recall what happened during the rest of her time inside the moon base. [See update notice below]

In his other email responses on May 20, Corey disclosed that he saw personnel on a secret Mars base that he believed were being used as slave labor. Also, he disclosed that remnants of a top secret Nazi Space program survived the Second World War and allied itself with an extraterrestrial race called Draco Reptilians. It is well known that Nazi Germany used slave labor for its secret technology programs. It’s more than likely that if a secret Nazi space program continued after the war and infiltrated the U.S. national security system as Corey claims, various off-planet bases used by the “Dark Fleet” and another secret space program called the Interplanetary Corporate Conglomerate (ICC) would also use human slave labor.

According to Corey, there is very little intelligence on what is happening inside of the moon base used by the Dark Fleet. In addition to Carolyn Hamlett’s testimony, there is a military abductee who claims to have been taken to a secret moon base where Gray ETs play a role, and recalls traumatic experiences happening to her.

Niara Terela Isley is a former US Air Force radar tracking operator who was forcibly recruited into a covert program when she witnessed a UFO while performing her official Air Force duties when she traveled with other USAF personnel to an assignment at the Tonopah Test Range in 1980. She and her  colleagues were instructed to attempt to get a radar lock on the glowing UFO, and were then taken into custody by a covert faction of the USAF. She was then exposed to a number of traumatic experiences in these military abductions (MILABs) that she describes at length in her book, Facing the Shadow, Embracing the Light (2013). She reveals that she was taken between eight and ten times to a secret moon base that was guarded by Reptilian beings and used human workers:

In interviews, people always want to know what my moon experiences were like and I can certainly understand such avid curiosity. I can only state that it was terrible on multiple levels. I was terrified for my life the whole time. I was very poorly fed and worked hard during the day cycle, operating some kind of electronic equipment for excavation at times, and doing hard physical manual labor at others, such as lifting and stacking boxes. Worst of all, I was used for sex during what passed for night there, from man to man. I was allowed very little sleep, and I’ve since learned that this is another facet of mind control abuse. I shut down during all of this to the point that I didn’t even feel alive anymore. (Facing the Shadow, Embracing the Light, p.271)

Niara’s description is testimonial evidence that slave labor is both used on the moon, and that MILABs are taken there for that purpose either for short periods, or for indefinite periods as occurs on Mars. While she did not describe the shape of the moon base she was taken to, her experiences with Reptilian guards and physical abuse along with other human workers suggests it is the Dark Fleet base that Corey has described. Furthermore, she described Gray extraterrestrials piloting the shuttle craft taking her to the Moon, which is consistent with what Carolyn Hamlett said about the Grays being involved in the base’s operations.

Corey’s revelation of an exploitative “Dark Fleet” base on the far side of the moon is now supported to varying degrees by two independent witnesses. Carolyn’s recollection of the base is that global leaders are taken there and manipulated by Gray extraterrestrials. Niara’s recollection is that Grays and Reptilians are involved with at least one moon base, and allow human workers to be mistreated. Niara’s testimony and the experiences of Carolyn Hamlett, when combined with Corey’s revelations about Secret Space programs, leads to a disturbing conclusion. There is at least one secret base on the far side of the moon that manipulates human leaders taken there, and use abducted humans as slave labor.

[Update 5/25 – In an earlier version of this article, I mistakenly wrote that Carolyn Hamlett had no memories of what occurred inside the moonbase and described her trip as an abduction experience. In fact, she had partial recall of an event she experienced there, and writes it was not an abduction experience as she clarified in an update on her blogsite. I have updated the above article accordingly, and apologize to Carolyn Hamlett for the errors.]