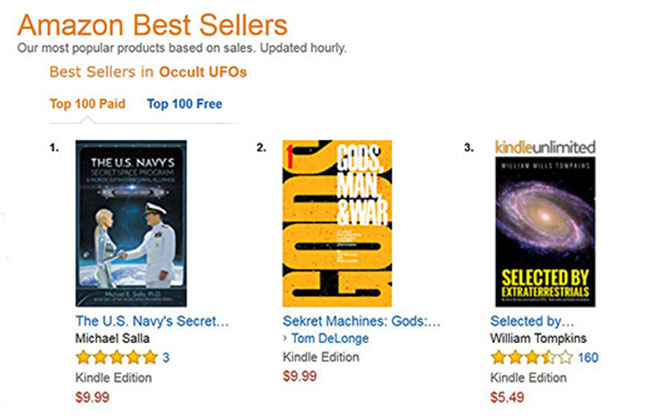 Written by admin on March 5, 2017. Posted in Featured, Space Programs

On March 5, three Secret Space Program books were at the top of the Amazon Best Seller lists for the UFO category. Two of the books, deal with a highly secretive program run by the US Navy, while the other deals with the US Air Force’s better known program run out of Area 51.

The current number 1 is The US Navy’s Secret Space Program and Nordic Extraterrestrial Alliance just released on March 1 that focuses on the testimony of retired aerospace engineer William Tompkins. The book uses extensive documentation to validate his claim of being directly involved in a US Navy espionage program with 29 Navy spies embedded in Nazi Germany’s top aerospace programs. He also revealed the existence of a Navy research study program at its premier China Lake facility to learn about antigravity technologies which were found after the February 1942 Los Angeles Air Raid.

Tompkins later worked with several aviation companies to help the Navy design and build massive space battle groups out of its highly classified facilities hidden under the Wasatch Mountains in Utah.The book examines the historic role played by a Nordic group of extraterrestrials in helping the development of antigravity technologies first in pre-war Germany, and later in the USA in a secret alliance with the Navy.

The number two listed Amazon book is authored by Tom DeLonge and Peter Levenda and is titled Sekret Machines: Volume 1 of Gods Man and War. It is the non-fiction companion of the 2016 fiction book, Sekret Machines: Chasing Shadows, which discussed a US Air Force run secret space program. It becomes available on March 7 and will focus on evidence of historical visitation by extraterrestrials or “Gods” provided to DeLonge by a team of 10 advisors drawn from the US military and aerospace corporations. The book’s Amazon description says: “Sekret Machines: GODS will take you on an eye-opening journey that transcends speculation and is based on unprecedented access to officials at the highest levels of government, military and industrial agencies who have provided insights and assistance never before experienced by any researchers in this controversial field.”

The number three top selling Amazon book is authored by William Tompkins, and edited by Dr. Robert Wood (who also wrote the Foreword to the above US Navy’s Secret Space Program book), and is titled Selected by Extraterrestrials: My life in the top secret world of UFOs, think-tanks and Nordic secretaries. It is the first volume of his autobiography where he reveals his involvement in the Navy’s espionage program and work with Douglas Aircraft Company and TRW to design antigravity spacecraft. Most remarkable is Tompkins’ claim of having worked with Nordic extraterrestrials secretly embedded in top aviation companies who covertly helped engineers and scientists achieve the technical know how to build large antigravity craft. Tompkins provides extensive documentation to support his amazing claims.

It is noteworthy that an additional two books about secret space programs (Insiders Reveal Secret Space Programs and The Ascension Mysteries) make the top six Amazon best seller list in the UFO category (see following March 5 screenshot). Both focus on the remarkable testimony of Corey Goode, and include other witnesses and whistleblowers disclosing their knowledge about these highly classified military and corporate run programs. The fact that three secret space program books currently top the Amazon best seller list for the UFO category is a testament to the rapidly growing interest among the general public for information about such programs. It’s very clear that people are embracing the evidence that many UFO sightings are related to highly classified technology projects that have been developed in top military and corporate scientific facilities, without the public learning the truth about their development, and the link to extraterrestrial visitation. Now, thanks to a growing number of whistleblowers, witnesses and “White Hats” in the military and corporate world, the truth is being fully disclosed to the world.