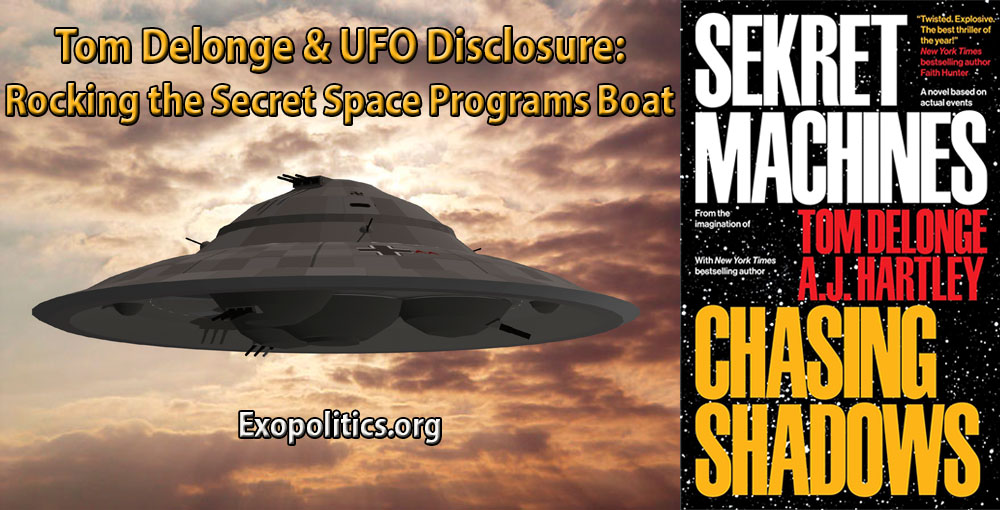 Rock star Tom DeLonge co-authored the book, Sekret Machines: Chasing Shadows, which is the first in a multimedia series of books and documentaries promising to blow the lid off a cover up of Secret Space Programs and the UFO phenomenon. A close reading of the “fiction based on fact” Sekret Machines, suggests that what it more accurately does is expose the reader to the first level of a multilayered set of Secret Space Programs.

DeLonge, a former lead vocalist for Blink 182, is the creator of the Sekret Machines multimedia disclosure initiative, and has enlisted top writers such as A.J. Hartley and Peter Levenda to co-author up to six books. In the preface of Sekret Machines and interviews, Delonge describes how he is being helped by a team of ten advisors with direct links to corporations and Department of Defense entities involved with the U.S. development of a secret space program, and knowledge of a similar program simultaneously developed in Russia and the former Soviet Union.

Sekret Machines is the product of what the advisory team is telling Delonge about their knowledge of the secret space programs that evolved in the US and Russia. According to DeLonge, their revelations are officially sanctioned by those with need to know access, and therefore the most authoritative disclosure yet to emerge on the topics of UFOs, extraterrestrial life and secret space programs.

This leads to the all-important question: is what the advisory team telling DeLonge the full truth about these topics, or only the first layer of the proverbial onion when it comes to secret space programs involving U.S. corporations and different branches of the U.S. military?

Delonge’s secret space program revelations in Sekret Machines need to be carefully compared to what credible sources have to say about these programs. In particular, the testimonies of whistleblowers who have publicly revealed themselves, thereby allowing close public scrutiny of their claims, provide a template for evaluating DeLonge’s revelations. There are two who stand out at the moment as the most credible independent sources of information on secret space programs: William Tompkins and Corey Goode.

Tompkins, a former aerospace engineer, has provided multiple documents, some dating back to the early 1940’s, which support his claimed involvement in the development of U.S. Navy and corporate funded initiatives related to secret space programs. Tompkins says that he was involved in various stages in the design, engineering and construction of a secret space program called “Solar Warden,” up to the time it became operational in 1984.

Goode has provided first hand testimony of direct involvement in the operations of these programs from 1987 to 2007, and more recently in negotiations between Solar Warden and other space related programs. While Goode has provided no documents to directly support his testimony, he has been extensively vetted by a number of sources.

These include the managers of Gaia TV and best selling author David Wilcock, who found him to be credible and subsequently approved a series of interviews called Cosmic Disclosure, which just began its second year. My own analysis of Goode’s testimony in relation to other whistleblower revelations, public documents and circumstantial evidence was also positive, as detailed in the book, Insiders Reveal Secret Space Programs.

What follows is a two part series of articles comparing DeLonge’s version of the history of a corporate funded U.S. secret space program, and what Tompkins and Goode have previously disclosed.

The Role of Nazi Germany in developing a Secret Space Program

In Sekret Machines, Delonge’s revelations coincide closely with the “high octane speculations” of the historian, Joseph Farrell, who has closely studied many Nazi-era documents in a series of books. We are told by DeLonge and Farrell that Nazi Germany was partly successful in developing an antigravity torsion field device called the Bell – Die Glocke. While it was not successfully weaponized in time to assist the Nazi war effort in Europe, it was secretly transported to South America, and eventually Antarctica in an effort by the Nazis to establish a covert Fourth Reich.

The development of the Bell project continued at secret Nazi facilities funded by gold and corporate funds taken out of Germany by Deputy Fuhrer, Martin Bormann, which has been well documented by Paul Manning in the book, Bormann in Exile, and more recently by Farrell in The Third Way.

In Sekret Machines, DeLonge describes how the Nazi Bell project was relocated to Antarctica after South American facilities were compromised by covert allied teams in 1946. The Nazi were able to develop several operational flying saucer craft in Antarctica that were capable of reaching incredible speeds and were highly maneuverable in the atmosphere.

Operation Highjump, led by Admiral Richard Byrd, was successful in locating the Nazi bases in Antarctica in early 1947, according to Delonge. While Operation Highjump suffered casualties, it was able to destroy the Nazi facilities and flying saucer prototypes, and take back to the U.S. the recovered booty in terms of scientists, technical information, and resources related to the Nazi Bell research and development program.

This is where DeLonge’s version of events in Antarctica and genesis of a U.S. secret space program diametrically differs with Tompkins and Goode’s revelations. According to the latter, Nazi Germany had two secret space programs that ran concurrently during WWII.

The Bell experiments and research in Nazi occupied Europe was part of an unsuccessful “wonder weapons” program led by Heinrich Himmler’s SS that was under the direct control of the civil engineer and SS Lieutenant General, Hans Kammler.

In Antarctica, in contrast, another secret space program was headed by German Secret Societies that had successfully developed advanced aerospace technologies with the help of two different extraterrestrial races. One was a group of human looking Nordics, while the other was a species of Reptilians called Draconians.

According to Tompkins, after agreements has been reached with Hitler, the Draconians provided actual working models of flying saucers, and information about underground bases in Antarctica where these models could be reverse engineered during World War II.

Both Tompkins and Goode insist that the German Secret Space Program in Antarctica continued independently of what was happening in Europe under Kammler and the Nazi SS, which was essentially a second-tier weaponization program that was ultimately unsuccessful. At the same time, the first tier German Space Program located in Antarctica had succeeded in reverse engineering the flying saucer designs and prototypes they had acquired.

The Germans subsequently began building fleets of antigravity vehicles capable of deep space missions to the Moon, Mars and beyond. According to Tompkins and Goode, the Reptilians had helped the Germans develop sophisticated weapons platforms for their Antarctica based spacecraft.

The long term goal was that the armed German space craft would eventually join Reptilian interstellar fleets in galactic conflicts. Goode has described the German space fleet as the “Dark Fleet”, due to it being so highly classified that relatively little is known about it, even to the present day.

Byrd’s expedition returned empty handed, and with a powerful lesson that the Antarctica based Germans would be a powerful geo-political force for years to come.

As mentioned earlier, this is a very different account of the Nazi presence in Antarctica to what is found in Sekret Machines. Why the discrepancy? For an answer we need to move on to the next major element in Sekret Machines – the secret development of the TR-3B “Locust” dual purpose antigravity aircraft and space craft.