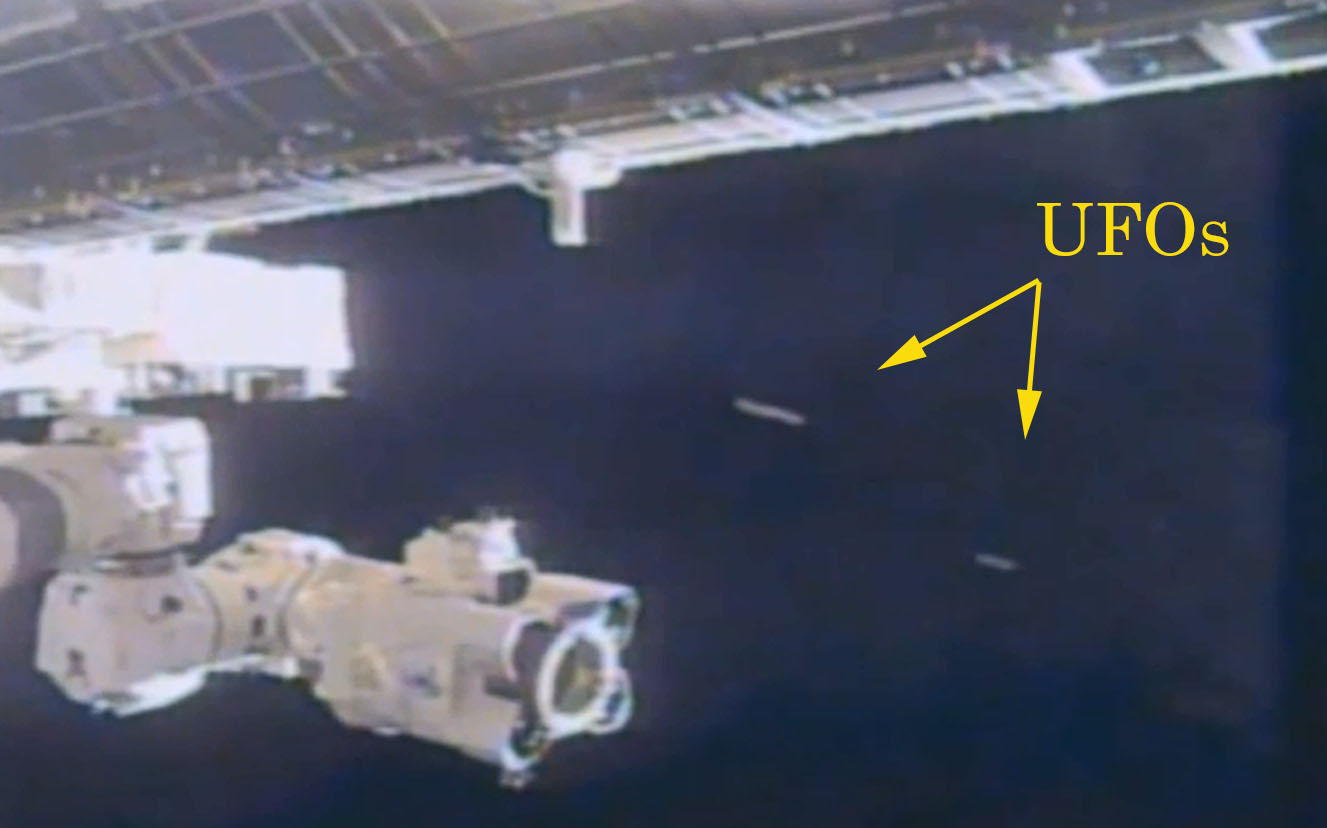 Newly released video from the International Space Station’s (ISS) Live Stream shows what appears to be two cigar shaped UFOs near the ISS. The UFOs briefly appear in the video stream before there is a signal interruption. When the live stream resumes the UFOs are gone. The incident was uploaded to Youtube on October 21 and has already begun generating much discussion. It is difficult to estimate the size of the UFOs but previous sightings of similar cigar shaped objects have been estimated to be aircraft carrier sized, big enough to host smaller UFO craft. Leading astronomers and astrobiologists are now telling us that the cosmos is teeming with exoplanets capable of hosting intelligent life, and we need to prepare for its discovery. This leads to the question, are extraterrestrial ships monitoring the ISS?

The latest video incident follows a string of UFOs being captured by the ISS live stream. On October 7, a UFO appeared near two space walking astronauts. The object was also elliptical or cigar shaped, and appeared to be monitoring the ISS. On January 29, 2014 the live stream showed a yellow elliptical UFO that appeared to actually have docked with the ISS. This raised remarkable possibility that the ISS was being visited by unknown astronauts from a classified military program, or even extraterrestrials.

The main objection against past UFO sightings captured on the ISS live camera feed is that these are lensflares caused by the sun or a strong light source nearby as it hits the camera lens. In the live video feed of the two cigar shaped UFOs, there is no significant change in the ambient light as the UFOs slowly appear in the video. If the UFOs were caused by a lensflare, then their appearance would be marked by a clear change in the ambient light. Nor do the UFO appear to be natural phenomena occurring in the Earth’s atmosphere or surface.

If the two UFOs are not caused by a lensflare, camera malfunction or other natural phenomena, what are they? The UFOs may be intelligently guided cigar shaped spacecraft that have been reported by military and government whistleblowers to be very large in size.

One possible explanation is that they belong to a secret space fleet. Another explanation is that the UFOs are extraterrestrial in origin. As far back as the early 1950s, cigar shaped UFO have been regularly sighted and photographed. The most famous photographs were taken by George Adamski who filmed smaller scout ships emerging from larger cigar shaped UFOs near the moon. In a related 1952 incident, Adamski and six witnesses claimed to have sighted a large cigar shaped UFO fly overhead. It was soon followed by a smaller “scoutcraft” that landed near Adamski, who met the extraterrestrial pilot.

The International Space Station’s live camera feed continues to capture strange nearby objects through its various external camera systems. Some of these objects might be explained away as lens flares or natural phenomena. Not so however for all other incidents that likely include the two cigar shaped UFOs captured  on October 21. If these two UFOs are under intelligent control, they could be spacecraft from a secret space program or from an extraterrestrial intelligence. If extraterrestrials are indeed monitoring the ISS, they may be allowing their spacecraft to be captured on video in a First Contact scenario.