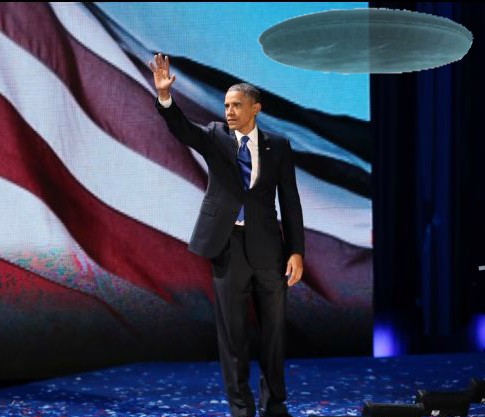 In Tuesday's U.S. Presidential election, Barack Obama won a narrow but clear victory over his Republican opponent. Democrats held on to their Senate majority, and Republicans maintained control over the House of Representatives. The next twelve months or so will be when Obama moves forward with his most ambitious re-election policies before the 2014 mid-term elections return the United States again to the hyper-partisan politics that produced gridlock for the last two years. Republican control over the House will ensure that there is plenty of opposition to much of Obama’s legislative agenda. This will not be the case though with immigration reform to finally deal with the question of illegal aliens. Severely punished by the Latino vote, Republicans are sure to give bipartisan support to Obama in passing a new DREAM Act to legalize the status of young illegal aliens raised in the USA. What however of another type of illegal alien claimed to be visiting the USA? Does UFO extraterrestrial disclosure figure at all in Obama’s political agenda?

When Obama first became President there were many hopeful signs that his push for more transparent and accountable government would translate into greater openness where the truth would finally come out about UFOs and extraterrestrial life. His appointment of Hillary Clinton to Secretary of State fueled rumors that her documented interest in UFOs in the Clinton administration would lead to some startling disclosures. Whistleblowers were ready to come forward to testify about a host of illegal government activities if they were given protection to reveal their secrets. This culminated in the belief that disclosure of extraterrestrial life was imminent early in the Obama administration. Four years later, those early hopes look positively naïve. Government transparency did not open up national security archives to researchers, and whistleblower protection did not happen after all. The Obama administration went on the record to disavow any interest in investigating claims that the Roswell crash really involved otherworldly UFOs. There was no disclosure of extraterrestrial life visiting our world.

What has changed, four years after Obama’s first Presidential election, is that the world is better prepared for accepting that extraterrestrial life exists. Here are three scenarios of how Obama might announce the existence of alien life during his second term of office.

Scenario 1 – Alien life found on exoplanets. The deployment of advanced space telescopes such as NASA's Kepler Mission, has led to the discovery of hundreds of exoplanets. This has revolutionized the scientific community. The question, “do habitable conditions for life exist elsewhere in the galaxy?” has been decisively answered in the affirmative. Statistics tell us that some, if not many, of the billions of exoplanets projected to exist in our galaxy alone, are sure to host some form of life. The world’s foremost scientists are now openly discussing the scientific and social consequences of extraterrestrial life being discovered. The question is now “when” rather than “if” extraterrestrial life will be discovered by the next generation of space telescopes used to scan the galaxy.  The new Obama administration will continue to fund NASA scientific missions, making it possible that at some point in his second term, he can announce that we are not alone in the galaxy.

Scenario 2 – Roswell Crash really did happen. This scenario concerns claims that extraterrestrials are visiting us now and select government agencies have been covering this up since at least July, 1947, when the famous Roswell crash incident occurred. As most are aware, the US Army Air Corps released a statement on July 8 that a flying saucer had crashed, but retracted it hours later. Chase Brandon, a former CIA clandestine officer and public relations representative has claimed that he saw a file in the CIA historical archive that settled any personal doubt he had that the Roswell flying saucer crash really did involve extraterrestrial life and technology. Chase’s claims echo those of Lt. Col. Philip Corso, who led the Foreign Technology Desk at the US Army Research and Development department. Corso claims the U.S. Army had a filing cabinet with material from the Roswell crash that was leaked to private industry to spark technological development. During Obama’s second term, more material/evidence from the Roswell crash may leak, and/or witnesses come forward to reveal that extraterrestrial technology was indeed recovered. Several petitions have been launched with the Obama White House to achieve this goal.

Scenario 3 – (Contrived) War of the Worlds. There have been claims by Gordon Duff, a senior editor of Veterans Today, John Kettler and others of secret battles in the Pacific Ocean and Antarctica between a coalition of US-led Naval forces and extraterrestrials based in undersea bases. So far, there has not been any hard evidence to support such claims, only anonymous sources that are not revealed by Duff, et al. A Stalin era intelligence file released in 1991 revealed that the Admiral Byrd’s Antarctic expedition, Operation Highjump, did encounter and battle with a mysterious UFO force in early 1947. A succession of Hollywood blockbusters, Battleship, Battle Los Angeles, and the Avengers all focus on an extraterrestrial invasion theme. Is the public being conditioned to accept the possibility of an extraterrestrial invasion for a contrived national security crisis? According to former chief Apollo scientist, Werner Von Braun, a contrived alien invasion has been planned for several decades. Could President Obama one day find himself publicly responding to a national security crisis where US and allied military forces are under (a contrived) attack from an alien presence?

Any of the above or alternative scenarios might occur in the next year, or before the end of Obama’s second term of office in January 2017 – so what would happen? Obama’s award of the Nobel Peace Prize; mixed racial heritage; and an eclectic religious upbringing with a Christian mother, a Muslim father and stepfather, and six years spent in Muslim Indonesia as a youth, make him ideally suited to become a highly popular world leader.If it was decided that the existence of extraterrestrial life – due to scientific discovery and/or political necessity – was to be announced to the world, then President Obama would be the ideal candidate for the job.

Extraterrestrial disclosure would very likely overcome national differences and lead to rapid political unification at a planetary level, as President Reagan speculated in a General Assembly speech at the United Nations in 1987. We could very quickly expect world-wide planetary elections for national citizens to be represented in direct dealings with Galactic civilizations. This could be achieved either through significant reform of the United Nations (which currently represents “states” and not “people”), or through the creation of a “United Earth” sovereign body representing the people of Earth. In either case, any formal announcement by President Obama of the existence of extraterrestrial life would start a series of events where he would predictably take a more global leadership role in representing the people of Earth in negotiations with galactic visitors. So when President Obama and his bipartisan Republican allies pass a revamped DREAM act for illegal aliens, let’s dream of what would happen if the existence of off-planet aliens were also to announced by the White House sometime in the next four years.