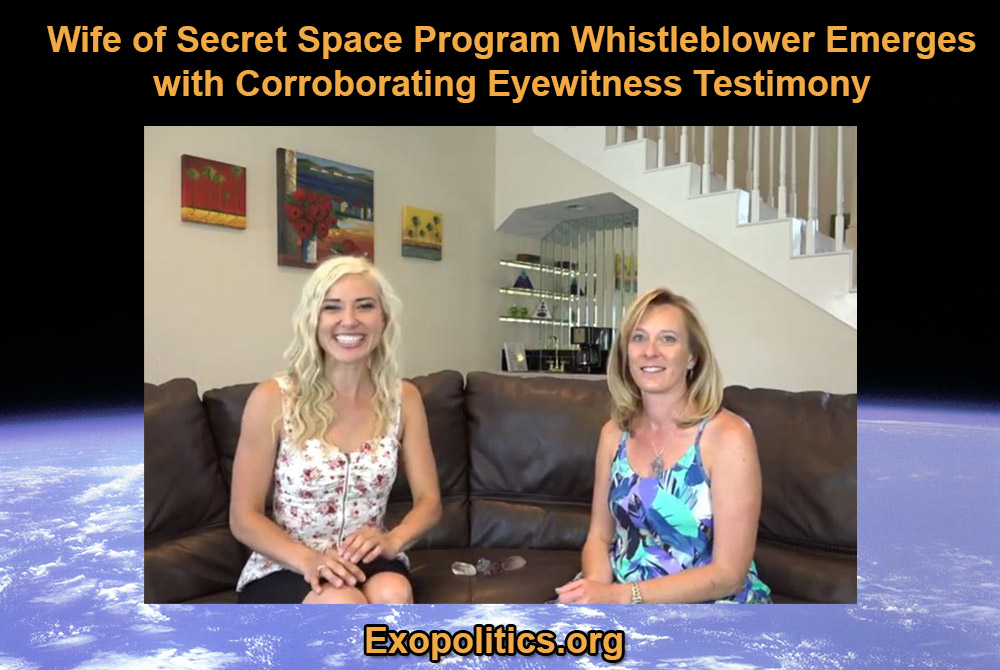 Corey Goode’s wife Stacy has stepped forward to give her first public interview where she describes her own personal experiences pertaining to Corey’s claims of having served in multiple secret space programs. Her testimony is very significant since it provides an eyewitness account of events that directly relate to Corey’s claims of having served on up to three “20 and back programs” with multiple secret space programs.

In the interview released today by Teresa Yanaros on her Divine Frequency Youtube channel, Stacy discusses how she first met Corey in 1990, and the events that led to their marriage in 1993. In an early hint of what lay ahead, she vividly describes a UFO incident she saw with Corey along with other witnesses, including a pilot who confirmed the UFOs were not aircraft.

Stacy revealed that Corey told her early in their marriage about remembering having served on a “20 and back” secret space program. This is significant since Corey has said that when he was returned back in time from 2007 to 1986, and age regressed back to 16 years of age, that he remembered most of his experiences with the Solar Warden program that had been established by the U.S. Navy.

Stacy says that after their marriage Corey went on to establish himself in the Information Technology (IT) industry where he eventually was earning well over $100,000 a year. This corroborates Corey’s testimony that he was very successful in his IT career before going public with his claims. His resume is available online and lists many companies where he worked as an IT expert, which can be confirmed by investigators.

Stacy described how in 2013 the “normal life” they had established for themselves and their two children dramatically changed. Corey had an accident where he experienced a detached retina that required surgery. After the surgery procedure, Corey experienced “total recall” where in addition to his “20 and back” service with the Navy’s Solar Warden program, he recalled two more “20 and back” terms of duty with space programs that had much darker agendas.

Corey’s memories were very traumatic, as he recalled the terrible things he had been forced to do in an “intercept and interrogate program” involving extraterrestrial visitors. Stacy says that the recovered memories so traumatized Corey that he became suicidal.

That is when Corey says he had his encounter with personnel from a Mayan Secret Space Program who helped heal him from the memories. Stacy describes in detail the night when the encounter happened at their duplex Texas home. She walked into the meeting Corey was having and saw it. She described throwing up her hands and saying, “I am not seeing this, I do not want to see this,” then turned around and left.

The next morning, recalling something strange had happened that night, she asked Corey about it. He told her about the incident, and she then remembered what had happened. Stacy’s eyewitness account of seeing the Mayan Secret Space program personnel helping Corey is very significant since it shows that Corey is not hallucinating or making up his stories of encounters with the Mayans, secret space program personnel and extraterrestrial visitors. Stacy went on to describe physical evidence she encountered of spacecraft landing in her Texas backyard and abducting/taking Corey. She says she saw physical evidence of a craft of some kind landing which had landing pads that formed a triangular shape, and footprints leading up and from where the craft had landed.

Stacy’s eyewitness account of physical evidence showing a craft of some kind landing in her backyard corroborates Corey claims of being regularly abducted/taken by a US Air Force Secret Space program investigating his claims of serving in a “20 and back program” with an alleged US Navy program called Solar Warden.

Stacy Goode’s eyewitness testimony is very important for all investigating the secret space program claims of Corey Goode since it is very credible and admissible in a court of law. Her direct experiences is evidence that Corey is not contriving his stories and that he was thrust into the public limelight after being unwillingly outed by others who did not respect his wishes for anonymity.

I have been investigating Corey Goode’s disclosures since March 2015, and in all that time have found no credible evidence that he is fabricating his claims. On the contrary, I find him very consistent, honest and a credible eyewitness of extraordinary events whose testimony is supported by leaked documents, multiple whistleblower testimony and circumstantial evidence, as I have detailed in two books (see here and here). Stacy’s eyewitness testimony needs to be seriously considered by all still unsure about the veracity of Goode’s secret space program claims.