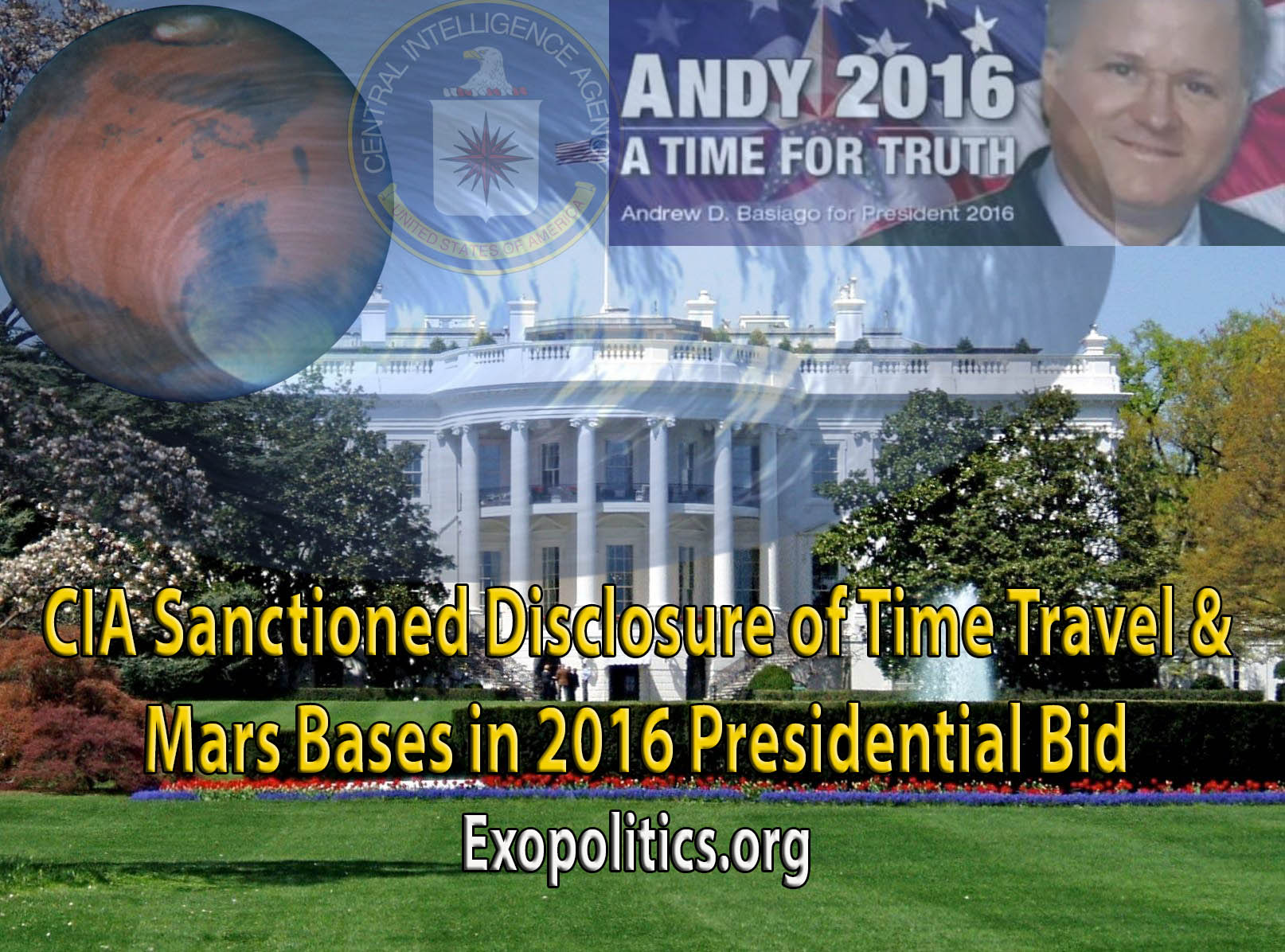 In part two of this series, it was claimed that CIA “White Hats” had begun in 1980 to groom Barack Obama as a future U.S. President, while simultaneously grooming Andrew Basiago to follow him some time after into the White House.

Basiago’s path to the Presidency would follow a different trajectory than Obama’s more traditional grass roots political career in one of the two major U.S. political parties. Basiago would instead become a whistleblower and disclose his involvement in two classified programs – Project Pegasus and a CIA Jump Room Program to Mars. Basiago’s disclosure testimony would subsequently underpin his “Truth Campaign” to become U.S. President.

If Basiago’s claims are accurate about he and Obama being groomed as future Presidents, which includes what the CIA “White Hats” exposed Basiago to during his childhood and early adulthood, then what is the ultimate agenda of these alleged “White Hats”?

For an answer, we need to return to Basiago’s core claim that one of the purposes of the time travel technologies was to identify future U.S. Presidents. In part one, it was pointed out that during Project Pegasus, a number of U.S. Presidents and Vice Presidents were “pre-identified” and then briefed by CIA/DARPA personnel, after which Basiago met them during informal lunches.

Later, during the Mars Jump Room training, Basiago claims that he and Obama were also pre-identified as future Presidents. This is a perplexing scenario given Basiago’s claim that he and Barack Obama were sent to Mars to basically only maintain a specified threshold of humans physically present, while escaping life threatening situations from marauding Martian predators. They were told:

“Simply put, your task is to be seen and not eaten.”

Why would two allegedly pre-identified U.S. Presidents to come, be treated in such a dangerous and callous way?

One answer is that such experiences were part of the “grooming” of Obama and Basiago for their future roles. Both would be taught to fear the power of their CIA handlers, who had the power of life and death over them. Arguably, such experiences would make them more amenable to CIA influence if they succeeded in being voted into high political office.

Yet such an answer doesn’t satisfactorily explain why some pre-identified future Presidents would be exposed to a classified space program involving Mars, when other Presidents like Kennedy, Carter and Clinton, were denied access to similar information.

In the case of President Kennedy, his efforts to get access to classified UFO files were a direct factor in his assassination through the direct complicity of the CIA as discussed in the book, Kennedy’s Last Stand.

There is also credible testimony that President Carter was flatly denied access to classified UFO files by the outgoing Director of the CIA, George H.W. Bush.

In the case of President Clinton, he appointed a close friend, Webster Hubbell, to the third most senior Department of Justice position, in order to find answers to two questions: “One, who killed JFK? And two, are there UFOs?”

Why would Barack Obama, for example, have been given access to such highly classified information, when it was denied to Kennedy, Carter and Clinton?

Was Basiago subjected to mind control to make him believe events concerning Obama and teleportation to Mars occurred as he recalled, or was being told? In this regard, he does acknowledge “that people were brainwashed when they entered these kinds of projects and when they left.”

Did such brainwashing happen with Basiago? If so, it is possible that Basiago’s recollections of Barack Obama’s participation in the Mars Jump Room Project was contrived by his CIA handlers.

In part two, it was pointed out that investigative reporter Wayne Madsen, in 2010, was the first to raise the possibility that Obama was groomed by the CIA to become a future President. Was Basiago brainwashed to include the Mars teleportation element to Obama’s background to muddy the waters so Madsen’s earlier claim could be more easily discredited?

While possible, there is significant evidence supporting Basiago’s version of events here.

Obama did attend Occidental College in Los Angeles at the time Basiago claims that he, Obama and others were traveling to a secret jump room facility at 999 N. Sepulveda Boulevard in El Segundo, California in 1980. The distance between Occidental College and El Segundo is approximately 25 miles.

Also, according to Basiago, Obama used the name Barry Soetoro during his participation in the CIA Mars Jump Room Program. This is supported by researchers who have found college transcripts showing Obama did use that name in the past, including his time at Occidental College.

Finally, two other whistleblowers, Brett Stillings and Bernard Mendez have come forward to confirm their participation in the Mars Jump Room program, and Barack Obama’s involvement. They support Basiago’s claim that Obama used the name Barry Soetaro during the covert program.

Incredibly, Basiago may have been right all along that Obama, aka Barry Soetoro, was a participant in a classified CIA project where participants were led to believe they were secretly traveling to Mars through classified teleportation technologies. Whether they actually travelled to Mars or not, it’s possible that Obama was recruited and trained as a CIA asset during his time at Occidental College. This is consistent with what Madsen had earlier claimed about the Obama CIA link.

One thing is clear from Basiago’s narration of events recalled from his youth during Project Pegasus, and later from the CIA Mars Jump Room program. Principal CIA figures, including his father (Raymond Basiago), were in favor of disclosure of the time travel and jump room technologies, and encouraged Basiago down a path towards that end.

The picture that emerges of the CIA clandestine services branch is very benign, to say the least. The CIA is involved in the development of time travel and jump room technologies for intelligence gathering purposes, and has key officials encouraging Basiago to believe he will be a future President with the power to one day disclose such technologies to the world.

This takes us back to the December 19 announcement of Andrew Basiago running for U.S. President. He is running as a write-in candidate in those 43 states that allow this. The cost of being on the ballot for all 50 states is estimated to be $5 million, and Basiago rightly objects to paying such an exorbitant amount to simply present an alternative choice to the U.S public.

Basiago clearly believes his 2016 candidacy is a serious bid. This is based on his insider knowledge about his foreseen future role, discovered within a number of classified programs run by the CIA and DARPA of which he was a participant.

While Basiago’s 2016 Presidential campaign appears quixotic at the moment, even a partial disclosure of an extraterrestrial cover-up by government authorities would lead to a powerful public reaction against major political parties.

Such a reaction could give momentum to Basiago’s candidacy for 2016, or perhaps 2020, potentially raising it to a more serious level, given the public’s desire for the truth to be revealed. The detailed testimony of Basiago would reveal some of this desired truth.

What is worth keeping in mind in contemplating these future possibilities is that the CIA, according to Basiago, has gathered intelligence on such scenarios through time-travel technologies. Just as the CIA allegedly groomed Obama to be President, similarly, “White Hats” in the CIA have groomed Basiago to play the whistleblower role he is currently playing.

Basiago has declared that he is leading a “Truth campaign” in his 2016 Presidential bid.  Yet another powerful force appears to be a covert CIA operation, which according to Basiago’s testimony, pre-identified him decades ago as a future President promoting an extraterrestrial and secret space program disclosure platform.

While Basiago clearly believes he was, and perhaps still is, supported by “White Hats” in the CIA, there are good reasons why even alleged CIA White Hats should not be trusted. While as a child and young adult, Basiago clearly believed that his father and other alleged CIA White Hats were telling him the truth, there is no reason why the general public should accept this belief. He may very likely have been subjected to mind control to alter his memories of past or future events.

Basiago’s detailed testimony about his involvement in two classified programs run by the CIA does reveal important and significant information about key personnel, events and institutions involved in these programs. The sheer volume of details and information he has released is very impressive, while his subsequent investigations, along with supporting witnesses, suggests that a significant portion of it is accurate.

Consequently, Basiago appears to be a genuine whistleblower and understandably believes that his 2016 Presidential run is the real deal. Yet, Basiago, by his own testimony, was pre-identified and groomed as a future whistleblower by the CIA to reveal information about classified projects. His disclosures appear to be part of a psychological operation with a big long term agenda, which of course includes depicting the CIA in very favorable terms.

For example, Basiago does not discuss the role of German Secret Societies and the Nazi SS in pioneering the first space and time travel technologies, and infiltrating the U.S. military industrial complex in the 1950’s. There are significant differences between “limited” and “full disclosure” scenarios, as discussed at length in the book Insiders Reveal Secret Space Programs and Extraterrestrial Alliances.

While evidence suggests Basiago has released valuable information about the development and use of time travel, and teleportation technologies, there is good reason to be very cautious about supporting his “Truth campaign” with its “limited disclosure” scenario influenced by CIA “White Hats.”

Andrew Basiago’s 2016 Presidential campaign opens the door to illuminating a covert world of secret space programs and extraterrestrial life. We should all be thankful for his public disclosures and attempt to bring these issues into the 2016 Presidential race as a serious topic. Ultimately, this can aid the much bigger “full disclosure” scenario as truth breaks free from its CIA shackles.