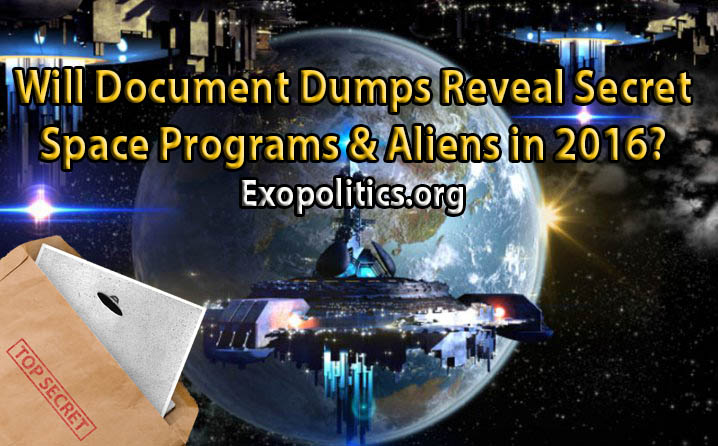 In June 2015, details emerged of a “full disclosure” plan allegedly developed by an alliance of Secret Space Programs to reveal to the world the truth about these highly classified programs and the existence of extraterrestrial life. According to Corey Goode, who claims to have worked in several secret space programs for 20 years and in early 2015 was appointed as a liaison for a visiting group of extraterrestrials, the “full disclosure” plan envisaged massive document dumps.

In his June 15 response to a question about what the full disclosure plan involved, Goode wrote:

Goode then contrasted this with a “partial disclosure” event that was being planned by a group of human elites often described as the Illuminati/Cabal:

In a series of three Secret Space Program related meetings held in June 2015, Goode reported that the Cabal/Illuminati were willing to proceed with their own limited disclosure event, and gave late November 2015 as a possible “partial disclosure” date if agreement could be found with the Secret Space Program Alliance. Agreement was not found and so at the start of 2016 we find ourselves in the position that there are two disclosure plans that are ready to move forward when the right conditions have been reached.

In the most recent episode of Cosmic Disclosure with David Wilcock, Goode explained what conditions needed to be reached for the full disclosure plan to move forward:

I’m told that the data dumps are going to occur after a catalyzing event that’s going to occur down here on the surface. This doesn’t necessarily mean it is going to be [what I am about to say], but an example [that] was given to me [is] something like a global economic meltdown, to where it became obvious to everybody on the surface, all of the sleeping masses, that [the economy has] been a giant Ponzi scheme [from the beginning]. Everybody that they voted for and supported [in government] were criminals in [the Cabal’s] pockets. And the masses of people that were normally asleep and wouldn’t listen to things that people consider “conspiracy theory”, will now be open to the information. After that point, the information will be dumped on [to] the population through many different media [outlets], including the internet.

Another important constituency in this battle between the Secret Space Program Alliance and the Cabal/Illuminati over the scope and timing of “official disclosure” is what Goode describes as the “Earth Based Alliance.” This Alliance primarily comprises “White Hats” inside the U.S. military industrial complex along with “White Hats” in other major nations, which are cooperating with the BRICS bloc of nations (led by Brazil, Russia, India, China and South Africa) in launching an alternative financial system that would be a part of the official disclosure process.

Complicating the full disclosure plan advocated by the Secret Space Program Alliance is technology possessed by the Cabal/Illuminati that can accurately predict future events using Artificial Intelligence (AI) to delay the disclosure process, by encouraging defections from the Earth Based Alliance. The following exchange between Goode (CG) and Wilcock (DW) in the latest Cosmic Disclosure episode reveals the problems caused by such technology:

CG –… The cabal has been using this advanced artificial intelligence technology that gives them probable future scenarios that has helped them stay one step ahead this whole time. [The (Secret Space Program) Alliance has] found a way around this and they’re pretty confident that they’ll be able to do the data dumps if the alliance on the ground cooperates [Earth based Alliance]… but if the data dumps happen too soon, the cabal will be able to mitigate it, call it “conspiracy theory”, tear it apart, and take it down.

DW – And you said that some of the people in the Earth-based alliance have now treasonously told the cabal what’s in the data dump?

DW – Which gives them the opportunity to prepare alibis and counter arguments for it.

CG – Right. And it’s also made them want to create a WW3 scenario and that kind of stuff.

If Goode is accurate in his descriptions of the dynamic interplay between the different factions over the scope and timing of disclosure, then it is clearly very hard to predict when and if “full disclosure” will happen.

Goode’s admission that key factions in the Earth-based Alliance have defected to the Cabal/Illuminati suggests that the conditions described by Goode, for a “catalyzing event” that prepares humanity for full disclosure through “document dumps”, is being actively prevented from occurring.

In a comment to an article, Goode described such a scenario as follows:

[S]ome of the “Earth Alliance Groups” have been infiltrated and are now looking to make deals with these “Cabal Groups” based on a replacement financial system where they will have more power (“The West had its 100 years, now the East will have its 100 years” is a quote that is circulating among the Earth Based Alliance Groups). The new financial system will be yet another Debt/Slave system controlled by just another group of people. They plan on clearing peoples’ debts and giving them free money in the beginning to give people hope and cause them go get excited about a new financial system.

The ability to foresee and prevent the necessary conditions for “full disclosure” to occur suggests that the Cabal/Illuminati, and the defecting factions from the Earth-based Alliance, are likely to go ahead with a limited disclosure plan. Such a plan will release some advanced technologies and reveal the existence of extraterrestrial life. This will be done in a way that will, as Goode says, allow the Cabal/Illuminati to maintain their power and escape prosecution for their crimes.

The control over the world’s major media and communication channels by the Cabal/Illuminati, suggests that it has tremendous resources at its disposal to spin any major international event in a way that promotes its ultimate agenda. Thus, the “catalyzing event” that the Secret Space Program Alliance is waiting for can be mitigated, and/or spun in a way that might not create the necessary global psychological receptivity desired for “full disclosure” via massive document dumps.

Consequently, there appears to be a deep flaw in the strategic planning of the Secret Space Program Alliance, as Goode has explained their reasoning. Put simply, waiting for the right global conditions for the document dumps to occur, gives more time for the Cabal/Illuminati to prepare and move forward with their own “limited disclosure” plan.

Once the “limited disclosure” plan goes forward, then the global changes it creates will allow the Cabal/Illuminati more options to maintain its global influence and escape accountability for past criminal actions. We have already seen this to an extent with the U.S. Congress and President Barack Obama approving an asteroid mining law that effectively gives corporations, secretly involved in space mining, free reign in space up until 2022.

Divide and conquer is a strategy the Cabal/Illuminati understands all too well in dealing with the different Earth-based Alliance factions. Their cooperation is necessary for “full disclosure” to occur as desired by the Secret Space Program Alliance.

An alternative solution would be to start releasing some of the documents possessed by Secret Space Program Alliance into the public realm. The benefits of starting “full disclosure” with a trickle of documents are numerous:

It is not unprecedented for official documents concerning UFOs/extraterrestrial life to be released in a trickle to the public. This previously occurred with the “Majestic Documents,” beginning in the 1980’s, which were released by “White Hats” in the CIA and others in the U.S. national security apparatus to UFO/exopolitics researchers.

The Majestic Documents were released over an approximate twenty year period starting from 1984. They have been investigated by leading UFO researchers such as Dr Robert Wood, who has used rigorous document verification techniques to confirm their authenticity.

Given the high risks involved in waiting for a catalyzing event for full disclosure to occur, it would be wise to begin the document dump process as soon as possible in 2016, with a trickle that can be easily accelerated as the general public becomes more receptive to learning the truth about secret space programs and extraterrestrial life.