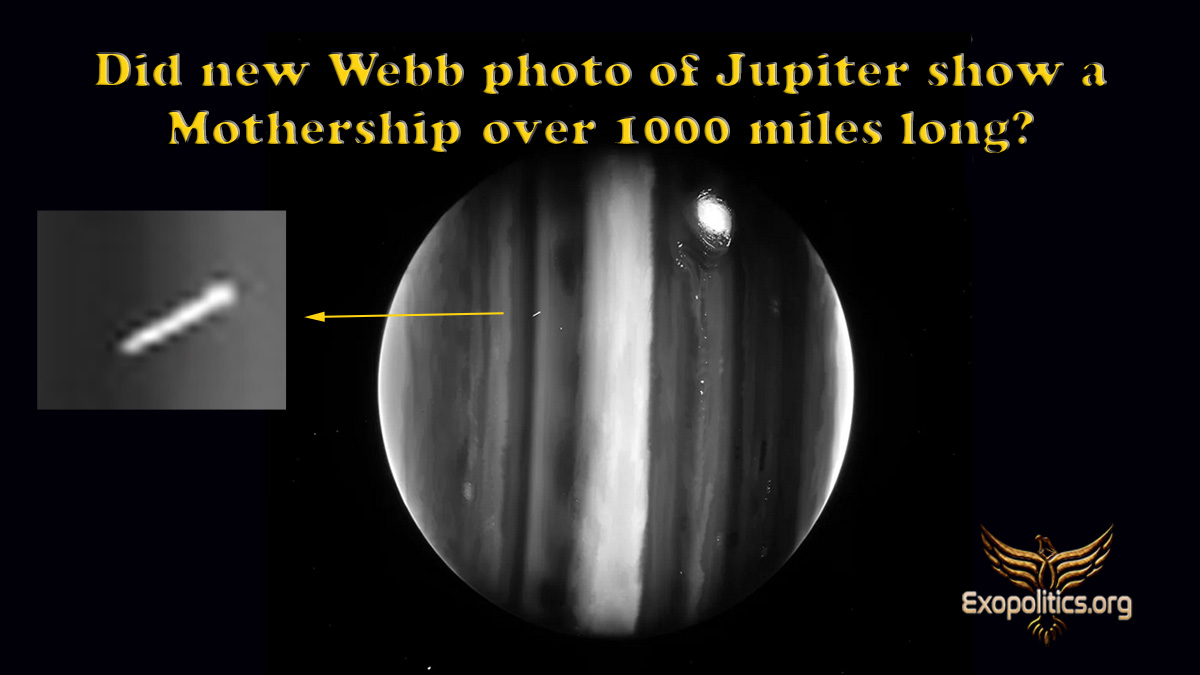 Does new Webb photo of Jupiter show a Mothership over a thousand miles long?

On July 27, 2022, the James Webb Space Telescope released an image of Jupiter’s Great Red Spot using one of its infrared cameras. The image contains a cylindrical-shaped object floating high above Jupiter’s atmosphere that appears to be more than a thousand miles long. The image corroborates claims of giant spacecraft recently arriving in our solar system and parking in the vicinity of Jupiter.

Space.com was among the first news outlets to release the new Webb image of Jupiter and explained that it was taken using the Near Infrared Camera. In addition to the Great Red Spot, Webb was also studying bands in the gas giant’s atmosphere. However, the Webb image also caught a very large cylindrical-shaped object whose direction of motion could be traced directly to the Giant Red Spot.

The object appears white in the filter, as does the Giant Red Spot. Also, the thing seems to be very close to Jupiter, which makes possible an estimate of it being several thousand miles in length. If the object is closer to the Webb telescope, which is one million miles away from Earth, facing away from the sun, then that would make it harder to estimate the object’s true size. Importantly, the object is unlike any of the smaller objects making up Jupiter’s bands or near the Giant Red Spot.

One of my sources, JP, who currently serves with the US Army, sent me the above Webb picture of Jupiter and believes it is a mothership drawing energy from the Red Spot. This is what he told me via Skype:

The red spot is hotter than most areas.

A great source of energy for the ships

This is amazing you can [can’t] see if the ship is heading towards the storm or coming out from the storm but you can see the direction.

JP subsequently told me “that we were going to be shown soon all these ships and that people were going to see them” and, incredibly, some of these motherships are 6,000 miles long according to JP. This suggests that the Webb image is part of a disclosure initiative to reveal the truth about extraterrestrial visitation.

This is supported by NASA’s current program to use the Webb Telescope to study the distant universe and our solar system, with Jupiter being a particular focus of attention.

If the cylindrical object is a mothership that is several thousand miles in length, as JP contends, then its size would make it capable of accommodating millions of people and thousands of smaller spacecraft.

The Webb image and JP’s data about Jupiter corroborates information previously released by Elena Danaan concerning the composition of the extraterrestrial fleets she described as belonging to the Seeder races (aka Intergalactic Confederation). She provided an illustration of the different craft and beings that belonged to the Seeder fleets, one of which had a cylindrical design. 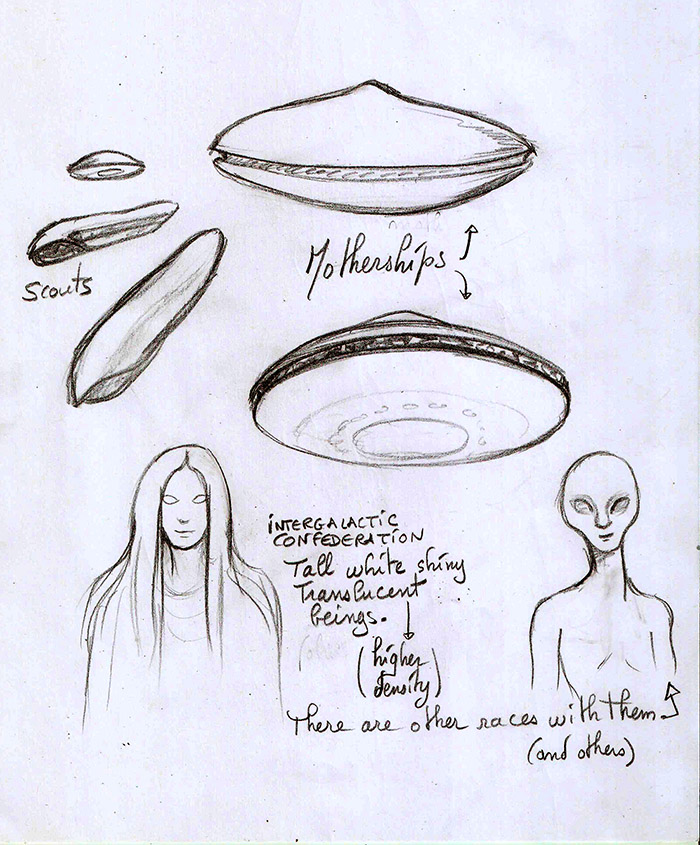 In an August 31 Skype conversation, Danaan said that the cylindrical shaped scout craft of the Intergalactic Confederation are 20 miles long and that the saucer-shaped mother ships are far bigger than that.

This is the second Webb image of Jupiter that shows a very large anomaly high above its atmosphere. The first image from July 13 showed a massive moon-sized dark area between Europa and Jupiter. According to information Danaan received from her contact Oona (a member of the Intergalactic Confederation), the object was a mix of large rocks and spacecraft parked in Jupiter’s orbit.

In conclusion, estimating the size of the cylindrical-shaped object photographed above Jupiter is difficult as we can’t be sure whether it’s closer to Jupiter or the Webb telescope. If the object is close to Jupiter, then it’s likely to be thousands of miles in length, as claimed by JP. If the object is closer to the Webb Telescope, then it could be a 20-mile-long cylinder shaped Intergalactic Confederation scout craft as described by Elena Danaan.

If JP is correct, we can expect to learn the truth soon about that and many other extraterrestrial spacecraft that have recently arrived in our solar system, as the Webb Telescope is releasing images that are part of an official disclosure initiative. The disclosure of a newly arrived extraterrestrial space fleet with giant mother ships parked around Jupiter would have an enormous impact on global politics, science and technology, and world religions.

To learn more about the role of extraterrestrial civilizations in historically shaping human society especially in relation to historic texts from around the world describing creator gods and their return, I highly recommend my August 13, 2022 webinar, “World Religions and Extraterrestrial Contact.”

Video Version of this article is available on YouTube & Rumble.

Many thanks to Elena Danaan for permission to include her drawing of different spacecraft and extraterrestrials comprising the Intergalactic Confederation fleet parked around Jupiter.

[Update Aug 4, 2022 – A higher resolution version of the JSWT image of Jupiter found in the Space.com article is available here or click image below to expand] 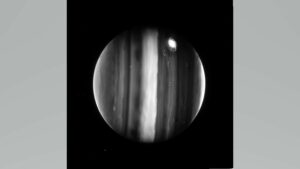 [Update Aug 2, 2022 – Below is a close up of the object floating above Jupiter in JWST photo I discussed in the above article. Notice shadow it casts. Shows object is very close to Jupiter, rather than something closer to the JWST, or dust on the camera lens. Clear evidence of a giant mothership parked around Jupiter.] 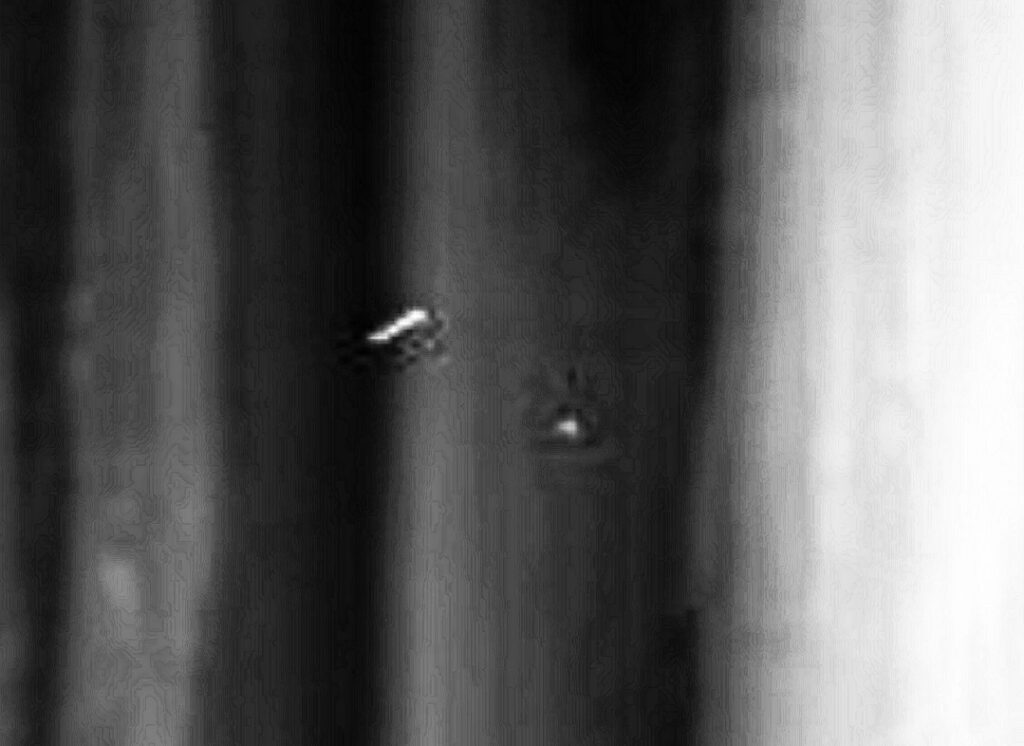 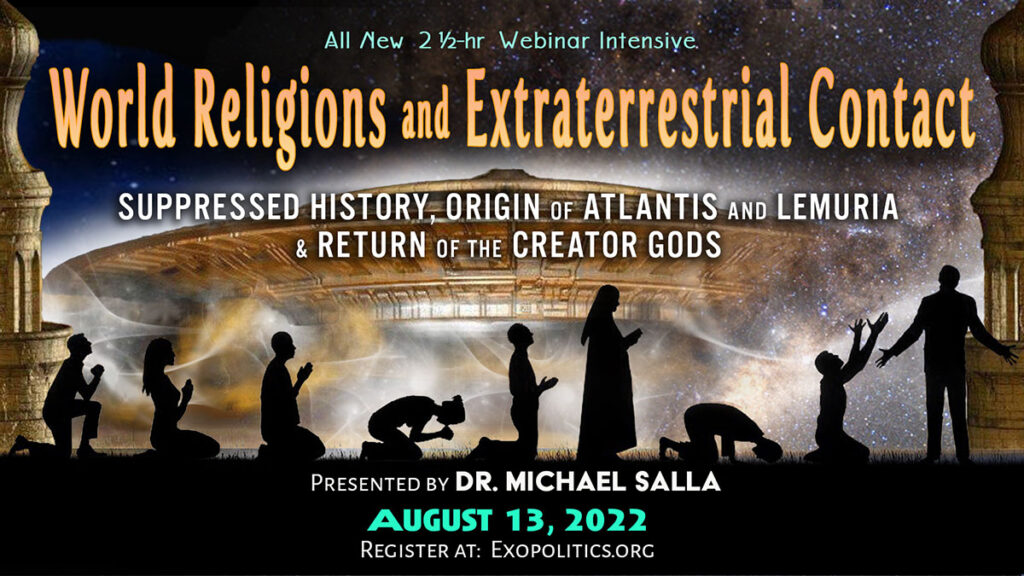