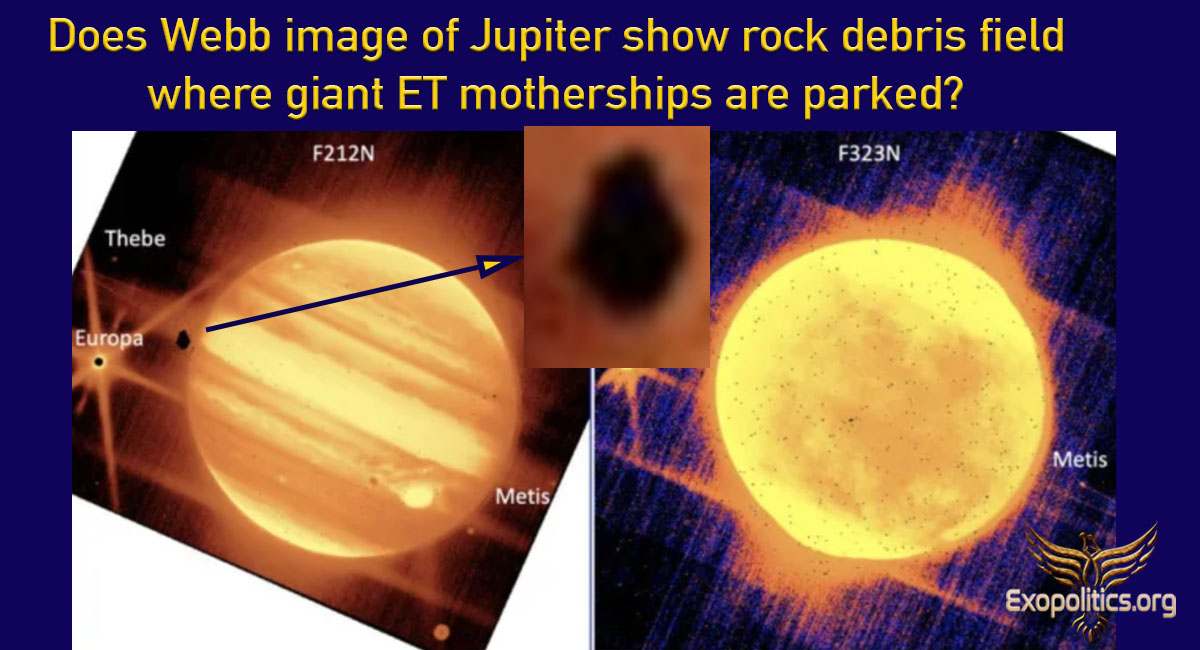 On July 12, NASA held an international live stream releasing the first official images from the James Webb Space Telescope showing distant exoplanets, galaxies, nebula, and a glimpse deep into our universe. The next day, NASA stealthily released an image of Jupiter taken by the Webb Telescope, which showed a noticeable dark field just above the gas giant’s atmosphere. Was it a shadow, as NASA appeared to claim, or something entirely different – part of a newly arrived extraterrestrial space fleet secretly parked around Jupiter?

According to the NASA webpage announcing the release of the first Webb Telescope images:

These listed targets below represent the first wave of full-color scientific images and spectra the observatory has gathered, and the official beginning of Webb’s general science operations. They were selected by an international committee of representatives from NASA, ESA, CSA, and the Space Telescope Science Institute. These first images from the world’s largest and most powerful space telescope demonstrate Webb at its full power, ready to begin its mission to unfold the infrared universe.

The NASA live stream began with a “deep field” image showing a portion of the universe “teeming with galaxies,” which, according to Jane Rigby, a Webb Operations Scientist, had “a sharpness and clarity we never had.”

Next was an image of a gas giant exoplanet (WASP 96b) transiting its star, which is about 1,120 light years away from Earth. The Webb Telescope provides a far more detailed spectroscopic analysis of the background sun and subsequently deducing the exoplanet’s atmosphere than was possible with its predecessor, the Hubble Space Telescope. According to a NASA Press Release, an analysis of the exoplanet’s transit shows telltale signs of water in its atmosphere.

The third image released by the Webb Telescope showed a planetary nebula (aka Southern Ring Nebula) approximately 2,500 light years away. The fourth image showed a grouping of five galaxies called Stephan’s Quintet, the closest of which is about 40 million light-years away.

The fifth and final image showed the Carina Nebula that is in the process of creating new stars, which was yet again a distant region, approximately 8,500 light-years away.

NASA decided not to release images of Jupiter during the live stream, which would have given the most detailed images of our solar system’s largest planet to date. This was disappointing as multiple sources have claimed that Jupiter has recently experienced something extremely rare—it is surrounded by newly arrived fleets of giant spacecraft belonging to extraterrestrial Seeder races!

However, on the next day, July 13, NASA stealthily released an image taken of Jupiter by the Webb Telescope. The image showed Jupiter along with several of its moons, Europa, Metis, and Thebe. It also showed a faint ring around Jupiter. 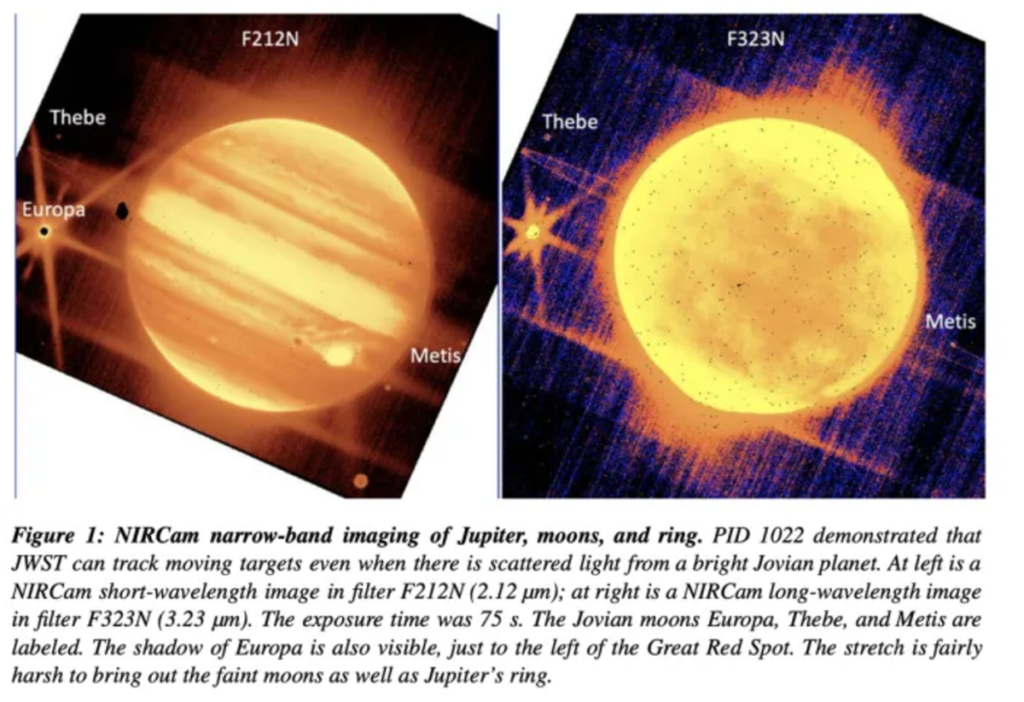 What immediately got my attention was a large dark area just above Jupiter’s atmosphere near Europa. The caption in the NASA image said, “the shadow of Europa is also visible, just to the left of the Giant Red Spot.” However, the dark area was nowhere near the red spot. What was it?

I asked Elena Danaan and Jean Charles Moyen, two contactees with different groups of extraterrestrials, whether any of their sources could explain the dark area. Danaan replied first that Oona, a representative of the Intergalactic Confederation, had a message to share. She publicly released Oona’s message in a July 13 live stream on YouTube. Here’s the complete message of what Oona had to say about the mysterious dark area, along with information about newly arrived space fleets that had parked in the vicinity of Jupiter.

Salutations to who will read this communication I am transmitting now. Here first Altean emissary Oona speaking on behalf of the Intergalactic Confederation, Council of the Twenty-Four.

There are one hundred and thirty-eight motherships part of the Nataru Alliance in your star system named Sol, with their fleets. This number represents several thousands of crafts.

In previous articles (here & here), I discussed the newly arrived motherships from the Intergalactic Confederation, aka the Seeders or Guardians. My most credible source is a current US Army serviceman, JP, who says that he was sent on a covert mission to Jupiter’s moon, Ganymede, where US Space Command has set up facilities to greet and liaise with the newly arrived extraterrestrial visitors.

It’s important to emphasize that JP’s information is not channeled but direct hands-on experience acquired during a classified space mission led by US Space Command. As I’ve previously described, JP is being encouraged to disclose his participation in highly classified missions into space or travel to hidden space arks on Earth by covert operatives. Nevertheless, his immediate Army superiors frown on what they perceive to be his unauthorized disclosures of classified information, thereby putting him in a delicate situation requiring anonymity.

Along with Elena Danaan and JP, other contactees have described being told by their extraterrestrial contacts that newly arrived space fleets have parked in the vicinity of Jupiter. These include Alex Collier, James Gilliland, Jean Charles Moyen, and David Rousseau, all of whom confirmed in interviews that large numbers of extraterrestrial spacecraft had recently arrived.

Going back to the Webb Jupiter image, Oona next explained what it was:

The recently disclosed image of your planet Jupiter displays the cloud of orbital rocks, plus the defense grid of the ships from the Ashtar outpost, plus some of our motherships. The majority of our fleet is behind the planet Jupiter, hidden from your sight. The disclosure of this image is not an error but a move from the Terran Alliance in charge of the program.

Terran instances may name our ships “cold spots”, there is truth. More visuals to come. The plan is on schedule. One step at a time.

We are holding your hand and you must not look back. Instead, look up. In the greater design of the universe, you are already on the other side of the bridge.

Close examination of the darkened area shows that it is not a shadow, as suggested by NASA, but a large dark field orbiting Jupiter just above its atmosphere. A “cloud of orbital rocks” that is part of a defense grid belonging to a floating city controlled by the Ashtar Command, which I’ve previously discussed, along with large motherships parked next to the rocks, is very plausible.

Support for Oona’s observation comes from Moyen, who said that his principal extraterrestrial source, Victor, told him that the dark spot was “a big mothership.”

The James Webb Space Telescope image of Jupiter may provide the first photographic evidence showing some of these spacecraft secretly parked in the vicinity of Jupiter. If Oona is correct about the covert disclosure program that is underway, we can anticipate more images of Jupiter to be released, revealing even more details of the giant spacecraft parked around Jupiter and its moons.

Many thanks to Elena Danaan for permission to include her message from Oona concerning the Webb Space Telescope image of Jupiter.

Video Version of this article is available on YouTube & Rumble.

[Update 7/17/2022 – A high resolution version of the above image showing Jupiter and its moons along with a large dark area is available here. A different filter shows the area in question here.] 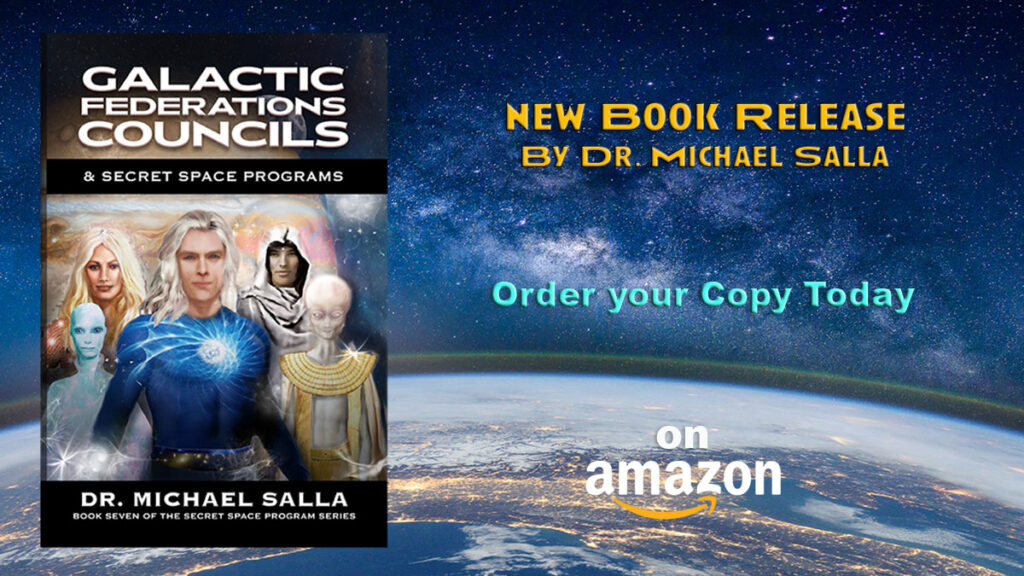