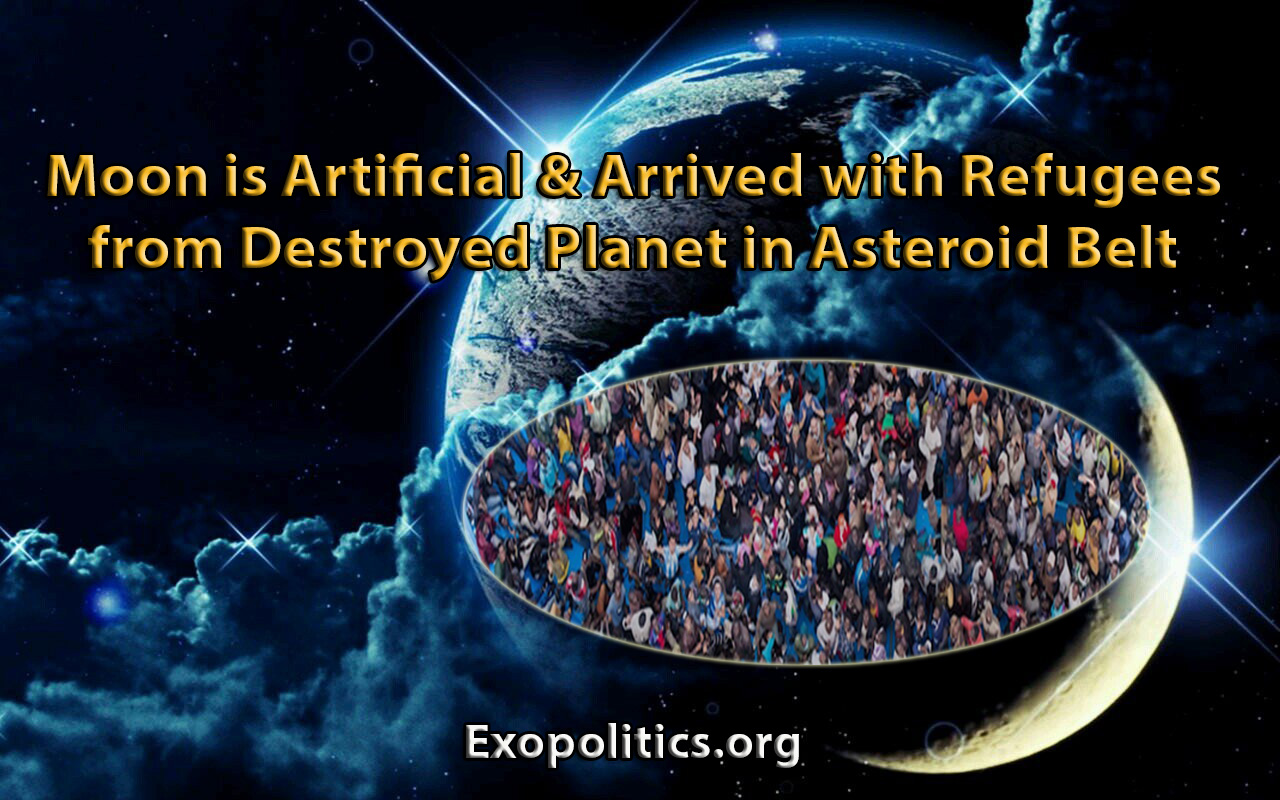 According to secret space program whistleblower Corey Goode, there was once a “Super Earth” in the asteroid belt with human looking giants who were involved in a devastating galactic war that destroyed their planet. Goode claims in yesterday’s episode of Cosmic Disclosure that many of the giants fled the destruction via one of their artificially created moons, which was sent into an orbit around the Earth approximately 500,000 years ago.

Goode says that the smart glass pads he read during his 20 year service with different secret space programs from 1987 to 2007 provided two explanations for the moon’s artificial nature. One was that it was a hollowed out natural moon, and the second was that it was a giant orbiting space station.

Goode then says that waves of refugees from the Super Earth began arriving on Earth during different stages in the period spanning the former planet’s destruction. One of these waves was associated with the arrival of the Moon that was teeming with refugees.

The refugees arrival on Earth created armed conflict with advanced indigenous human groups that had previously escaped into the Earth’s interior from cataclysms, and were helping survivors on the surface rebuild society. In previous episodes, Goode says that these breakaway “Inner Earth” groups date as far back as 18 million years, inhabit vast caverns as large as the U.S. state of Texas, and possess advanced space craft.

The arrival of the Moon with refugees possessing advanced technologies threatened to upset the delicate balance of power that had been achieved on the Earth between the Inner Earth and surface civilizations. There were subsequent military battles between the Inner Earth civilizations, extraterrestrial visitors and the Super Earth refugees on the Moon, according to Goode.

Evidence of these ancient Moon battles can be witnessed today in the form of the remnants of giant crystal domes, huge towers and square structures, which Goode says he directly witnessed while flying over the moon’s surface. Support for Goode’s astounding claim comes from the research of Richard Hoagland who has conducted extensive digital analysis of much NASA lunar imagery, which he concluded revealed the remnants of giant glass/crystal structures all over the Moon:

Goode’s incredible claims about the history of the Moon are part of a two part series of Cosmic Disclosure episodes on a Super Earth that once orbited the sun in the region of the asteroid belt. The previous episode discussed how Mars was also once a moon orbiting the Super Earth.

Mars at the time had sufficient water and oxygen rich atmosphere to host a large population on its surface. The events that led to the Super Earth’s destruction also wiped out much of the surface population on Mars, and removed the bulk of its atmosphere according to what Goode read on the smart glass pads. The force of the Super Earth’s destruction propelled Mars into its present planetary orbit.

Goode and Wilcock’s discussion of the destruction of a Super Earth reveals astonishing historical facts that are very helpful for understanding our real galactic history. So was there a Super Earth that was destroyed in a titanic battle, which resulted in one of its moons being sent into Earth orbit, and another being sent into its present orbit as the planet Mars?

The first major scientist to seriously research the possibility that the asteroid belt is the remains of a former planet is Dr. Thomas Van Flandern, who was the chief astronomer at the U.S. Naval Observatory. He wrote several academic papers on what he described as the Exploded Planet Hypothesis, which suggested that several asteroid belts in our solar system arose from the destruction of planets stretching all the way back to the beginning of the solar system:

Putting all this evidence together, we have strong hints for two original planets near what is now the main asteroid belt: hypothetical “Planet V” and “Planet K”. These were probably gas giant planets with moons of significant size, such as Mars, before they exploded. We have hints of two more asteroid belts, probably from the explosions of two more planets (“Planet T” and “Planet X”) beyond Neptune. And we have hints for two extra-large gas giant planets, “Planet A” and “Planet B”, that exploded back near the solar system beginning.

Van Flandern elaborated on his proposal that Mars was once a moon of a destroyed planet in the asteroid belt:

The above summarizes evidence that Mars was not an original planet, but rather a moon of a now-exploded planet occupying that approximate orbit. Many of these points are the expected consequences of having a massive planet blow up nearby, thereby blasting the facing hemisphere and leaving the shielded hemisphere relatively unscathed. Especially significant in this regard is the fact that half of Mars is saturated with craters, and half is only sparsely cratered. Moreover, the crustal thickness has apparently been augmented over one hemisphere by up to 20 km or so, gradually tapering off near the hemisphere boundaries.

Van Flandern’s Exploded Planet Hypothesis lends scientific support to Goode’s claims about both the Moon and Mars being two former moons of a Super Earth.

If Goode is correct, then prior to the Moon’s arrival approximately 500,000 years ago, the Earth had no moon. Indeed, there is historical evidence that the Moon was a late arrival to the Earth. Immanuel Velikovsky found numerous historical references to pre-lunar cultures on Earth, some of which he described as follows:

The period when the Earth was Moonless is probably the most remote recollection of mankind. Democritus and Anaxagoras taught that there was a time when the Earth was without the Moon. Aristotle wrote that Arcadia in Greece, before being inhabited by the Hellenes, had a population of Pelasgians, and that these aborigines occupied the land already before there was a moon in the sky above the Earth; for this reason they were called Proselenes.
Apollonius of Rhodes mentioned the time “when not all the orbs were yet in the heavens, before the Danai and Deukalion races came into existence, and only the Arcadians lived, of whom it is said that they dwelt on mountains and fed on acorns, before there was a moon.”
Plutarch wrote in The Roman Questions: “There were Arcadians of Evander’s following, the so-called pre-Lunar people.”

Goode’s revelations about a Super Earth and the cataclysmic events surrounding its destruction are shocking. If accurate, as the research of Dr. Van Flandern and additional independent evidence suggests so far, then Goode has opened the door to better understanding the real history of our Earth, Moon, Mars and the solar system more generally.

Goode and Wilcock’s Cosmic Disclosure series continues to surprise and enlighten as it discloses many aspects of galactic history discovered by secret space programs, which are for the first time allowing much of this information to be released to the general public through Goode and other whistleblowers.