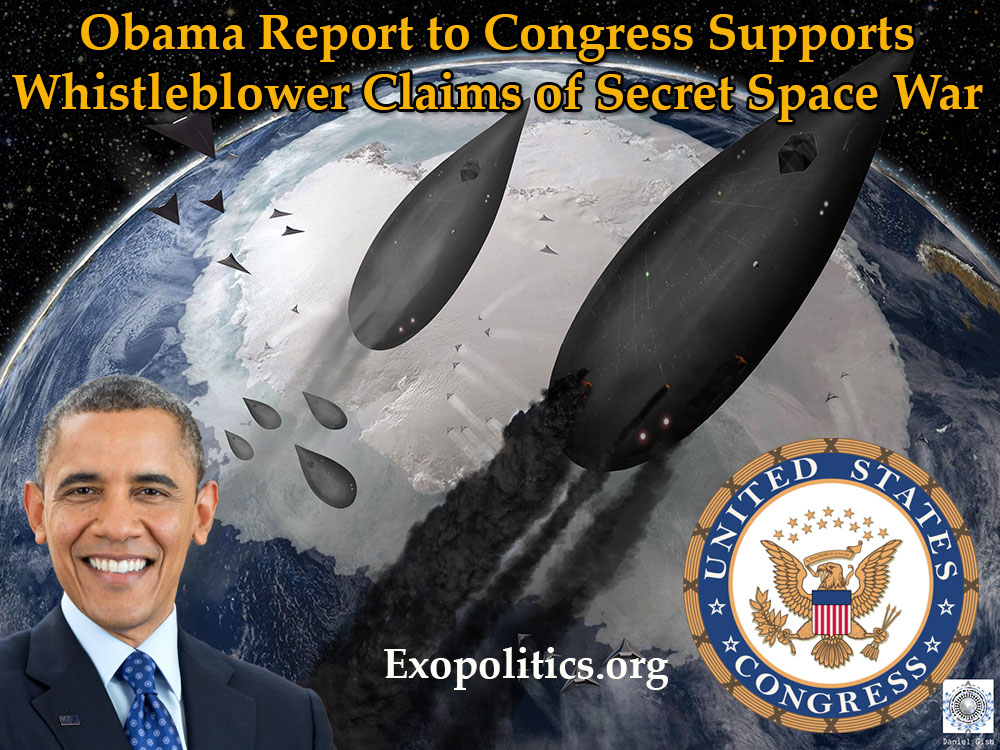 On May 26, President Barack Obama issued a report to the U.S. Congress about an interagency effort to develop an “integrated policy” to deter potential enemies in Space. Obama’s “Space Report” gives credence to secret space program whistleblowers such as Corey Goode, who claim that battles have been fought between rival secret space programs in 2015, with the most recent occurring over Antarctica in April 2016.

In a letter released through the White House Press Secretary discussing the report along with a classified Annex, Obama said:

Obama’s letter said the report was issued to comply with “section 1613 of the National Defense Authorization Act for Fiscal Year 2016″, which he signed into law on November 25, 2015.

The Act was first submitted as a Bill on May 14, 2015, and had the following section to which Obama was directly responding in his May 26, 2016, letter:

Requires the President to establish an interagency process to develop a policy to deter adversaries in space.

Obama’s letter refers to “a multi-year effort and commitment across all departments and agencies.” What provides important context for his letter are reports of alleged battles in space between different secret space programs, which began in early 2015 according to Goode.

Goode’s first public reference to battles in space was in an email interview released on May 30, 2015 where he discussed recent military conflict between different secret space programs [SSP] and their respective extraterrestrial allies both on Earth and in deep space:

Before the breakdown in the overall relations between the factions that were once united through the “Secret Earth Governments” (and their “Syndicates” known as the Cabal/Illuminati and various other Secret Societies), their Controllers (Draco Federation Royals and Ancient Earth/Human Break Away Civilizations that have deceived many and presented themselves as ET’s from various Star Systems) there has been quite a lot of chaos among these groups which has resulted in them turning on each other. This has led to conflict in various underground/undersea networked facilities that have been responsible for some of the Earth Quakes in recent months that have been occurring across the Planet Earth as well as some incidents on Mars and other bodies in the Sol System…

Goode went on to describe the result of defections to a SSP Alliance formed with the U.S. Navy’s Solar Warden program, which led to a surge in military battles, especially on Mars leading to many deaths at secret colonies:

Over the last 6 months there have also been some defections of assets from the Cabal controlled ICC [Interplanetary Corporate Conglomerate] Secret Space Program, remnants of the Dark Fleet (which is not a Draco Fleet but a Human SSP Fleet that serves alongside the Draco Alliance) that were not caught outside of the Outer Barrier as well as various other Military Black Ops SSP Program Members. Some of them brought with them time critical and actionable intelligence that was acted on by some of the SSP Alliance Leadership and their new allies without bringing it to the SSP Alliance Council. This resulted in Two Massive Attacks that caused large numbers of innocent deaths. Those who took part in what the Blue Avians called “Atrocities” were unapologetic and stated that it was the cost of war but the collateral damage was regrettable.

It is very significant that Goode’s May 30, 2015 revelations of recent space battles overlapped with the introduction into the U.S. Congress of the original bill for the National Defense Authorization Act for Fiscal Year 2016, which requested Obama to: “establish an interagency process to develop a policy to deter adversaries in space.”

It’s worth emphasizing here that at the same time Goode was revealing the military hostilities that had just occurred both on Earth and in Space between different secret space programs, the U.S. Congress was authorizing President Obama to respond to future scenarios not dissimilar to what Goode was saying had already occurred in early 2015.

More recently, Goode claims that he received a briefing about a battle fought over Antarctic skies in April 2016, involving an attack on six large “teardrop shaped” cruisers by dozens of smaller “chevron shaped” space craft. He has provided graphic illustrations of both the Antarctic space battle, and of the location of the six bases from which the alleged cruisers launched. Goode was uncertain over the origin of the chevron shaped space craft, and referred to speculation among his contacts that they belonged to an “Earth Alliance”, comprising “White Hats” from different national militaries such as the BRICS nations of Russia, India, China and Brazil.

Goode also said that he was physically taken on a tour of these hidden Antarctic facilities, which he says are jointly run by the Interplanetary Corporate Conglomerate (ICC) and the Dark Fleet. He stated that the six space cruisers belonged to Dark Fleet, which dates its origin to breakaway Nazi groups in Antarctica and South America.

They were carrying Nazi-aligned global elites that had fled to South America and Antarctica over the last six months, as Goode explained in a personal briefing to me on June 15. On June 18 – 19, David Wilcock gave his analysis of the informal briefings he had received earlier from Goode, and speculated that the attacking chevron craft belonged to members of the U.S. Military Industrial Complex (MIC):

Corey’s people in the SSP Alliance did not know who built the “chevrons”. It appeared to be one of the Earth-based “lower level SSP” groups. In order to give them honor and respect, I will refer to these Earth-based space program groups as the military-industrial complex, or MIC.

Wilcock says that he spoke with another whistleblower, Dr. Pete Peterson, who said that the US based MIC was given these advanced technologies by defectors from corporate controlled secret space programs:

Peterson knew all about these triangle-shaped craft when I discussed it with him on the phone. The MIC are very proud of their new weapon. It is very likely that the MIC got this technology from Alliance defectors from the space-based ICC, or Interplanetary Corporate Conglomerate.

The ICC is a faction of the SSP that started out as a part of the MIC. The ICC then became far more powerful and splintered off in various off-planet colonies. This group is completely self-sufficient, never needs money or supplies of any kind from Earth, and is effectively a breakaway civilization. The craft piloted by the earth-based MIC were nowhere near as advanced as those of the ICC or Dark Fleet, but all of that has changed now.

In June 2009, Petersen had first shared his testimony on a leading whistleblower site Project Camelot, and has continued to privately brief Wilcock.

If Goode and Petersen are correct, then it would appear that Obama’s letter referring to a “multi-year effort and commitment across all departments and agencies,” to deal with space adversaries, is not referring to a hypothetical future scenario, but is dealing with present real time contingencies involving one or more secret space programs and their extraterrestrial allies.

Furthermore, Goode claims that he was abducted on three occasions over a six week period during the months of January and February by an interagency military group with its own secret space assets, which was intent on gathering intelligence on the accuracy of Goode’s earlier revelations.

In a previous article, I discussed Goode’s June 15 personal briefing where he said that the National Reconnaissance Office, USAF Space Command and Defense Intelligence Agency (DIA) were agencies very likely involved in his military abductions.

They are part of what Goode has previously described as a “lower level” secret space program, largely unaware of the more highly classified space programs operating in deep space with kilometers long space carriers and cruisers as confirmed by former aerospace engineer William Tompkins.

While at a Douglas Aviation Company think tank called Advanced Design, Tompkins says that he personally designed the first space battle groups in the 1950’s, which eventually began deployment in 1984 as the Navy’s Solar Warden Space program.

The significance of Goode’s January/February military abductions by the NRO, USAF Space Command and DIA is that these are currently gaining intelligence on the operations and technologies used in more advanced space programs, which are completely independent of the regular chain of military command, and Presidential oversight. These are almost certainly the same agencies involved in Obama’s “interagency process to develop a policy to deter adversaries in space.”

Consequently, if Goode is correctly reporting his experiences, then it would appear that his military abductions were part of President Obama’s new interagency initiative to prepare for future space battles involving unnamed adversaries.

Obama’s Space Report, and section 1613 of the National Defense Authorization Act of 2016, provide important circumstantial support to Goode’s claims that military hostilities between rival secret space programs are currently occurring. These hostilities have stimulated a coordinated response by select military departments, agencies and corporations within the US Military Industrial Complex, and their international allies – what Goode loosely describes as the “Earth Alliance”, to deal with “adversaries” who will likely be revealed in what has been predicted to be a limited disclosure announcement.