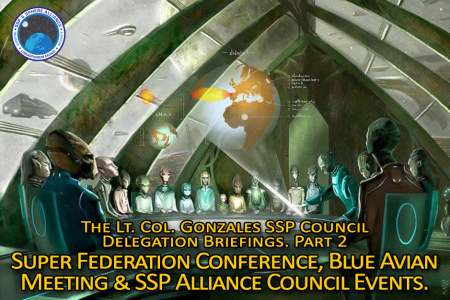 Over the last four months, incredible claims have been made that diplomatic meetings have been occurring where delegates from secret space programs and extraterrestrial civilizations have been negotiating how much information about their existence will be disclosed to Earth’s population. The claims have been made by Corey Goode (aka GoodeETxSG) who says he has been a delegate to some of these meetings after being appointed to represent a new group of extraterrestrial visitors to our solar system called the Sphere Being Alliance. Goode’s incredible claims have just received a boost in credibility with a military whistleblower, using the pseudonym ‘Lt Col Gonzales’, authorizing Goode to release summaries of two meetings he recently attended while Goode was absent.

While the content of the most recent meeting attended by Gonzales reveals major new developments, its deeper significance is that there are now two eyewitnesses reporting about the secret space program meetings first revealed by Goode back in March 2015. While Gonzales has decided to maintain his anonymity, the fact that he has approved summaries of two verbal briefings to Goode being released is very significant. It provides a second perspective on the secret “galactic diplomacy” meetings allegedly being conducted, and fresh insight into the different groups, alliances, and processes involved in these meetings.

The most recent briefing by Gonzales, as relayed through Goode, is about a meeting he attended approximately a week ago involving delegates of up to 100 different groups of human looking extraterrestrials that is called the “Super Federation Council”. Gonzales began by telling Goode how it felt to attend one of these meetings for the first time as an actual delegate as opposed to being in an advisory role where one is not given access to the necessary translator technology to understand the proceedings: “It is something to finally understand what all is going on at one of those Super Federation conferences, isn’t it?”

Goode summarized what Gonzales told him after arriving at the location of the meeting in the vicinity of our Solar System’s gas giants:

He went on to tell me about the arrival at the Federation Council Meeting Facility. This is a station that is in a secure temporal bubble out around the orbits of Jupiter and Saturn. When you enter into the temporal bubble, you can see the station and docking ports for all of the other delegates floating freely in the middle of a completely pitch-black bubble. You cannot see the sun, planets or stars from inside this space/time anomaly. Gonzales and the crew docked, went through a security scan for AI and other outside technologies, and were allowed in.

Goode described the difference between being a delegate as opposed to being in an advisory position such as an Intuitive Empath (IE), a position Goode claims to have occupied during his secret space program service from 1987 to 2007:

Gonzales said he was immediately treated like he mattered this time, as opposed to last time when the other delegates and support staff only interfaced with me — and ignored the IEs and him. He said it was all very polite, with respectful communications and treatment from everyone the entire walk down the passage from the space docks to the meeting hall. Gonzales and the IEs could feel a different energy in the air that was more one of anticipation, instead of the mixture of anxiety and agitation from the previous times.

Gonzales then explained the main subject of the meeting which was to relax a planetary quarantine that was endangering extraterrestrials trapped on Earth that were conducting humanitarian or scientific missions. Goode has earlier explained how the Earth quarantine was created:

The Sphere Alliance has setup 2 “Energy Barriers” that cannot be penetrated by any beings or technology (be they 3/4D or 4/5D beings). One is the “Outer Barrier” which completely closes off the entire Sol System (including Gate/Portal travel) from travel into or out of the system. The other is a “Barrier” that surrounds the Earth. It keeps every Being and Craft/Technology that was either On Earth or in Near Earth Orbit from leaving a certain distance from the Planet.

The Secret Space Program Alliance, to which Gonzales was the delegate, was given superior technology by the newly arrived Sphere Being Alliance to monitor and enforce the Earth quarantine:

There had been dozens of petitions by ETs who wanted to retrieve their teams who were on expedition missions to Earth to study the planet’s oceans, jungles and other aspects of nature. These ETs were completely uninterested in interacting or meddling in the affairs of humanity, or with interacting with other ET Groups who were present in our Sol System. They were positive groups who were only interested in the planet’s biosphere. Since being trapped on Earth, many of these smaller expeditionary teams had been running out of needed supplies and had begun to be hunted down by human and negative ET Groups.

Gonzales reported that the Super Federation Council: “normally had 40 to 60 groups in attendance. Now it had well over 100 groups all massed together in the auditorium.” When Gonzales stepped to the podium:

He announced that the Earth’s barrier was going to be relaxed, and that these groups would be allowed to return back to their support teams who were here in the Sol System, trapped inside the outer barrier. The Earth’s traffic would go back to a strict grid authorization system – an air traffic control-type system — and would be enforced by the more advanced SSP Alliance vessels.

Goode describes how Gonzales felt “relief in the room as he finished his short message and presentation.” Gonzales went on to say:

Once again, as in the previous meetings, group after group took turns taking the stage to make short statements of what they had contributed to the Earth, humanity and the Grand Experiment.

Goode shared much more information in his report about the briefing Gonzales gave him on a range of topics related to efforts to disclose the truth about secret space programs and extraterrestrial life to the general public. Perhaps most significant given recent international news is what Gonzales had to say about hacking incidents involving personnel files of major governments:

This is when he mentioned what was going on with a few EU countries financially, and the recent round of high-level government hacks that have occurred – not just to US databases, but to the entire Western World. Gonzales stated that these hacks were incredibly pervasive — and that they had also hacked the Secret Earth Government and syndicates’ “Dark-Net”. Gonzales said that very little of what was taken has been reported in the MSM. Nonetheless, a stunning amount of intelligence was obtained and compiled into the database we had so far that has been contributed to by several parties.

Such hacking claims are consistent with recent reports that the hacking of the U.S. Office of Personnel Management involved a staggering 25 million background security files, not just the four million originally reported. Furthermore, Wikileaks has recently released files about the NSA spying on different European national leaders, as well as files from an Italian company selling hacking software to national governments wanting to spy on citizens, corporations or other entities.

While the content of Goode’s report about Gonzales briefing contains incredible claims, arguably what is most significant is that it provides another eyewitness account of secret meetings involving different secret space programs and extraterrestrial life. Goode has been providing his own eyewitness account since March of these meetings. Now we have Gonzales sharing his own eyewitness testimony for the two most recent meetings, albeit through Goode.

The summaries of Gonzales two briefings released on July 9 and July 13 are an important step forward in confirming Goode’s incredible claims. It’s also likely that in the future Gonzales identity will be independently confirmed, and more will be revealed about his background. The next time Gonzales gives a briefing, however, he needs to have it transcribed verbatim in part or in whole. This will help greatly in investigating and confirming Corey Goode’s claims, and better prepare the general public for the “full disclosure event” being discussed at secret space program meetings.

[Note: Corey Goode requires public support to continue his disclosures. You can help by visiting his website to donate, purchase products or register through this link for his upcoming Gaiam TV interviews.  A Resource Page listing interviews, articles and more reports about Corey Goode’s revelations is available here].

[Update 7/15/15: In an earlier version of this article, it was mistakenly stated that the Earth quarantine had been set up by the Secret Space Program Alliance. Goode has instead claimed the Sphere Being Alliance had set up the quarantine and supplied the SSP Alliance with superior technology to monitor and enforce the quarantine. The article was revised accordingly. Thanks to Marco Monahan for pointing out the error]