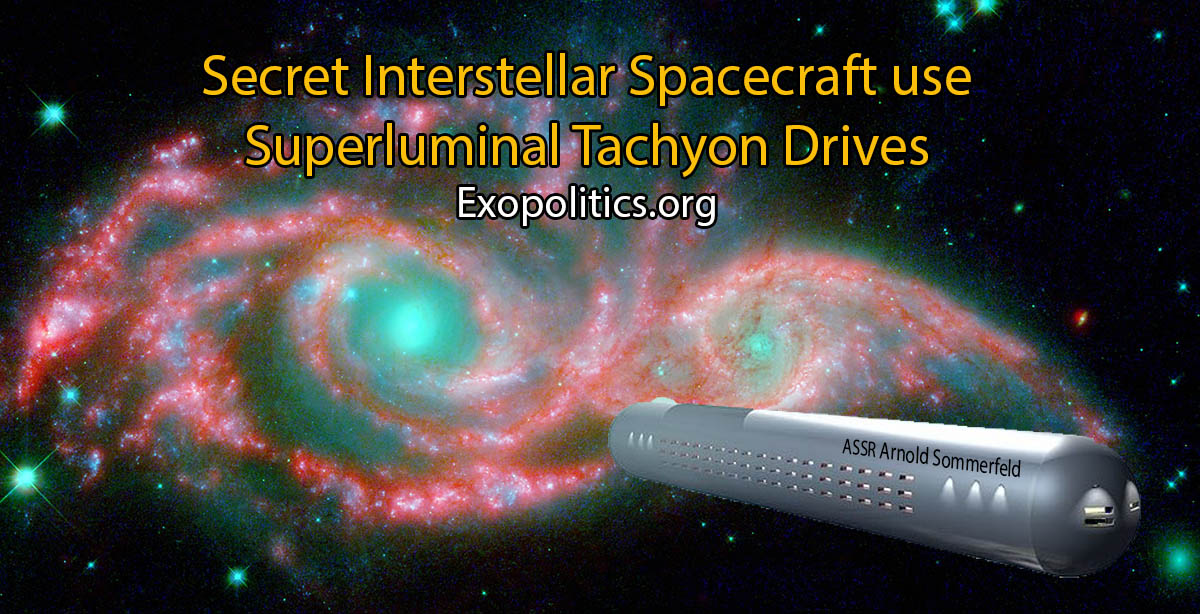 A fleet of spacecraft have been secretly constructed using tachyon drives that are capable of interstellar travel at superluminal speeds. This astounding conclusion emerges from the disclosures of a whistleblower claiming to have served for 20 years on several secret space programs. Corey Goode says he served for six years on a spacecraft cable of interstellar travel that was named after a famous German theoretical physicist, who first proposed the existence of superluminal particles later named tachyons.

In an April 4 email interview, Goode described how he was recruited to serve in a secret space program called Solar Warden. that was initially set up by the US Navy:  “Solar Warden was indeed a heavily Navy program in the beginning with Air Force involvement later on.” He went on to describe Solar Warden as possessing both military and scientific research spacecraft, and says he served on one of the latter:

I was only assigned to the research vessel [ASSR “ISRV”– (Auxiliary Specialized Space Research) Interstellar-Class Vessel, Arnold Sommerfeld] for a little over 6 years.

It appears odd that Goode served on a spacecraft belonging to an alleged Solar Warden program named after Arnold Sommerfeld, a German theoretical physicist who lived from 1868 to 1951.  Clearly Sommerfeld would have had to achieve something quite remarkable to have a ship posthumously named after him in a secret U.S. Navy created space program.

Arnold Sommerfeld is known for having supervised more Noble prize winners in physics than any other person in history. Quite a remarkable achievement but certainly not enough to have an interstellar class spacecraft belonging to another nation named after you. Sommerfeld is also known as the first person to propose the existence of superluminal particles that were later named “tachyons”. Here is a summary of the development of tachyon particles in theoretical physics:

Tachyons are a putative class of particles which [are] able to travel faster than the speed of light. Tachyons were first proposed by physicist Arnold Sommerfeld, and named by Gerald Feinberg. The word tachyon derives from the Greek tachus, meaning “speedy.” Tachyons have the strange properties that, when they lose energy, they gain speed. Consequently, when tachyons gain energy, they slow down. The slowest speed possible for tachyons is the speed of light.

In 1910 Albert Einstein and Arnold Sommerfeld conducted a thought experiment involving a theoretical device that was later called the “tachyonic antitelephone”:

A tachyonic antitelephone is a hypothetical device in theoretical physics that could be used to send signals into one’s own past. Albert Einstein in 1907[1] presented a thought experiment of how faster-than-light signals can lead to a paradox of causality, which was described by Einstein and Arnold Sommerfeld in 1910 as a means “to telegraph into the past”.”

A spacecraft capable of using a tachyon device would be able to achieve superluminal speeds “to telegraph into the past.” This means that a Tachyon drive based on the Einstein-Sommerfeld idea of a “tachyonic antitelephone” would make interstellar flight possible. Spacecraft could travel vast distances measured in light years and essentially “telegraph into the past” to a time shortly before it left for its destination. This is nicely illustrated in the following limerick:

There was a young lady named Bright,

Whose speed was far faster than light.

She went out one day,

In a relative way,

And returned the previous night!

While most physicists believe that “faster-than-light particles cannot exist because they are not consistent with the known laws of physics,” Goode’s revelation suggests otherwise. His alleged service on an interstellar capable spacecraft named after Arnold Sommerfeld suggests that tachyon drive engines have been developed and are currently being used.

There is a significant body of circumstantial evidence supporting Goode’s eyewitness testimony. Furthermore, a second eyewitness has recently allowed summaries of his own experiences with secret space programs to be released, thereby lending additional support to Goode’s incredible claims. All this suggests that Goode’s revelation that he served on the “ASSR Arnold Sommerfeld” is compelling evidence that tachyon(ic antitelephone) drives have been developed for and used in a highly classified class of interstellar spacecraft yet to be revealed to the world.