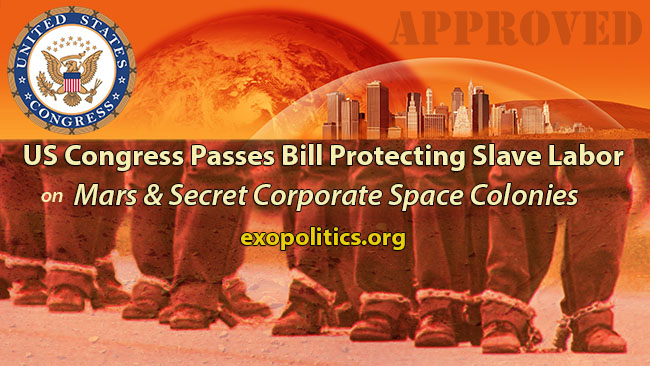 On November 16, the U.S. House of Representatives joined the Senate in passing a bill that provides legal protection for space mining conducted by U.S. based corporations that establish off-world operations. While most Congressional members that passed H.R.2262 – U.S. Commercial Space Launch Competitiveness Act may have done so with the impression that they would protect the rights of U.S. companies in future space mining missions, they instead have provided legal protection to corporations that have been secretly conducting such operations for decades.

The passage of the “U.S. Commercial Space Launch Competitiveness Act” is significant due to recent whistleblower claims that off-world space mining by U.S. affiliated corporations have been using slave labor on Mars and elsewhere in our solar system. More recently, it has been claimed that these mining operations and associated bases, began as a result of cooperation between German Secret Societies and the U.S. military industrial complex, a relationship that dates back to the late 1950s.

If these claims are true, then U.S. corporations have been involved in slave labor practices on Mars and elsewhere, which originated with the policies of Nazi Germany. Clark McClelland, a veteran space engineer who worked for NASA or its contractors for a total of 34 years, claims he saw Hans Kammler, the same Nazi SS official involved in implementing slave labor practices for highly advanced secret projects in Germany, at the Kennedy Space Center in the early 1960s.

McCelland’s testimony supports another whistleblower, Corey Goode, who claims secret agreements had been reached with the Eisenhower administration as a result of flyovers of Washington D.C., by German flying saucers in 1952. McClelland’s and Goode’s testimonies about Nazi and German infiltration of the U.S. space program are investigated in the recent book Insiders Reveal Secret Space Programs and Extraterrestrial Alliances.

The relevant section of the “U.S. Commercial Space Launch Competitiveness Act,” dealing with protecting space mining was originally submitted on March 19 to the U.S. Congress as a separate bill titled “H.R.1508: Space Resource Exploration and Utilization Act of 2015.”

Rather than being voted on as a separate bill, the “Space Resource Exploration and Utilization Act” was instead incorporated into the larger bill, “H.R.2262 – U.S. Commercial Space Launch Competitiveness Act.” It was the latter bill that was passed by the House of Representatives on November 17, and earlier by the U.S. Senate on November 10.

Title IV of the U.S. Commercial Space Launch Competitiveness Act (aka Space Resource Exploration and Utilization Act of 2015) protects the rights of mining companies willing to invest significant financial resources in future space exploration. If, for example, a mining company establishes a base on Mars, then it would have the right to exploit the resources of Mars while being protected under U.S. federal law.

Here is what the U.S. Commercial Space Launch Competitiveness Act has to say in section “51302. Commercial exploration and commercial recovery”:

(a) IN GENERAL – The President, acting through appropriate Federal agencies, shall—

(1)       facilitate the commercial exploration and utilization of space resources to meet national needs;

This clause raises the possibility that under U.S. “national needs” the President of the United States can provide resources and assistance to mining companies to establish off-world bases and mining. There is nothing particularly alarming here at the prospect of companies such as Elon Musk’s SpaceX being given assistance to plan future Mars missions that establish mining bases to fund themselves.

The next clause of the U.S. Commercial Space Launch Competitiveness Act does raise some disturbing issues however:

What exactly does “discourage government barriers” mean? This clause could be used to argue against any future government regulations as unnecessary and causing significant impediment to profitable mining operations.

For example, if a mining company was to exploit workers in slave-labor like conditions, rather than federal regulators imposing U.S. labor standards, the oppressed workers would be left hanging to seek a resolution of the corporate entity itself.

“(g) Federal jurisdiction.—Any claim by a third party or space flight participant for death, bodily injury, or property damage or loss resulting from an activity carried out under the license shall be the exclusive jurisdiction of the Federal courts.”

Basically, this means that any human rights issues arising in the mining operations of corporations with off-world bases would have to be addressed through U.S. federal courts.

The U.S. Commercial Space Launch Competitiveness Act raises some very troubling legal issues about future mining operations by U.S. based corporations. However, rather than a hypothetical legal problem to be debated by space law attorneys, there is testimonial evidence that space mining operations already secretly exist. Furthermore, it has been claimed that these mining operations use slave labor on Mars and other locations in the solar system.

According to alleged eyewitness testimony, an inspection of a Mars mining and manufacturing facility was conducted on June 20, 2015. In a detailed report written two days later, Corey Goode claims that he along with a “Lt Col Gonzales” (a pseudonym) were given an official tour of a facility owned by a corporation called the “Interplanetary Corporate Conglomerate” (ICC). The inspection was done to investigate claims of slave labor being used at ICC facilities.

According to Goode, a former ICC employee had defected to a rival space program called the “Secret Space Program (SSP) Alliance”, and was willing to testify in future legal proceedings against responsible corporate officials.

A Council heading the SSP Alliance made the necessary arrangements for Goode and Gonzales to travel to Mars and inspect the ICC facility. Based on what Goode and Gonzales directly witnessed, there is testimonial evidence that slave labor is currently being used on Mars to mine and manufacture products for the ICC.

It has been claimed that the findings of investigations by the SSP Alliance, against corporate and other abuses in space, will submitted in planned “crimes against humanity” trials.

If Goode’s report is accurate, then the effect of the U.S. Commercial Space Launch Competitiveness Act would be to give U.S. federal legal protection to the owners, managers and personnel of corporations currently using slave labor in off-world operations. Investigations by international human rights organizations, including the International Criminal Court, and the alleged SSP Alliance legal proceedings, would be effectively neutralized.

Currently, the House’s Space Resource Exploration and Utilization Act awaits reconciliation with its Senate version before being passed on to President Obama for his signature and ratification. This is expected to happen quickly with little debate since the general public, mass media, and perhaps even Obama himself, are unaware of the secret decades-long involvement of U.S. corporations in off-world mining operations.

It appears more than coincidental that at the same time as accusations of slave labor being used at off-world mining operations are being secretly investigated for possible criminal prosecution, that the U.S. Congress has passed legislation that would effectively provide legal protection to corporate officials responsible for crimes against humanity in space.