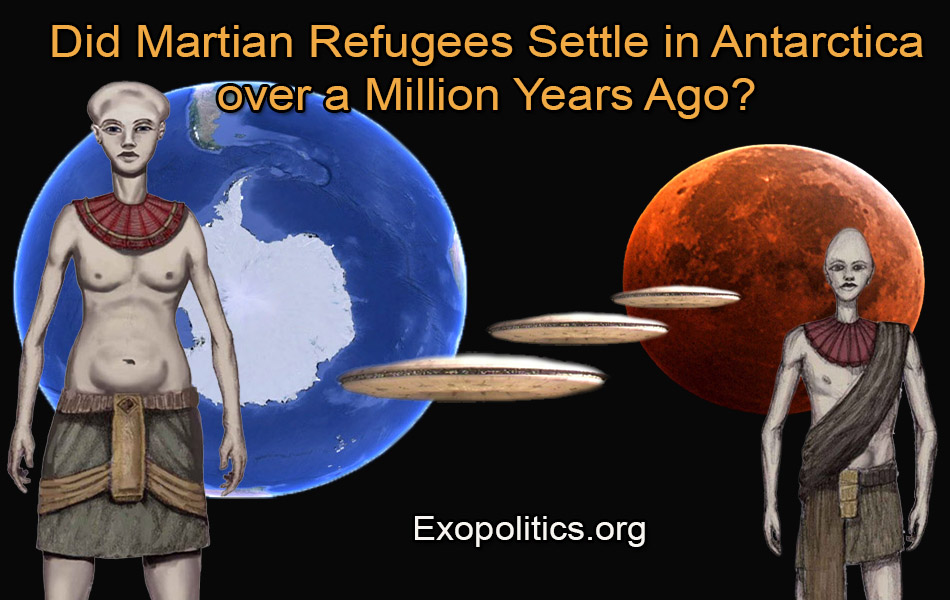 Did Martian Refugees Settle in Antarctica over a Million Years Ago?

The remote viewing of Mars revealed in a May 22, 1984 CIA document gives details of a planet wide-catastrophe that led to many refugees leaving in spacecraft to safer locations over a million years ago. This leads to the intriguing possibility that a flash-frozen civilization recently found in Antarctica with cannibalized spacecraft nearby was the remnants of a colony originally established by Martian refugees.

Such a scenario is consistent with the claims of Secret Space Program whistleblower Corey Goode who says that extraterrestrial refugees have been finding sanctuary on Earth for at least five hundred thousand years, and that preparations are currently underway to officially disclose excavations of a flash-frozen Antarctica civilization.

Back in March 28, 2016, Goode described various insider sources that had told him about the influx of refugees from other planets during Earth’s history:

And it seems that more recent information that I’ve gotten is telling us that the Earth received refugees, at different points in history, from a couple of different planets, at least, in our solar system where the planets failed and inhabitants left and came to Earth as refugees.

Goode said that Mars was one of the planets from which the refugees originated. The Martians were highly advanced technologically with antigravity spacecraft. They engaged in aggressive warfare that led to planetary catastrophe and refugees leaving for Earth. Goode relates what he was told by inhabitants of the “Inner Earth”:

And the people in the Inner Earth Council stated that the different inhabitants of the planets in our solar system were extremely advanced technologically and extremely aggressive, and that they destroyed their civilizations and had to be relocated here as refugees by other ET races that came in.

According to Goode, Mars in particular was hit by a series of environmental catastrophes that were related to devastating wars with the inhabitants of a nearby “Super Earth”, around which both Mars and our current Moon orbited up to 500,000 years ago. The “Super Earth” orbited the sun in the area of the asteroid belt as it exists today between Mars and Jupiter.

The events that led to the Super Earth’s destruction also wiped out much of the surface population on Mars, and removed the bulk of its atmosphere according to what Goode read on “smart glass pads”, which he had access to during his 20 year secret space program service.

It was postulated that Mars was most likely a moon of that Super Earth, and that it was damaged heavily on one side by massive impacts. And that most likely also stripped away its main atmosphere at the time, and it never recovered.

The force of the Super Earth’s destruction propelled Mars into its present planetary orbit.

So was there a Super Earth that was destroyed in a titanic battle, which resulted in one of its moons being sent into Earth orbit, and another being sent into its present orbit as the planet Mars?

The first major scientist to seriously research the possibility that the asteroid belt is the remains of a former planet is Dr. Thomas Van Flandern, who was the chief astronomer at the U.S. Naval Observatory. He wrote several academic papers on what he described as the “Exploded Planet Hypothesis”, which suggested that the main asteroid belt in our solar system arose from the destruction of a large planet around which Mars once orbited:

Putting all this evidence together, we have strong hints for two original planets near what is now the main asteroid belt: hypothetical “Planet V” and “Planet K”. These were probably gas giant planets with moons of significant size, such as Mars, before they exploded… The above summarizes evidence that Mars was not an original planet, but rather a moon of a now-exploded planet occupying that approximate orbit. Many of these points are the expected consequences of having a massive planet blow up nearby, thereby blasting the facing hemisphere and leaving the shielded hemisphere relatively unscathed. Especially significant in this regard is the fact that half of Mars is saturated with craters, and half is only sparsely cratered.

Van Flandern’s Exploded Planet Hypothesis lends scientific support to Goode’s claims about both the Moon and Mars being two former moons of a Super Earth. The CIA’s remote viewer’s claims of the history of Mars is therefore supported to varying extents by both Goode and Van Flandern’s information.

The remote viewer, as discussed in part one, described a planet with violent storms and volcanic activity that was very green. This certainly sounds like Earth, which at the time was likely the only planet in our solar system that would fit such a description. This leads to the question of whether the escaping Martians established colonies on Earth, at least one of which was in Antarctica.

In the remote viewers’ description of Mars, he described them as very tall and thin, and also possessing spacecraft used to transport refugees to the safe location – Earth. This is consistent with what Goode claims to have encountered when he was taken to Antarctica in early January 2017 to see first-hand what was being secretly excavated.

In a January 24 private briefing, Goode confirmed his earlier reports about a “Pre-Adamite civilization” found flash-frozen in Antarctica which was very tall and thin. He described three 30 mile long oval-shaped spacecraft nearby that appeared to have been cannibalized.

Such large ships would have been ideal space arks carrying many thousands of fleeing Martians as described by the remote viewer.

In earlier interviews, Goode described being taken into the interior of Antarctica, well under two miles of ice, and witnessed that it was volcanically very active, and that abundant thermal energy was available to be used as a power source. In the following graphic illustration of what he witnessed at a secret Antarctica base, the steam vents show the intense thermal energy used as a power source.

Goode’s description of continued volcanic activity in Antarctica  is supported by abundant scientific evidence. For example, on February 19, an NPR report discussed NASA scientists conducting experiments around Mount Erebus due to flowing lava under its icy exterior, which they believe is similar to what is likely to be encountered by NASA probes on the moons of Jupiter and Saturn.

Also, a second volcano was discovered under half a mile of Antarctic ice which is also still active and can erupt at any time.

Goode’s accounts of what he witnessed in Antarctica during separate visits is consistent with the scenario described by the CIA’s remote viewer. The Martians had to flee their dying world on spacecraft to another planet – Earth  – that was volcanically very active at the time. Apparently, Antarctica, if it was chosen as a safe location for a colony of the refugee Martians, was located in a more tropical location that was both very green and volcanically active approximately one million years ago.

The descendants of the Martian refugees living in Antarctica were apparently caught off-guard by a sudden “pole shift” that happened approximately 12,000 years ago and led to them being flash-frozen.

Goode has said that major announcements about discoveries in Antarctica are forthcoming which are expected to release some but not all of the truth about the discovered flash frozen civilization. His claim is supported by internet mining expert Cliff High whose “predictive linguistics” model led him to conclude in January that major announcements about Antarctic discoveries are forthcoming.

If refugee Martians did flee to Earth a million years ago and settled in Antarctica, official disclosure of these events would revolutionize our understanding of world history. The digital release of declassified CIA documents detailing remote viewing experiments do contribute in an incremental way to the disclosure process. The truth about historic events in Antarctica would help significantly in our global civilization avoiding a similar fate to what prior civilizations have encountered on Earth and elsewhere in our solar system.