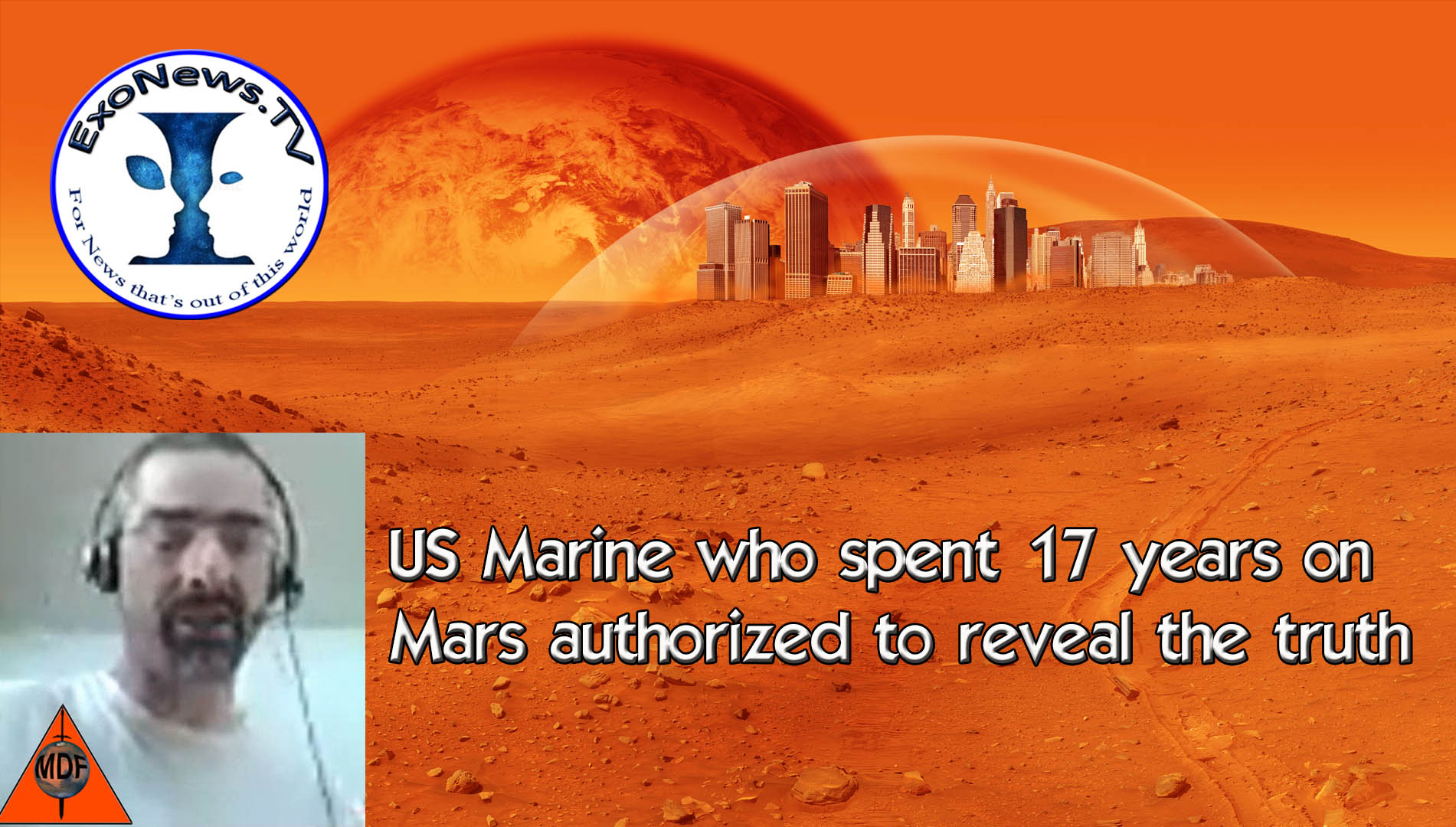 Randy Cramer (aka Captain Kaye, USMC s.s.) who claims to have spent 17 years on Mars and three years serving on a secret space fleet has just released his first newsletter. It has his responses to a number of questions from the general public sent to him by email or Facebook. For those that have followed the Captain Kaye material, there will be fascinating details on issues covered more generally in earlier interviews/articles. Below are some of the highlights from his newsletter and their significance.

The most pertinent information in my opinion is that Randy is still acting under direct orders from his military superiors – a brigadier general and colonel serving in a covert branch of the U.S. Marine Corps called “special section.” This was covered in my last skype interview with him. In the newsletter he says:

Col. Jamieson put me in touch with a man identifying himself as Brigadier General Smythe.  General Smythe gave me a fairly long-winded explanation about the “soulless pricks” (his words) on “the Committee” that he was supposed to answer to, and the serious disagreements by USMC s.s. brass with said Committee.  Without elaborating, I was satisfied with his explanation of the situation on his end.  When he personally gave me the go-ahead (he said, and I quote, “I’m giving you the go-ahead to go public with everything you know…”), I asked, “Everything?” and he said, “EVERYTHING!”, and then we had a deal.  As long as I had the assurance that my direct chain of command was behind me and that I had no restrictions on truthful content, I knew it was for real – and that HE was for real.  No one – not even an enemy – would want me to do that, or tell me to do that.  He even said I could use his name, which I just did, to let the people who need to know, that I answer to him, and only to him… and if they didn’t like it, they could take it up with him, or the CMC.

One of the issues covered during his interviews was that the mind control techniques used on him and other Marine Corps s.s. recruits was not trauma based as was common with other covert programs. Here Randy gives more details on the two different types of mind control used by covert military services:

The techniques used to make me have been described to me as a “with-the-grain” style of programming as opposed to most “against-the-grain” styles of programming that try to force Super Soldiers to kill anything, anytime, anywhere – and as human animals, most of us just aren’t made that way, so we resist – and the main function then becomes ‘suppressing’ the urge to resist. Rather than creating the best Super Soldier you can, you only create the most compliant.  The “with-the-grain” style programming doesn’t try to create something that kills on command, but, rather, it creates a deep seated instinct to protect its tribe and its territory when threatened.  So, as long as you can explain the threat credibly, the soldier will use all of its strength and cunning to destroy any that would harm those it’s genetically predisposed to protect.

Randy comments on the nature of compartmentalized projects and the power acquired by project directors. This is pretty consistent with what other whistleblowers have revealed about covert programs that have increasingly become rogue operations:

It would appear that what was once a fairly cohesive effort by a handful of covert programs to deal with the ET/exobiological/technological issues, is no longer cohesive, and nor is it just a hand full.  It seems that it has degraded into a feudal style conflict where every ‘Deep Black’ program director who has a measure of control in the larger equation is refusing to share data, while trying to steal and acquire everyone else’s data – while trying to keep his/her sub-programs hidden so they cannot be stolen.  Alliances are made and broken.  All high technology is just used to spy and steal from each other with the hope that whoever wins the ‘Deep Black race’ will get to rewrite all the rules and make the world in their image; because, quite simply, there will be NO ONE to stop them from doing so with all the competition eliminated, or left in the dust.

In his response to a question about his arrival on Mars, Randy says that his first experience was stepping out into the open which is breathable. Other Mars whistleblowers have said similar things and of course there are many Mars Rover images of animals roaming the surface of Mars. Randy’s testimony is more evidence that NASA is lying that the atmosphere is 96% CO2 with trace amounts (0.15%) of O2. His account of the transfer station sounds like the kind of open air conditions one finds in landing at many small airports.

We touched down at Aries Primus, HQ of the MCC (Mars Colony Corporation) and the MDF (Mars Defense Force).  To my surprise, we walked down the gangplank and right out into the Martian air.  The air was thin and cool, but the sun was beating down enough to feel it.  Even though it’s dimmer, the sun can still be quite hot and bright in the direct light.  We walked, in a line, to personnel with scanners in their hands who would scan your transfer packet, and then direct you to whichever shuttle pad was to take you to your duty station.

I boarded a small shuttle that looked like a soda can that had been through hell and back.  It was long and narrow, and had two rows of seats against the side walls facing each other.  You could fit about 32 people (plus, two flight crew) inside.  It was a noisy and rough ride, and when I got out, we were in the motor pool/main hangar of Forward Station Zebra: my new home for the next 17 years.

When asked about the moon landing by Neil Armstrong and Buzz Aldrin, Randy commented about how the moon program was a cover and that many were surprised Armstrong didn’t say more before his death. One likely reason is that Armstrong received death threats against him and his family if he revealed to others before his death:

… we know the covert program was on the moon in the Fifties, and on Mars in the Sixties – but only a few people knew that.  To everyone else, the NASA program was all there was.  Several astronauts of the Mercury program had said they thought they were just “spam in a can”, and that the real deal must be in some deeper program.  A lot of us thought Neil Armstrong might do a deathbed confession, but he went to the grave with what he knew.

Finally, Randy claims that President Eisenhower created the US Marine Corps special section in 1953 as a counterweight to the MJ-12 Group. That makes a lot of sense given the long history of the Marines and Eisenhower’s suspicions about the growing power of MJ-12 that culminated in his 1958 threat to invade area 51/S4:

President Eisenhower (‘Ike’) created USMC s.s. because he didn’t trust “those MJ-12 boys”, and he wanted a military unit (disciplined and oath driven, not like intelligence community people), and he wanted them to be marines because he wanted them to have the highest ethical and moral fiber.  So they recruited their first officer class from the Navy and the Marine Corps, before they created their own officer academy, because Sailors and Marines have a shipmate and teammate mentality.  We all work together, or we all go down with the ship – essentially.  This distinction has a ripple effect that makes Navy and Marine command structure TOTALLY different from Army or Air Force, which is where the main corruption comes from: greedy conquerors (fucking Legionnaires) – mix that with the T2 eugenicists, and you have a global nightmare the Nazis only envisioned in their wettest dreams.

Randy’s newsletter has much more fascinating information in it and is well worth reading.

For the moment, there hasn’t been much in the way of direct confirmation of Randy’s claims other than whistleblowers such as Andy Basiago, J.D., corroborating some of the details he revealed about bases on Mars:

After careful analysis, I have concluded that the Mars testimony of Captain Randy Cramer is truthful. I am convinced that Randy is “the real deal.”

More needs to be done in that regard and perhaps that’s where Randy’s superiors in the chain of command can help him, if they really desire disclosure to move forward quickly. Nevertheless, Randy’s revelations about Mars and the secret space fleet  are certainly something to deeply consider as we move inexorably towards a world where some truths about extraterrestrial life are finally revealed, but other elements of the cover up are likely to continue in rogue covert programs.