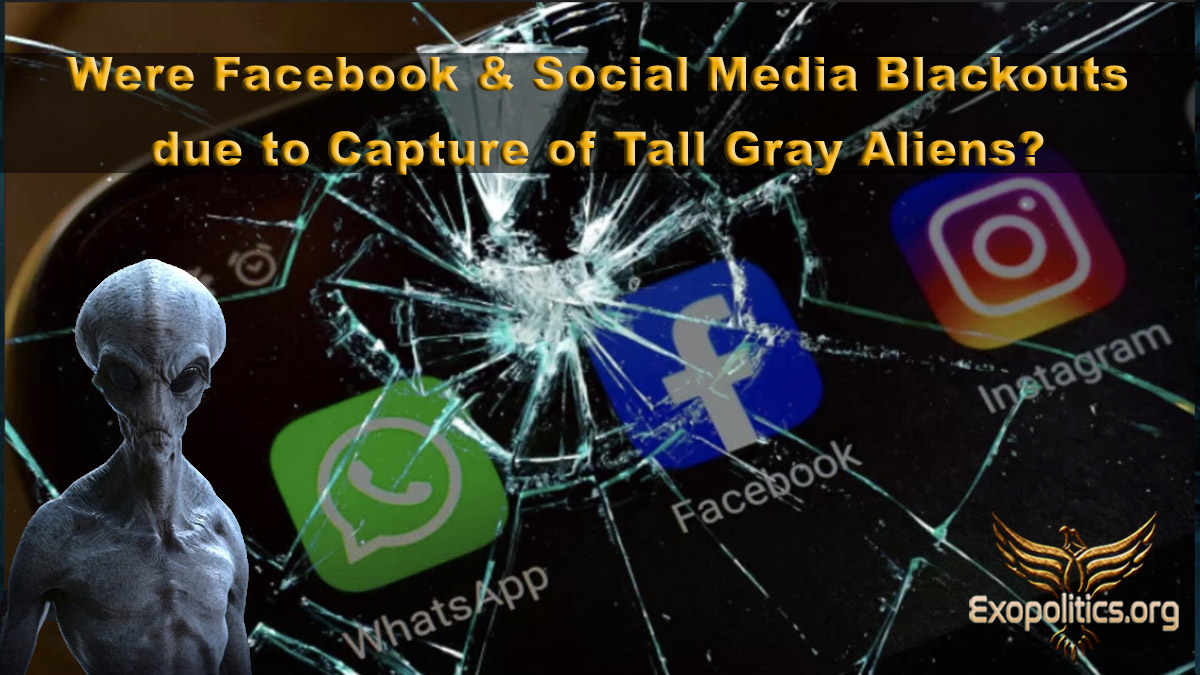 Were Facebook & Social Media Blackouts due to Capture of Tall Gray Aliens?

On October 3, I reported on the sensational news that nine Tall Gray (Eban) extraterrestrials had been captured by the Galactic Federation of Worlds only four days earlier, which has sparked quite a bit of online interest and debate. These Grays were allegedly the same leadership group that had reached agreements with the Eisenhower Administration in the 1950s, and were subsequently key players in the New World Order that had been secretly set up by their Deep State partners. Only five days after the reported capture, Facebook, Instagram and Whatapp all experienced blackouts on October 4. A coincidence? Not so according to the latest updates from two Galactic Federation representatives, Val Nek and Thor Han, as relayed through independent sources.

In my October 3 article, I discussed how the Tall Grays were being kept in stasis chambers so as to disconnect them from their hive queen, which effectively was keeping them alive. The Galactic Federation was trying to crack the code of their connection since capturing Tall Grays alive for study purposes is apparently quite rare as the hive queen immediately terminates them after capture.

It appears that the Galactic Federation’s capture of the Tall Grays had significant repercussions for the global internet. This was especially the case for major social media companies, which had long ago been infiltrated and compromised by the Tall Grays, who had set up a mind control system through the internet that uses specific frequencies to manipulate humanity.

Here is the information from Val Nek, which I received from Megan Rose on Sept 4:

We are changing internet servers from a CIA controlled service to a different, non-hackable server that is run by the [Earth] Alliance. The war on information has been going on for a very long time. There are security threats to citizens as long as these servers remain operable and in control of the dark fleet and its allies. The United States has made agreements, during the Jupiter meetings, to use technology created by the Alliance for this project. This project is very large as it involves the internet systems that are responsible for most of Terra’s internet. Many internet providers are run by private companies without the proper security features. This will change. We are in the process of dismantling these systems and replacing the old with new. I salute you.

The gist of what Val Nek is saying here is that the Tall Grays are experts in being able to hack into electronic systems and insert all kinds of stealth technologies to that promote their long-term agenda. The CIA has been the principal US agency that has worked with the Tall Grays and Draco Orions, on behalf of the Majestic 12 Group, to create a planetary surveillance and communications system that was deeply compromised.

The Galactic Federation had begun working with the “Earth Alliance”— White Hats and the Space Commands of the 14 spacefaring nations that attended the Jupiter meetings in July 2021— to set up a secure planetary defense system that would prevent the Grays, the Reptilians, and other negative groups from infiltrating the Earth using wormholes, portals and interdimensional travel technologies. Apparently, this upgraded security system provided by the Galactic Federation to the Earth Alliance was also being incorporated into the global internet.

Val Nek’s next update on October 4 gave more details about the upgrade to the Earth’s internet made possible from the incorporation of the same technologies used for the planetary defense system:

VN: These frequencies have been recalibrated to a higher frequency, similar to much of the technology that is being used for planetary defense. These frequencies, the codes to them, are in the hands of the Earth Alliance. The Earth Alliance will be responsible for the codes of the new internet systems. This is important to note because the Nebu can hack into the old internet systems, the way it was designed before. Much like a portal, we were able to unlock their internet system using the frequency key we have recently recovered. It is like “cracking a code” so to speak. A quantum configuration that is also a mathematical equation, it is a frequency. This is good news.

The Federation will continue to work with the Alliance to secure Terra’s internet and forms of communication. For a long time, many years, the Nebu have used lower frequencies to broadcast the internet which are harmful or at least not ideal for Terrans….it is a frequency that is compatible with their mind control agenda. This will change, thanks to the agreements made between the Federation and Alliance.

M: When you said Dark Fleet and its allies in your first bit of intel, did you also mean Nebu as well?

VN: Yes of course the Nebu are involved…. the three-letter agencies, what can I say…. there is a small faction of humanoid extraterrestrials that also work alongside the Ciakahrr Empire and the now dismantled Dark Fleet, they are involved also.

Val Nek’s update is exciting news. The codes and frequencies embedded into Earth’s global communications and satellite systems—originally set up by the CIA—had long ago been compromised by Tall Grays. These codes had been recalibrated to the higher frequencies used by the Planetary Defense Grid.

As I discussed in a previous article, these higher frequencies are unhackable, thereby making it impossible for the Grays, the Reptilians, and their allies to control the global internet. In short, the social media blackouts were caused by the recaliberation of the global internet using secure frequencies, which was now under the control of the Earth Alliance.

This takes me to information independently shared by Thor Han (TH) as relayed through his contact Elena Danaan:

TH: “these servers are now under the control of the Earth Alliance. I told you, that your internet will change. We will now be able to go forward with the new technology we are offering to you. The Earth Alliance will set this in place. Anything that is owned by the CIA is being taken down.”

TH said: “they [the servers] are being disconnected from the Nebu hive queen.” …

TH just said they have changed the frequency of these servers and will put them back, but they are now disconnected from the Nebu frequencies.

I received Elena’s information in real time during the blackout of Facebook. Once again, the CIA is identified as the lead agency responsible for compromising the global internet to enable codes and frequencies transmitted by the Tall Grays and their hive queen to mind control the planet. Thor Han’s reference to the servers now being under the control of the Earth Alliance means that the backbone of the global internet is no longer controlled by the CIA and their Tall Gray overlords. The consequence of this will be very powerful as the codes and frequencies embedded in the global internet would no longer work for the Tall Grays and their minions.

Importantly, employees working in Facebook, WhatsApp, etc., will no longer be mind-controlled through the codes and frequencies embedded in CIA-controlled servers that their companies were unwittingly using. This means that many employees that are on the political left, who had mindlessly implemented algorithms and policies to stifle free speech without giving it a second thought, will now realize the consequences of their actions.

This will certainly not transform the internet overnight, but it will begin the awakening process, and help restore integrity to the people and social media companies that control it.

What Val Nek and Thor Han have revealed gives us a possible explanation for the real reason behind the global blackout of Facebook-controlled social media companies on October 4. The fact that the blackouts happened less than a week after the reported capture of the Tall Grays does point to a causal connection. If what Val Nek and Thor Han have reported is accurate, we will not need to wait long to see noticeable differences in the way Facebook and other social media companies conduct themselves when it comes to censorship, shadow banning, and other egregious practices that have stifled free speech and the great awakening on our planet.

I wish to thank Megan Rose and Elana Danaan for relaying Val Nek and Thor Han’s updates. Their respective YouTube channels are here and here.

Note: On October 9, I will hold my final webinar for 2021 on the topic of “Galactic Federations, Councils & Secret Space Programs.” The Webinar will conclude with a special panel featuring Elena Danaan, Megan Rose, and myself.

[Video Version of this article is available on YouTube and Rumble. Podcast version will be available on Apple, Spotify & Google]

For a complete list of articles and interviews concerning the Galactic Federation and/or featuring Elena Danaan, Megan Rose,  and other sources click here. 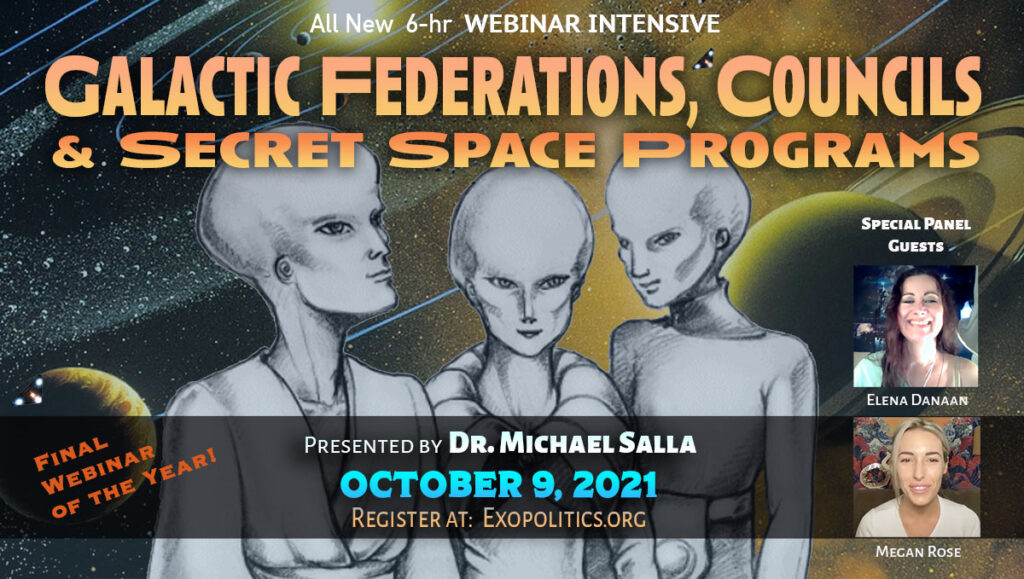