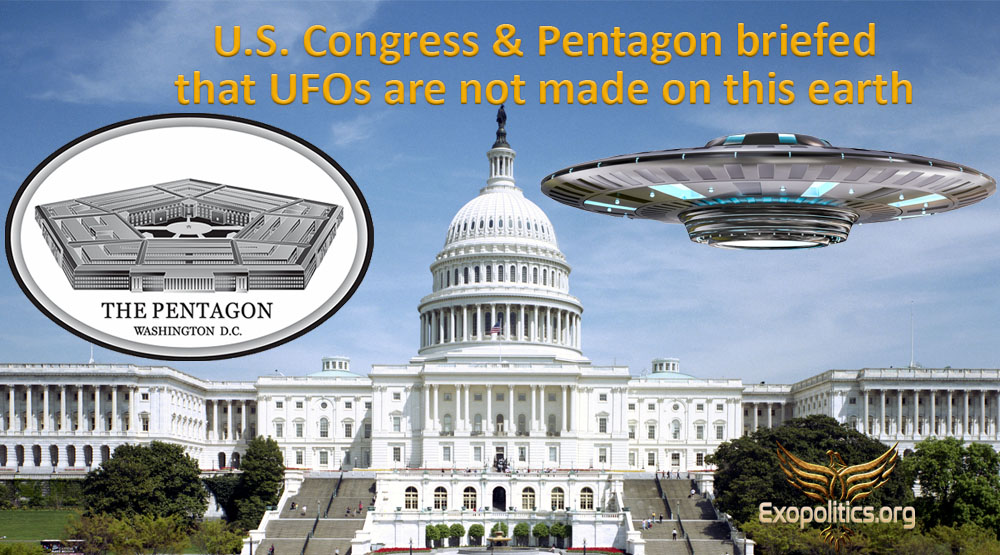 U.S. Congress & Pentagon briefed that UFOs are not made on this earth

The New York Times has just released a bombshell article on classified UFO briefings received by members of U.S. Congress and Pentagon officials that the craft involved are “off-world vehicles not made on this earth”. The New York Times (NYT) story cites Dr. Eric Davis, a physicist currently working with the Aerospace Corporation, who gave briefings that classified corporate studies were being conducted on the “off-world vehicles” recovered and held in corporate facilities.

The authors of the NYT story, Ralph Blumenthal and Leslie Kean wrote the following about Dr. Davis’s groundbreaking briefings:

Mr. Davis, who now works for Aerospace Corporation, a defense contractor, said he gave a classified briefing to a Defense Department agency as recently as March about retrievals from “off-world vehicles not made on this earth.”

Given Davis’s revelations it’s therefore not surprising that the Senate Select Committee on Intelligence asked the Intelligence Community to write a comprehensive report on Unidentified Aerial Phenomena (UAPs aka UFOs) in six month. This request was included in the proposed Intelligence Authorization Act for Fiscal Year 2021:

The Committee supports the efforts of the Unidentified Aerial Phenomenon Task Force at the Office of Naval Intelligence to standardize collection and reporting on unidentified aerial phenomenon, any links they have to adversarial foreign governments, and the threat they pose to U.S. military assets and installations.

Of particular note was Rubio’s recent comments in an interview that the UFO craft have been recorded flying over U.S. military bases, which is a far more significant revelation than the unknown craft flying over the ocean in Navy testing areas as evidenced in leaked videos recently acknowledged by the Navy as genuine.

Dr. Davis’s testimony is important since, in 2019, a 15-page document was leaked of his conversation with a former head of the Defense Intelligence Agency (DIA) in 2002. In the conversation, Vice Admiral Thomas Wilson revealed to Davis details about an incident in 1997 when he was denied access to a classified UFO program run by a major aerospace corporate contractor despite being, at the time, the Deputy Director of the Defense Intelligence Agency and Vice Director for Intelligence (VJ2) for the Joint Chiefs of Staff.

Wilson appealed unsuccessfully to the Special Access Programs Oversight Committee (SAPOC) that had authority over the corporate-run program. Surprisingly, the Committee ruled in favor of the corporation that Wilson did not have a demonstrable “need to know”, and therefore he was denied access.

The corporate contractor’s power stemmed from a 1994 agreement reached with SAPOC that gave the corporation the authority to restrict access to UFO related programs from Pentagon officials regardless of their rank and position, as Wilson complained about in the leaked 15-page document:

Special criteria were established in agreement. A special circumstance that must meet rigorous access criteria set by contractor committee. No USG personnel are to gain access unless they met the criteria – to be administered by contractor committee (program director, attorney, security director) irregardless of the tickets and position USG personnel possess. Literally their way or the highway. [Transcript/Summary p. 11]

Nevertheless, Wilson subsequently learned that the corporate contractor had been unsuccessfully attempting to reverse engineer a retrieved extraterrestrial vehicle. He wanted to know if Davis, who at the time worked with EarthTech, an Austin, Texas-based organization involved in advanced studies of aerospace technologies, knew anything more about the corporate UFO program.

The fact that the New York Times has run the story involving Davis and his knowledge of the corporate-run reverse engineering company is highly significant. As the official “paper of record”, the NYT is now opening the door to mainstream media sites picking up the threads of Davis’s astounding revelations and the leaked transcript of his 2002 conversation with Vice Admiral Wilson.

The likely narrative that will be emerging from the NYT story is that classified corporate-run programs on recovered extraterrestrial craft are very real, and not the imagination of UFO conspiracy theorists. This development will astound many working professionals that have ignored decades of testimonial evidence that such programs were being secretly conducted at multiple military and corporate facilities.

What remains to be answered is how did the corporations get their hands on recovered UFO craft, and were able to keep key Pentagon officials such as Admiral Wilson out of the loop? Why did the Pentagon officials running the Special Access Program Oversight Committee deny Wilson access despite his very senior status at the DIA and Joint Chiefs of Staff?

Another important question to ask is whether the information that corporations have made very slow progress in reverse engineering of retrieved extraterrestrial craft, as Wilson revealed to Davis in their 2002 conversation, is to be believed. According to multiple insider accounts discussed in my Secret Space Programs Book series, reverse engineering of captured flying saucer craft began in the 1940s, the first prototype craft were flight tested in the 1960s, and were subsequently deployed in the 1970s and 1980s.

While there may be ongoing reverse engineering programs in corporations that are making slow progress, as Admiral Wilson was told in 2002, there is much testimonial evidence that major aerospace corporate contractors have made significant progress decades earlier.

Why therefore release into the public arena information that select U.S. corporations have been conducting slow and largely unsuccessful studies of captured extraterrestrial craft? A possible answer is that those in charge of the reverse engineering programs in the U.S. don’t want the public to know that such technologies were successfully reverse-engineered and deployed decades ago by the U.S. Air Force and Navy in collaboration with select U.S. corporate contractors.

Furthermore, the NYT story contributes to the narrative that other nations, e.g., China and Russia, have gotten their hands on similar off-world technologies and they have successfully reverse-engineered these, and may be behind the UFO/UAP sightings by Navy pilots as Senators Rubio and Reid have been speculating.

Such a conclusion feeds the perception that the U.S. is behind China and Russia on developing such breakthrough technologies, and that extraterrestrials constitute the ultimate threat if they suddenly choose to intervene in human affairs.

Many will rightfully interpret the New York Times story as promoting a narrative that leads to a possible alien intervention that may be either genuine or contrived by those possessing such reverse-engineered technologies that were successfully studied in corporate facilities decades ago. Nevertheless, many inquiring minds will be inspired to dive deep into the UFO and “exopolitics” literature to learn the truth about classified alien reverse-engineering programs that insiders and researchers have been disclosing for years, often to widespread ridicule and retribution from their peers.

[Note: an Audio version of this article is available here]